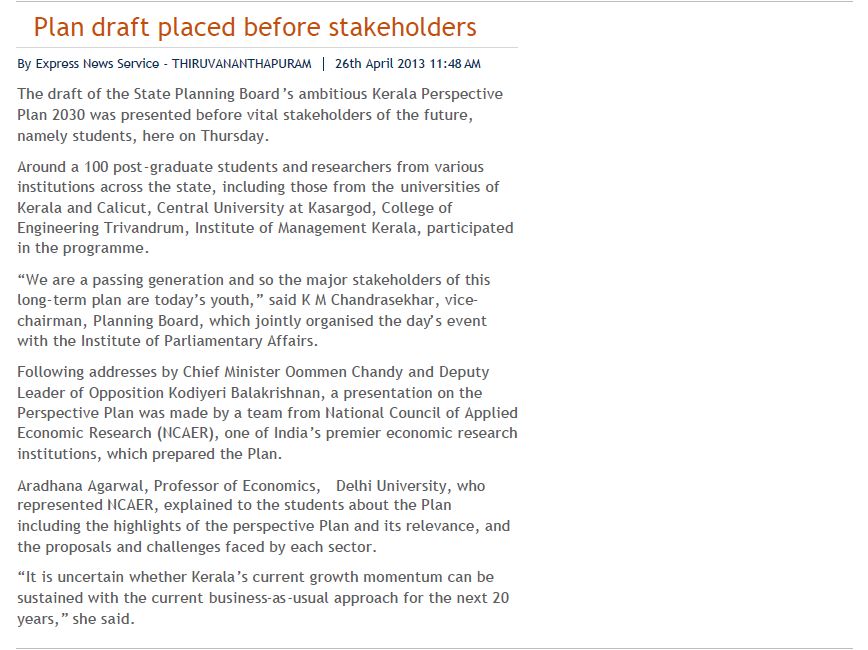 THIRUVANANTHAPURAM:The draft of the State Planning Board ’s ambitious Kerala Perspective Plan 2030 was presented before vital stakeholders of the future namely students here on Thursday.

Around a 100 post-graduate students and researchers from various institutions across the state including those from the universities of Kerala and Calicut Central University at Kasargod College of Engineering Trivandrum Institute of Management Kerala participated in the programme.

“We are a passing generation and so the major stakeholders of this long-term plan are today’s youth” said K M Chandrasekhar vice chairman Planning Board which jointly organised the day’s event with the Institute of Parliamentary Affairs.

Following addresses by Chief Minister Oommen Chandy and Deputy Leader of Opposition Kodiyeri Balakrishnan a presentation on the Perspective Plan was made by a team from National Council of Applied Economic Research (NCAER) one of India’s premier economic research institutions which prepared the Plan.

Aradhana Agarwal Professor of Economics Delhi University who represented NCAER explained to the students about the Plan including the highlights of the perspective Plan and its relevance and the proposals and challenges faced by each sector.

“It is uncertain whether Kerala’s current growth momentum can be sustained with the current business-as-usual approach for the next 20 years” she said.