Opinion | An inclusive strategy for India to revive its economic growth 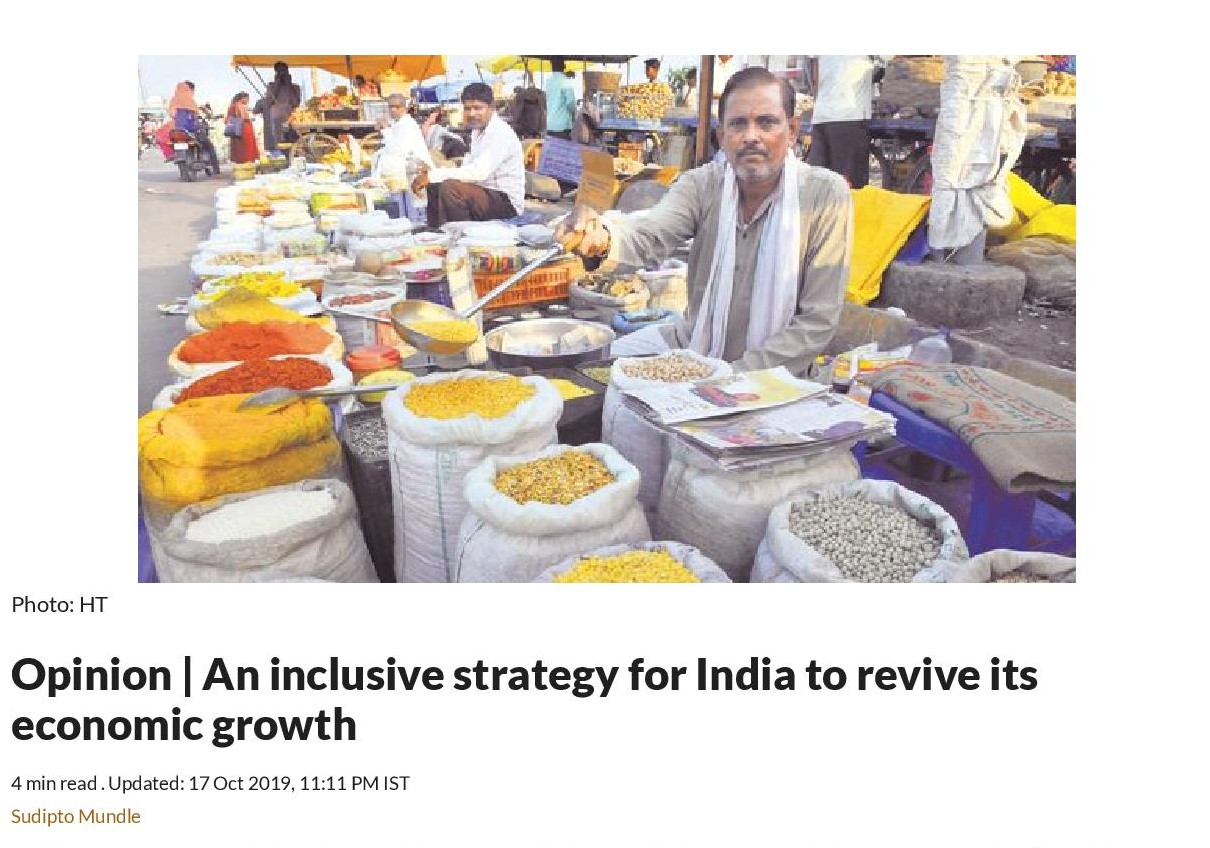 Putting more money in the hands of the poor who have a high propensity to consume should be the aim of our fiscal policy.

Abhijit Banerjee Esther Duflo and Michael Kremer have just been awarded the 2019 economics Nobel for their work on combating poverty. Banerjee Raghuram Rajan and others have also underlined the seriousness of the growth slowdown in India. There could be no better time to argue the case for an inclusive strategy to revive growth.

From a peak of 8.1% in the fourth quarter of 2017-18 growth in gross domestic product (GDP) has now decelerated to a six-year low of 5% in the fiscal first quarter with a slowdown visible across all sectors. Particularly important in this context is the compression of government expenditure. Central government revenue grew only 6% last year more than 11% short of the budget estimate. Accordingly expenditure growth was compressed to 6.9% last year down from more than 11% the year before. Weak revenue growth meant devolution to states also fell short forcing them to cut expenditure. This compression of government spending at a time when all major components of aggregate demand were already slowing has been an important driver of the sharp decline in economic growth.

We now require a macroeconomic strategy to revive aggregate demand in the short-run while initiating structural reforms to sustain growth over the long-term. Given the grim global economic environment reliance will have to be placed on internal sources to generate demand. The measures the government has announced are largely in response to demands of specific interest groups such as foreign portfolio investors real estate companies automobile companies etc. These have mostly been piecemeal supply-side interventions which may help these specific interest groups but won’t reverse the collapse in aggregate demand.

The Reserve Bank of India (RBI) has repeatedly cut the repo rate to revive demand and has also taken other measures to ease the availability of credit. However in real terms the policy rate is still rising and these steps have amounted to pushing on a loose string because the binding constraint on credit flow appears to lie elsewhere—in the lack of credit demand in some segments and credit exposure limits in others. With limited traction for monetary policy the burden of growth stimulation must fall mostly on fiscal policy. Here the unrealistic assumptions of the 2019-20 budget are quite worrying. It has been assumed that tax revenue and total revenue will grow by 25.3% and 25.6% respectively though they both grew by only 8.9% in 2018-19. The expenditure targets are equally unrealistic. Hence there will be another large revenue shortfall and corresponding expenditure shock this year further reducing growth.

Clearly the 2019-20 budget will have to be substantially revised in the winter session of Parliament or earlier to arrest the crisis. In fact tax policy has already been revised after the budget with a large reduction in corporate tax rates. These are likely to have a strong positive impact on growth in the medium- to long-term. In the short-term though they will exacerbate the revenue shortfall as the government itself has pointed out. In comparison the impact of an increase in government spending would be direct and fast especially if it puts more money in the hands of poor consumers who have a high propensity to consume. That would have a strong multiplier effect and this should be the guiding principle for an inclusive fiscal strategy to revive growth.

However such spending cannot be financed through more borrowing. The total public sector borrowing requirement for the Centre states and public enterprises amounts to over 9% of GDP while household financial savings amount to only 7% of GDP. With such severe crowding out the deficit needs to be shrunk not increased. So what should be done?

Extraordinary conditions call for extraordinary measures. Deep fiscal reforms could create enough fiscal space to substantially increase pro-poor spending and revive growth while reducing the fiscal deficit; all this without raising tax rates. If this sounds too good to be true here is the arithmetic. The revenue shortfall in 2018-19 was mainly on account of a leaky goods and services tax administration based on an incomplete electronic information system—the Goods and Services Tax Network (GSTN). Further the 2019-20 receipts budget shows the government is foregoing revenue to the tune of 5% of GDP on account of tax concessions and exemptions whose public benefit is unclear. Another 5% of GDP is typically spent on non-merit subsidies. Further the Comptroller and Auditor General has estimated that savings due to excess appropriations amount to 1.5% of GDP. Fixing the GSTN on a war footing paring down tax exemptions and rationalizing subsidies can free up fiscal space to the tune of 6-7% of GDP.

This can be used to finance an inclusive growth revival strategy with three components. First building on the PM-Kisan programme Maitreesh Ghatak and Karthik Muralidharan in a paper An Inclusive Growth Dividend: Reframing The Role Of Income Transfers In India’s Anti-Poverty Strategy have made a compelling case for extending the â‚¹6000 income support per farmer to all citizens which would cost 1% of GDP. This income support could be increased to â‚¹12000 per citizen per year doubling the cost to 2% of GDP. This support could grow with the economy.

Second education health and infrastructure are all underfunded. Additional funding of 1% of GDP could be provided to each of these. Lastly the remaining fiscal space could be used to cut the fiscal deficit.