Only 40 per cent of middle class has piped water connection: survey 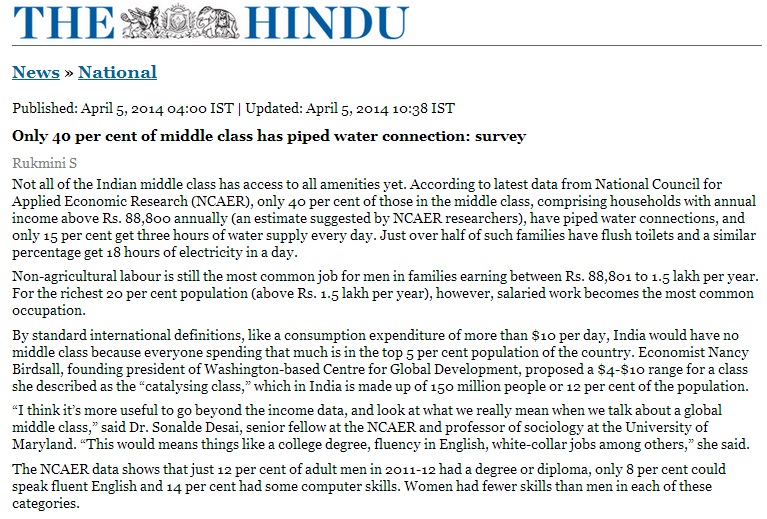 Not all of the Indian middle class has access to all amenities yet. According to latest data from National Council for Applied Economic Research (NCAER) only 40 per cent of those in the middle class comprising households with annual income above Rs. 88800 annually (an estimate suggested by NCAER researchers) have piped water connections and only 15 per cent get three hours of water supply every day. Just over half of such families have flush toilets and a similar percentage get 18 hours of electricity in a day.

By standard international definitions like a consumption expenditure of more than $10 per day India would have no middle class because everyone spending that much is in the top 5 per cent population of the country. Economist Nancy Birdsall founding president of Washington-based Centre for Global Development proposed a $4-$10 range for a class she described as the “catalysing class” which in India is made up of 150 million people or 12 per cent of the population.

“I think it’s more useful to go beyond the income data and look at what we really mean when we talk about a global middle class” said Dr. Sonalde Desai senior fellow at the NCAER and professor of sociology at the University of Maryland. “This would means things like a college degree fluency in English white-collar jobs among others” she said.

The NCAER data shows that just 12 per cent of adult men in 2011-12 had a degree or diploma only 8 per cent could speak fluent English and 14 per cent had some computer skills. Women had fewer skills than men in each of these categories.