No economy for women 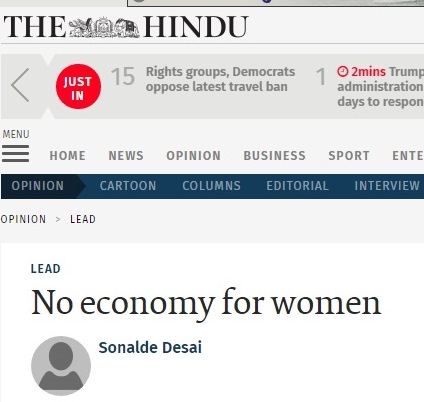 According to a recent report by the International Labour Organisation (ILO) India and Pakistan have the lowest rates of women’s labour force participation in Asia in sharp contrast to Nepal Vietnam Laos and Cambodia that have the highest with richer nations like Singapore Malaysia and Indonesia falling in between. Moreover even this low rate of labour force participation seems to be declining. The National Sample Survey found that while in 1999-2000 25.9% of all women worked by 2011-12 this proportion had dropped to 21.9%. This is in stark contrast to worldwide trends. Of the 185 nations that are part of the ILO database since the 1990s 114 countries have recorded an increase in the proportion of women in the workforce and only 41 recorded declines with India leading the pack. So what does this tell us about India’s growth story?

A heartening explanation could be that with rising incomes women have the opportunity to escape harsh labour in farms and on construction sites and focus on their families. But a more pessimistic and possibly realistic explanation might be that with declining farm sizes rising mechanisation and consequently dwindling labour demands in agriculture women are being forced out of the workforce. If true this has serious implications for future policy.

Research has shown that when women have access to more work opportunities they gladly take them. The India Human Development Survey (IHDS) jointly organised by researchers from the National Council of Applied Economic Research (NCAER) and the University of Maryland finds that the provision of work under the Mahatma Gandhi National Rural Employment Guarantee Act (MGNREGA) has brought more rural women into wage labour. Among MGNREGA workers in 2011-12 a whopping 45% were not in wage labour before the scheme was initiated.

Moreover the provision of MGNREGA work has far greater impact on women’s paid work than that of men. Increased availability of wage work also enhances women’s control over household decision-making.

Since NREGA work by itself cannot be expected to provide consistent stable employment for women it is imperative to explore other avenues. From a policy perspective two main challenges have to be addressed for augmenting women’s workforce participation rates. First in view of shrinking farm work we need to create opportunities for women to move from agricultural to non-agricultural manual work. Second we must foster a work environment that allows more women especially urban and educated women to take up salaried jobs.

In her research Lei Lei a sociologist at the University of Maryland finds that in villages where roads were constructed between the first (2004-05) and second (2011-12) waves of IHDS both men and women were more likely to undertake non-agricultural work but this effect was greater for women. Such work has a cascading effect as construction of concrete roads also improves transportation services such as buses which in turn could facilitate movement of the rural workforce especially women into non-agricultural work in neighbouring villages and towns.

At the other end of the employment spectrum however there is a need to make it possible for educated women to continue to work even while raising families. In a context where women continue to bear the major share of household work and childcare the prevalence of a rigid work environment in India and the dearth of family-friendly work institutions create impediments to women’s access to white-collar jobs in the formal sector. Second long distances between the home and the workplace increase both commuting time and work burdens leaving workers with even less time for family duties.

Another aspect of the skewed work-family equation for women in India is the demand for investing in children’s education over professional achievement. Research by Alaka Basu a sociologist at Cornell University and Sonalde Desai (co-author of this article) highlights the contrast between the reasons for fertility decline in the West where it was fuelled by the desire for self-fulfilment among both men and women and in India where small families have emanated from the desire to promote future achievements of children by focusing on their education rather than on better employment prospects for the parents. This has led to urban and educated Indian women dropping out of the labour pool in contradistinction to their counterparts in Japan and Korea for example who have instead opted out of marriage resulting in a dip in fertility rates in the latter countries to barely 1.3 child(ren) per couple. Neither of these however seems an optimal outcome for society. The only way this conundrum can be addressed is by encouraging workplaces to become more responsive to family needs and to promote sharing of household responsibilities between both genders — something that Scandinavian countries have emphasised.

Few organisations are willing to consider challenges involved in generating a work-life balance. Even before the influx of global firms in India work structures in Indian companies and even the government were highly inflexible. Over the past two decades these demands have grown. With rising global competition Indian firms have chosen to follow the American model with demands for extended work hours as well as attendance on Saturdays and Sundays. This creates a time bind for both men and women where something must give.

An interesting repercussion of this work dynamic is reflected in a recent study titled ‘Millennial Careers: 2020 Vision’ by ManpowerGroup conducted across 25 countries and encompassing 19000 working millennials and 1500 hiring managers. The study found that young workers in India worked 52 hours per week as against say 42 hours by their counterparts in Canada. Work-family balance requires increased participation by men in household chores and caring for children. However workplace inflexibility makes for difficult choices involving trade-offs betweeln investing in careers of husbands vis-à-vis those of wives often resulting in women taking a back seat and at times even dropping out of the workforce.

The Economic Survey 2016-17 expressed concern that the demographic dividend is already receding reducing the opportunity for the Indian economy to catch up with its East Asian counterparts. However the numeric consequences of reducing obstacles to women’s full economic participation far exceed the demographic advantages of having a larger pool of young workers. It is thus high time to talk of the gender

Sonalde Desai is professor of sociology at University of Maryland and senior fellow at the National Council for Applied Economic Research (NCAER); Anupma Mehta is editor at NCAER. Views expressed in this article are personal.