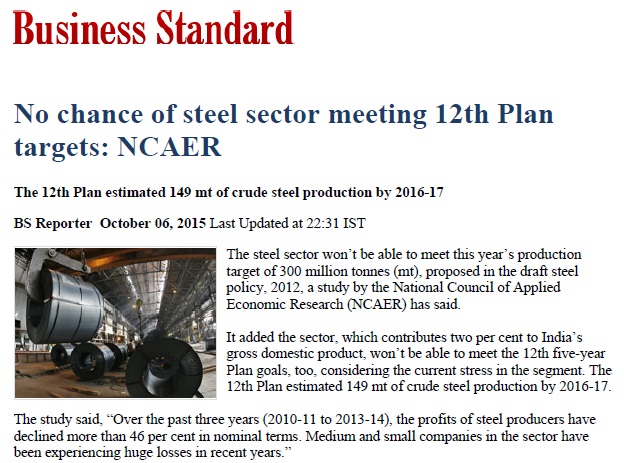 The steel sector won’t be able to meet this year’s production target of 300 million tonnes (mt) proposed in the draft steel policy 2012 a study by the National Council of Applied Economic Research (NCAER) has said.

It added the sector which contributes two per cent to India’s gross domestic product won’t be able to meet the 12th five-year Plan goals too considering the current stress in the segment. The 12th Plan estimated 149 mt of crude steel production by 2016-17.

The study said “Over the past three years (2010-11 to 2013-14) the profits of steel producers have declined more than 46 per cent in nominal terms. Medium and small companies in the sector have been experiencing huge losses in recent years.”

Many steel firms it said were experiencing debt servicing woes and resorting to debt restructuring with increasing incidence of non-performing assets. “Many companies in the secondary sector are experiencing an increasing excess capacity and are on the verge of a collapse unless special financial assistance is provided” it added.

It cited several high-profile exits from capital expenditure plans involving companies such as Posco ArcelorMittal and JSW Steel indicating among other things their downbeat assessment of the prospects of investments in India.

Identifying 11 roadblocks the study said the solutions needed were “transformational” and beyond the mandate of the steel ministry. “The NITI Aayog is the right venue for consensus building on steel policy with support from the steel ministry and other ministries and think tanks” it said. The roadblocks cited include lack of demand decline in competitiveness and a surge in imports financial fragility excessive taxation and stalemate in land acquisition delays in project implementation and a suboptimal method of mineral allocation.

On the way forward it said the physical infrastructure should be pushed through public investment. Also the government should provide a push to the construction sector and for increasing steel-intensity in construction. “Unless prompt measures are taken for debt relief and improving the profitability of the sector there might be several cases of bankruptcies and the closure of several companies particularly smaller ones” the study said.

NCAER study on The Indian Steel Industry: Key Reforms for a Brighter Future was released on 6 October 2015. Know more