The National Council of Applied Economic Research NCAER released the results of its first round of the Delhi National Capital Region Coronavirus Telephone Survey (DCVTS) on Sunday April 12 2020. The study conducted by NCAER’s National Data Innovation Centre uses a scientifically designed rapid telephone survey in both the urban and rural parts of Delhi NCR to assess:

The DCVTS interviewed a representative random sample of some 1750 adults covering the entire Delhi NCR during April 3-6 2020.

Key Findings of the DCVTS and Implications

The DCVTS results point to the considerable success in communicating the dangers of the Coronavirus and the importance of social distancing among respondents. An estimated 94.9 per cent of respondents reported the virus to be highly dangerous with an additional 3.2 per cent considering it to be moderately dangerous.

This suggests that people’s ability to distinguish COVID-19 from the common cold or flu will not be easy implying the critical need for more testing of symptomatic cases and cluster testing. Figure 1 illustrates the findings of the DCVTS on the identification of Coronavirus symptoms.

Figure 1: Knowledge of the Symptoms of Coronavirus among Respondents in Delhi NCR:
DCVTS April 3-6 2020 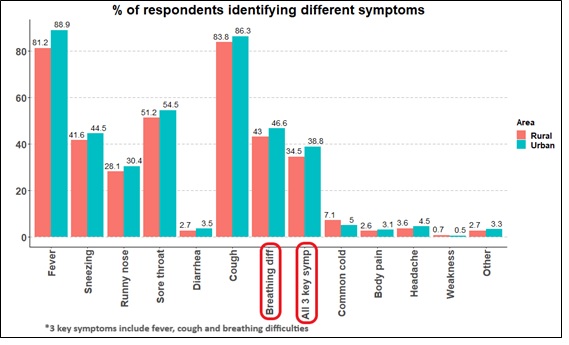 On the impact of the virus on the livelihoods of people the vast majority of the DCVTS respondents reported a reduction in their income or wages in the two weeks before the Survey i.e. since March 20th with the reduction being the lowest for salaried workers and farmers and the most for casual workers. Only 15.5 per cent of households reported that the Coronavirus outbreak has not reduced their income or wages in the two weeks preceding the Survey.   More than half (54.9 per cent) reported that the Coronavirus outbreak had reduced income or wages “very much” and nearly a third (29.6 per cent) reported that income and wages had fallen “somewhat”.  While an estimated 74.5 per cent of casual workers reported that their income and wages had suffered “very much” the corresponding figures were lower for regular salaried workers (46.7 per cent) and farmers (41.6 per cent). It is possible that the effect on farmers could be greater after the harvesting season is over (towards the end of April or May) given that the lockdown and social distancing may make it difficult for farmers to sell and deliver their produce.

On access to essential items in the two weeks prior to the Survey about 29.3 per cent of households were affected by shortages in supplies of food cooking fuel and medicine. There were significant differences between rural (32.6 per cent) and urban (25.3 per cent) households in their experience of supply shortages. The item-wise data shows that 20.7 per cent of respondents experienced shortages of vegetables and fruits (25.2 per cent in rural areas and 15.2 per cent in urban areas) followed by those experiencing shortages of grains and cereals (14 per cent) medicines (8.7 per cent) cooking fuel (7.8 per cent) and milk (6.5 per cent). That about 9 per cent of households experienced difficulty in accessing medicines could lead to serious health implications going forward especially if these shortages get worse over time.

The DCVTS also analysed the perceptions of people about the possibility of their getting infected by the Coronavirus.  The survey found that as of April 3-6 65.3 per cent of respondents did not see any chance of themselves or their household members getting infected. These responses were similar in both rural and urban areas. This finding stands in sharp contrast to the result reported above that nearly 95 per cent of respondents thought the Coronavirus was highly dangerous. There appeared to be a sense of some denial among nearly two-thirds of respondents that though highly dangerous they themselves would not get infected. This denial gap could have serious implications for what happens when the lockdown is lifted if households become complacent believing that they themselves would be immune to the infection.

The study also measured the social distancing practised by respondents during the day before they were surveyed.  To measure this as accurately as possible a ‘contact’ was defined as a two-way conversation in the physical presence of another person or being in the physical presence of another person within six feet or direct physical contact such as sharing a bicycle ride or holding a baby.  This was measured using two types of contacts: contacts inside the house (including household members) and those outside the house. Figure 2 shows that more than half the respondents (53.5 per cent) during the previous day had made no contacts at all outside their home. At the other end a significant proportion of respondents (5.6 per cent) had 10 or more contacts outside the house possibly including people like shopkeepers for essential goods or social workers who could not have practiced social distancing.  The DCVTS also gives an idea of visitors to the home during the previous day with whom the respondent was in contact as shown in the graph assuming reasonably that the respondent had contact with all the members of his or her household.

Social distancing can have other physical or mental health effects. About 36 per cent of respondents mentioned that in the past two weeks they and their household members had curtailed going to a health facility for a medical condition other than a Coronavirus infection.

Figure 2: Social Distancing as Practised by Respondents in Delhi NCR in the 24 hours before being surveyed:
DCVTS April 3-6 2020 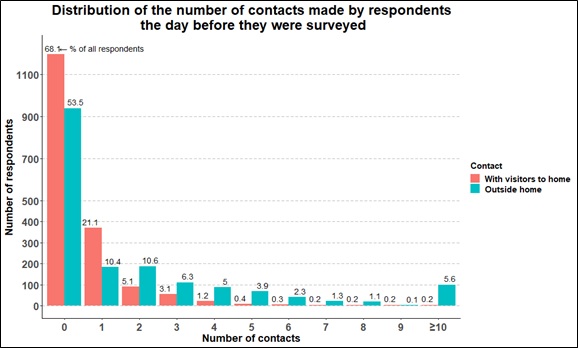 The study further found that in spite of facing difficulties and challenges the majority of respondents supported the idea of extending the lockout period if needed. As many as 86.7 per cent of respondents expressed support for an extension of the lockdown for two more weeks after April 14 2020 with 62.5 per cent strongly supporting the extension and 24.2 per cent supporting it.
These first findings of the DCVTS study (and two other DCVTS rounds that will take place at the end of April and in May) should help understand the overall impact of the Coronavirus pandemic and will be useful for weighing options and deciding the future course of action. It will also aid the design of policy packages that can help restrict the spread of the disease and at the same time seek to protect the incomes and well-being of people particularly those who are the most vulnerable.

A more detailed set of slides and the Round 1 DCVTS survey questionnaire can be downloaded from this link on the NCAER website.

The Delhi NCR Coronavirus Telephone Survey was completed in four days by 41 trained NCAER telephone interviewers during April 3-6 2020. The average length of each telephone interview was 11 minutes. The first round of DCVTS achieved an overall response rate of 77.3 per cent with no difference in the urban and rural response rates in the Delhi NCR.

The DCVTS interviewed a random sample of some 1750 adults representative of the Delhi NCR and comprising 31 districts spread across the four States of Delhi Haryana Rajasthan and Uttar Pradesh. The sample households were selected from 270 clusters (including 132 Census villages and 138 NSS urban blocks) which are a part of the ongoing Delhi Metropolitan Area Study (DMAS) a flagship panel study at NCAER for conducting methodological experiments in data collection within its National Data Innovation Centre.

The DCVTS will be repeated possibly every 3 weeks for at least two more rounds the second in late April and the third in May. The DMAS study provides detailed background data on the DCVTS Round 1 households making possible further in-depth study of these households as they cope with the Coronavirus pandemic and its aftermath.