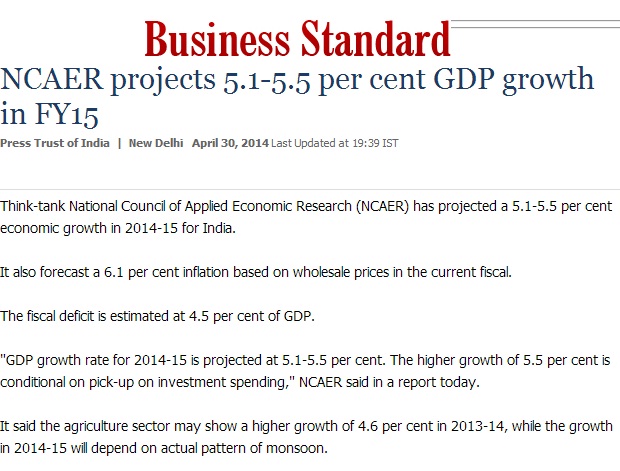 Think-tank National Council of Applied Economic Research (NCAER) has projected a 5.1-5.5 per cent economic growth in 2014-15 for India.

It also forecast a 6.1 per cent inflation based on wholesale prices in the current fiscal.

The fiscal deficit is estimated at 4.5 per cent of GDP.

“GDP growth rate for 2014-15 is projected at 5.1-5.5 per cent. The higher growth of 5.5 per cent is conditional on pick-up on investment spending” NCAER said in a report today.

It said the agriculture sector may show a higher growth of 4.6 per cent in 2013-14 while the growth in 2014-15 will depend on actual pattern of monsoon.

On the price situation the think-tank said said the overall scenario showed a significant improvement in the last quarter of FY 2014.

“Seasonal correction of food prices policy tightening by the RBI and favorable global factors are some of the attributing factors that may prove transient.

“Food inflation will depend on the spatial and temporal distribution of monsoon in the coming season and the extent to which both are affected by El Nino” NCAER said in a report titled ‘Quarterly Review of the Economy’.

Timing and magnitude of revision in administered prices mainly of electricity and coal will also affect the trajectory of inflation in 2014-15 it added.