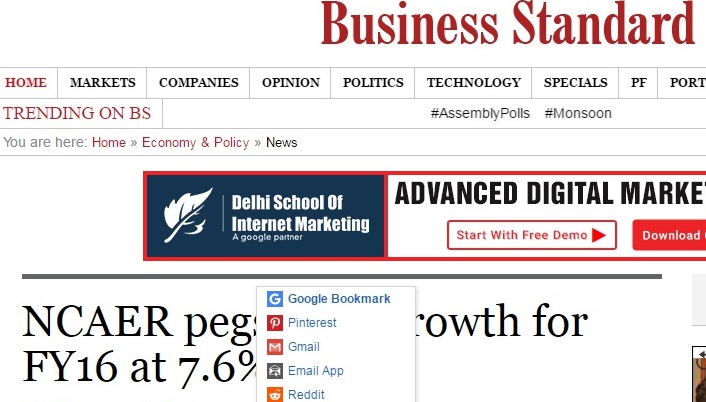 The National Council of Applied Economic Research (NCAER) has scaled up India’s economic growth projection to 7.6 per cent for 2015-16 from the earlier 7.4 per cent. It pegged the growth marginally higher at 7.7 per cent for 2016-17 due to a pickup in the agriculture sector on the back of expected normal monsoon.

“NCAER’s annual model for gross domestic product (GDP) at 2011-12 prices estimates GDP growth rate at 7.6 per cent for 2015-2016 and forecasts it at 7.7 per cent for 2016-17” the council said in its latest quarterly review. In its previous quarterly review it had projected the economy to grow by 7.4 per cent in 2014-15. Its new projections are in line with the government expectations for 2015-16. The data would be released by this month end. NCAER predicted exports to contract 1.6 per cent in 2016-17 which would be their third year of decline. Despite the agriculture sector expected to perform better NCAER believed that the economy would grow just one percentage point higher in the current financial year than that of 2015-16. The government expects the economy to grow in the range of 7-7.75 per cent but said the growth may turn out to be higher if the farm sector performs well. The council said the agriculture sector has witnessed feeble growth on account of drought for two successive years. The average rate of growth in the agricultural and allied sectors’ for 2014-15 and 2015-16 has been a low 0.5 per cent. Two consecutive years of sub-par monsoon have had a significant impact on the output of both food as well as non-food crops.

NCAER pegs GDP growth for FY16 at 7.6% The Indian Meteorological Department has predicted monsoon for 2016-17 at 106 per cent of the long period average (LPA). However in the industrial sector the manufacturing sector after showing robust growth in the second quarter has slowed down consistently in the third and fourth quarter. The Index of Industrial Production (IIP) recorded a 2.4 per cent rise in 2015-16 against 2.8 per cent in 2014-15. In the fourth quarter IIP manufacturing was in a “recession” (-1.1 per cent) and the overall IIP grew by 0.2 per cent on a y-o-y basis. In the fourth quarter capital goods contracted by 15.4 per cent and consumer non-durables by 3.9 per cent on a y-o-y basis.