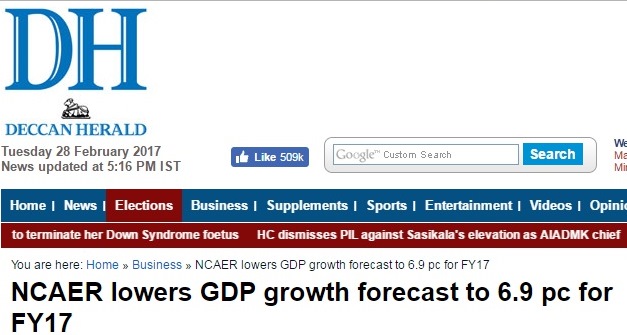 After RBI and IMF economic think­tank National Council of Applied Economic Research (NCAER) has lowered the country’s growth forecast to 6.9 per cent for the current fiscal on account of demonetisation.

A few days before demonetisation was announced NCAER had projected a growth rate of 7.6 per cent for 2016-17. “The removal of the legal tender status of high value currency notes (Rs 500 and Rs 1000) with effect from the midnight of November 8 took the domestic economy by surprise raising fresh anxieties about economic recovery leading to a downward forecast. Global economic uncertainty has added to these concerns” NCAER said in a statement today.

Earlier this week International Monetary Fund (IMF) lowered GDP growth forecast to 6.6 per cent due to the strains that have emerged in the economy as a result of “temporary disruptions” caused by demonetisation. According to NCAER the growth rate would rebound to 7.3 per cent for 2017–18.

Notwithstanding the fact that the monsoon arrived about nine days later than its normal date of arrival it said the year 2016–17 has been a good one for the agricultural sector.

NCAER estimates suggest that the total foodgrain production is going to touch a record of 272 million tonnes 8 per cent higher than the corresponding figure of 251.6 million tonnes harvested last year.

The growth of the industrial sector remained lacklustre it said adding the overall Index of Industrial Production (IIP) a measure of industrial performance in the country shows a growth of 0.3 per cent during April–December 2016–17 against 3.2 per cent growth recorded during the same period of 2015–16.

“The performance of the external sector in the third quarter of 2016–17 has shown signs of improvement. Merchandise exports grew for the fifth consecutive month in January 2017 up by 4.3 per cent” it said.

This improvement can be attributed to economic normalisation of the world economy led by revival of growth in the US the UK Germany and Japan.

Consumer price inflation trended down with inflation being at a two-year low of 3.2 per cent in January 2017.