NCAER lowers GDP forecast to 7.4 per cent for next fiscal 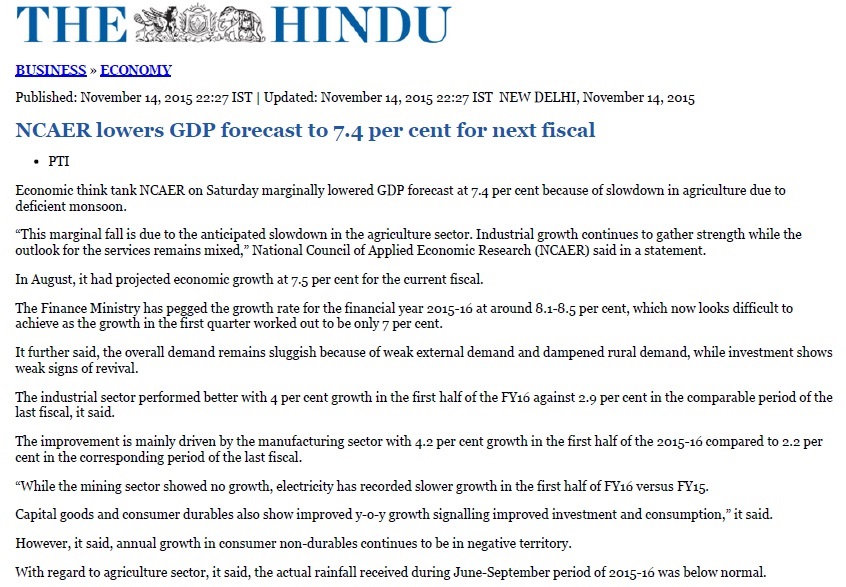 Economic think tank NCAER on Saturday marginally lowered GDP forecast at 7.4 per cent because of slowdown in agriculture due to deficient monsoon.

“This marginal fall is due to the anticipated slowdown in the agriculture sector. Industrial growth continues to gather strength while the outlook for the services remains mixed” National Council of Applied Economic Research (NCAER) said in a statement.

In August it had projected economic growth at 7.5 per cent for the current fiscal.

The Finance Ministry has pegged the growth rate for the financial year 2015-16 at around 8.1-8.5 per cent which now looks difficult to achieve as the growth in the first quarter worked out to be only 7 per cent.

The industrial sector performed better with 4 per cent growth in the first half of the FY16 against 2.9 per cent in the comparable period of the last fiscal it said.

The improvement is mainly driven by the manufacturing sector with 4.2 per cent growth in the first half of the 2015-16 compared to 2.2 per cent in the corresponding period of the last fiscal.

“While the mining sector showed no growth electricity has recorded slower growth in the first half of FY16 versus FY15.

However it said annual growth in consumer non-durables continues to be in negative territory.

With regard to agriculture sector it said the actual rainfall received during June-September period of 2015-16 was below normal.

Despite deficit rainfall it estimates overall food grain output during this year’s kharif season likely to be marginally higher compared to last year due to better rainfall conditions in areas where coarse cereals and pulses are grown it said.

On inflation NCAER said it has declined over the period of the last one and half years.