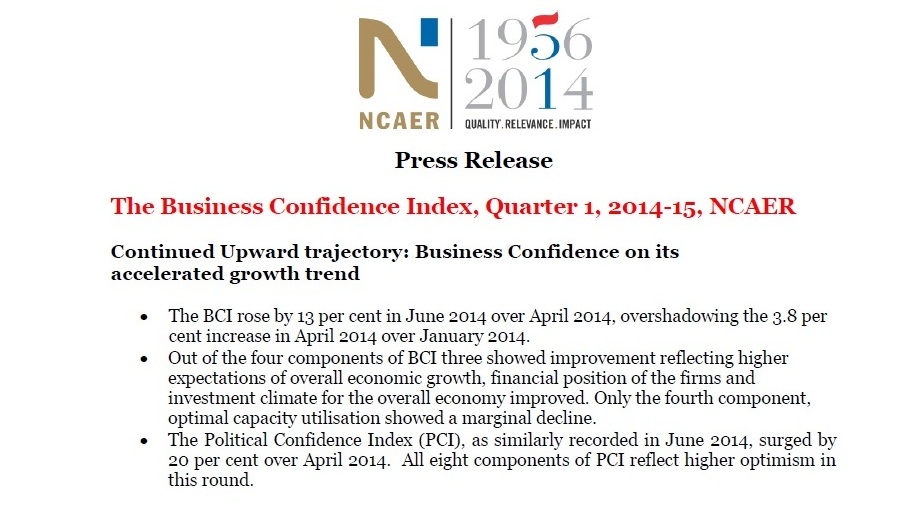 The Business Confidence Index Quarter 1 2014-15 NCAER
Continued Upward Trajectory: Business Confidence on its Accelerated Growth Trend
New Delhi Wednesday 29 August 2014: The current survey was conducted just after the formation of a new government at the Centre with a single party getting majority of its own after three decades thereby assuring citizens of stability. June was the time that the government was getting ready to present its maiden budget. Hopes and expectations from the government were high especially given its emphasis on reviving economic growth. On the economic front inflation had showed some signs of moderating and industrial production was up especially in the months of April and May 2014. Exports also showed signs of improvement. However there was still a great degree of uncertainty regarding monsoon as El Nino was predicted around that time. The Business Confidence Index (BCI) compiled by the National Council of Applied Economic Research (NCAER) provides an assessment of the sentiments of the business sector in June 2014 given this background.

The survey is based on a sample of 629 respondents.
Highlights of BES round 89

NCAER the National Council of Applied Economic Research is India’s oldest and largest independent economic think-tank set up in 1956 at the behest of Prime Minister Jawaharlal Nehru to inform policy choices for both the public and private sectors.  Over nearly six decades NCAER has served the nation well with its rich offering of applied policy research unique data sets evaluations and policy inputs to central and state governments corporate India the media and informed citizens. It is one of a few independent think-tanks world-wide that combines rigorous economic analysis and policy outreach with data collection capabilities particularly for large-scale household surveys. NCAER is currently led by its Director-General Dr Shekhar Shah and governed by an independent Governing Body chaired by Mr Nandan M. Nilekani.
Dr Bornali Bhandari