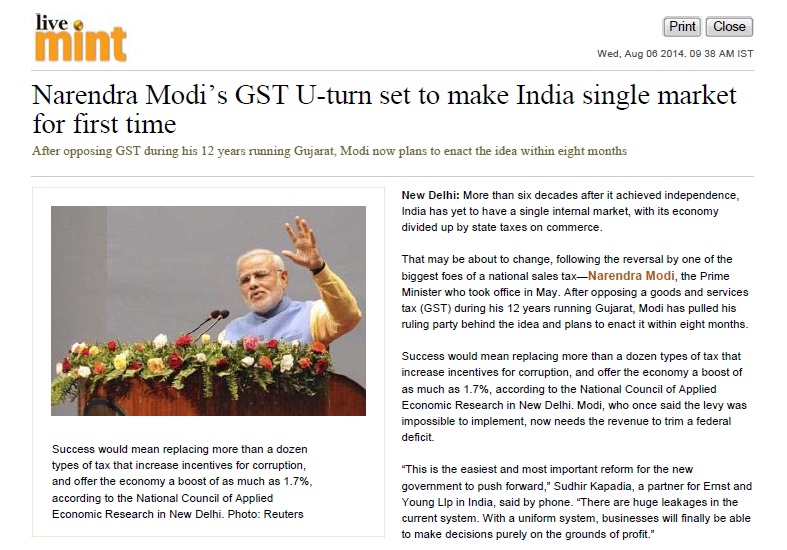 New Delhi: More than six decades after it achieved independence India has yet to have a single internal market with its economy divided up by state taxes on commerce.

That may be about to change following the reversal by one of the biggest foes of a national sales tax—Narendra Modi the Prime Minister who took office in May. After opposing a goods and services tax (GST) during his 12 years running Gujarat Modi has pulled his ruling party behind the idea and plans to enact it within eight months.

Success would mean replacing more than a dozen types of tax that increase incentives for corruption and offer the economy a boost of as much as 1.7% according to the National Council of Applied Economic Research in New Delhi. Modi who once said the levy was impossible to implement now needs the revenue to trim a federal deficit.

“This is the easiest and most important reform for the new government to push forward” Sudhir Kapadia a partner for Ernst and Young Llp in India said by phone. “There are huge leakages in the current system. With a uniform system businesses will finally be able to make decisions purely on the grounds of profit.”

Modi is under pressure to raise revenue after keeping the previous government’s fiscal deficit target of 4.1% of gross domestic product (GDP) in the year ending next March. A weak monsoon and rising oil prices threaten to inflate a subsidy bill that has risen fivefold over the past decade.

“I would not call it a flip-flop” Aman Sinha a spokesman for Modi’s Bharatiya Janata Party (BJP) said by phone of his position. “He is just executing a plan which the previous government failed to do.”

The Modi administration’s parliamentary mandate—India’s largest in 30 years—raises the likelihood of success where former Prime Minister Manmohan Singh failed. Passing the tax law would require votes in both houses of parliament plus the support of 15 of the 29 states to amend the constitution.

Amit Saigal owner of yarn-maker Eskay Yarntex Pvt. Ltd in New Delhi estimates a GST would allow him to double the company’s Rs.150 crore in annual sales within a year. He now sells to only seven states after halting shipments to Punjab because his trucks filled with spools of cotton yarn must pay two taxes to cross the border.

“Right now businesses look for ways to circumvent state taxes” Saigal 42 said by phone from Delhi. “Local politicians have made a joke of the tax system.”

Singh introduced India’s first GST Bill in 2008 and set a two-year deadline to implement it. After repeated delays Singh told reporters in 2011 that Modi’s BJP in Gujarat has taken a hostile attitude.

Modi countered that GST couldn’t be implemented without a proper computer network to support it. That’s still a concern.

The GST network has been under development since 2010 when Singh tapped Infosys Ltd’s co-founder Nandan Nilekani to lead an IT infrastructure committee. Four years later Nilekani has left and the network remains incomplete said Abdul Rahim Rather head of India’s GST committee.

“We are at it and have had so many meetings” Rather said by phone on 17 July. He didn’t offer details of the current status or say when the network would be functional.

In his budget speech Jaitley said the government will garner the two-thirds majority needed to pass the GST Bill in both houses of parliament by April. While states would get part of the revenue for the new unified levy some are reluctant to surrender their right to tax he said.

“I assure all states that government will be more than fair in dealing with them” Jaitley said.

Karnataka Tamil Nadu and Kerala—hubs for manufacturing services and technology—stand to lose the most if the government bans them from collecting local taxes without offering a substitute according to the Reserve Bank of India (RBI). Madhya Pradesh may oppose the GST if alcohol and petroleum aren’t exempted said Ashwini Kumar Rai the state’s principal secretary of commercial tax.

Most of the states have welcomed it Saurabh Patel Gujarat’s finance minister said by phone of the GST. The only thing that states were looking for was the compensation and protection plan which we are confident we will get.

While the government touts the benefits of a unified sales tax for businesses consumers may fare less well as producers and retailers of everything from basic staples to high-end handbags raise prices to cover the duty.

“I’ll have to pass the cost on to my customers who can barely spend Rs.50 a day on supplies” said Sandeep Batra 61 owner of Rex General Store in New Delhi which sells milk bread and eggs alongside Rs.2 sachets of soap.

The constitutional amendment would pass if Modi’s five BJP-led states are supported by the 11 states controlled by the opposition Congress Party which introduced Singh’s version of the GST Bill.

Constitutional hurdles mean the GST will probably be implemented some time in 2017 according to R. Muralidharan an executive director at PricewaterhouseCoopers India. Still even a watered-down GST would spur manufacturing and create jobs he said by phone from Mumbai.

“The early fears of GST are gone” Muralidharan said. “Everyone understands the positive impact it will have.” Bloomberg