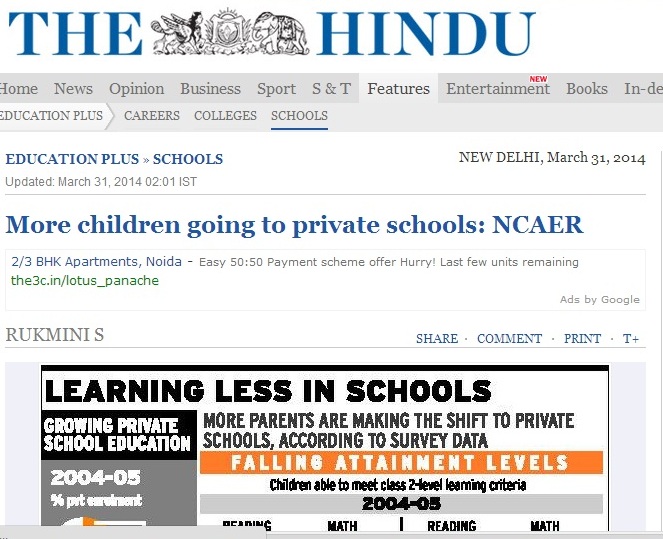 Private school enrolment continues to rise but the already low levels of what children are learning in schools — both government and private — continue to fall new data shows.

The Hindu is reporting exclusively on the findings of the 2011-12 round of India Human Development Survey (IHDS) a representative national sample of 42000 households carried out by the National Council for Applied Economic Research (NCAER).

The previous round of the IHDS was conducted in 2004-05 allowing for a comparison of change over the last eight years using independently collected data.

Private school enrolment is increasing even though it is five times as expensive as going to a government school.

The average Indian family spends over Rs. 7000 per year per child enrolled in a private school as compared to less than Rs. 1400 per child in a government school. Household expenditure on private schooling ranges from over Rs. 18000 in Delhi to just over Rs. 3500 in Uttar Pradesh.

Dropout rates highDespite the success of the United Progressive Alliance (UPA) in bringing in near-universal primary school enrolment the dropout rate remains troublingly high. About 40 per cent of teenagers above 15 years who made it to Class V said they dropped out before reaching Class IX and another 40 per cent of those who reached Class X said they dropped out within a year.

Dropout rates are slightly higher for girls and far higher in rural areas and have reduced very slightly since 2004-05. Bihar continues to have India’s highest dropout rate.

To measure how many children are learning in school the NCAER administers the test developed by NGO Pratham for its Annual Status of Education Report (ASER). The results help test the ASER findings that have been criticised by the government which says its own surveys show better results.

The NCAER researchers found that just 52 per cent children between 8 and 11 years could read at a Class II level and just 45 per cent could do a basic mathematical function subtraction. This is a small fall since 2004-05 for which the numbers were 54 per cent and 48 per cent respectively.

Children in private schools learn more than in government schools but not very much and those in cities belonging to richer households and those who come from forward castes do better. These numbers largely corroborate the ASER’s findings.