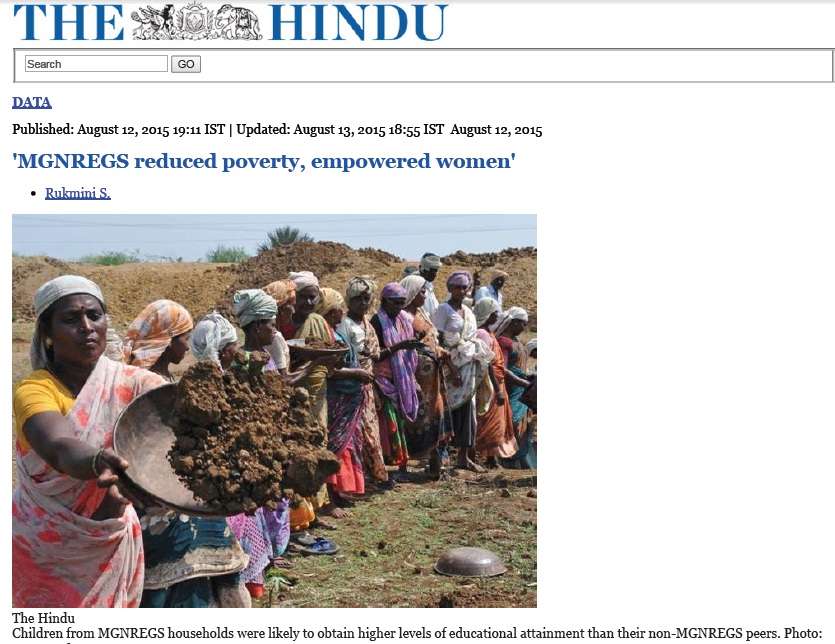 The Mahatma Gandhi National Rural Employment Guarantee Scheme (MGNREGS) reduced poverty by up to a third and gave a large number of women their first opportunity to earn cash income a new research has found.

Officials from the Ministry of Rural Development (MoRD) and the National Council of Applied Economic Research (NCAER) released a new report Wednesday evening which used data from two rounds of the India Human Development Survey (IHDS) – 2004-5 and 2011-12. The survey was conducted by the NCAER and University of Maryland involving over 26000 rural households across the country.

Comparisons between the two survey rounds found that the programme reduced poverty overall by up to 32 per cent and prevented 14 million people from falling into poverty. “Economic growth contributed to overall poverty reduction during this period but we found that the MGNREGS also played a significant role” Sonalde Desai principal author of the study said.

The numbers show that the MGNREGS is likely to have had a much smaller impact on the rural job market and on rural wages than is commonly believed. At an all-India level the average days worked under the MGNREGS is less than four pointing to the relatively small impact of the scheme to the overall rural job market. “On the surface MGNREGS has virtually no impact on rural employment patterns since it fails to add to the number of days that individuals work. But it seems to attract individuals who were previously employed in less productive work thereby raising their incomes” the report notes. Overall while the period of 2004-5 to 2011-12 saw a sharp rise in rural wages MGNREGS plays only a modest role in wage increases the report notes. The United Nations Development Programme on Wednesday also released a review of recent research studies on the MGNREGS which found similarly and found that the scheme’s uptake is far greater in the lean season that in the peak agricultural season.

The part of the rural job market that the MGNREGS did seem to have a more significant impact on was for female work. About 45% of female MGNREGS workers were either not working or worked only on a family farm in 2004–05 indicating that the MGNREGS “may well be the first opportunity many women have to earn cash income”. As a result there was a substantial increase in women’s control over resources — including cash in hand and the likelihood of having a bank account — and improvement in women’s ability to make independent decisions about their health the report found.

Children from MGNREGS households were likely to obtain higher levels of educational attainment than their non-MGNREGS peers the report found and were less likely to be working.

While financial inclusion rose in general during this period and reliance of moneylenders declined the effect was much greater for MGNREGS households as was the decrease in the overall interest paid by the household. Simultaneously accessing of formal credit grew.

What holds the MGNREGS back is “work rationing” — the inability of all interested households to get 100 days of work — as a result of mismanagement or pressures and affects the poorest the most the report finds.

“These findings clearly show that there is a large unmet demand for MGNREGS work” Jugal Kishore Mohapatra secretary Ministry of Rural Development said adding that a paucity of funds at the level of implementations and erratic fund flows particularly in 2014-15 had affected both demand and supply. “For the last four months our job has been convincing everyone that the scheme is not going away and rebooting demand” Mr. Mohapatra said.