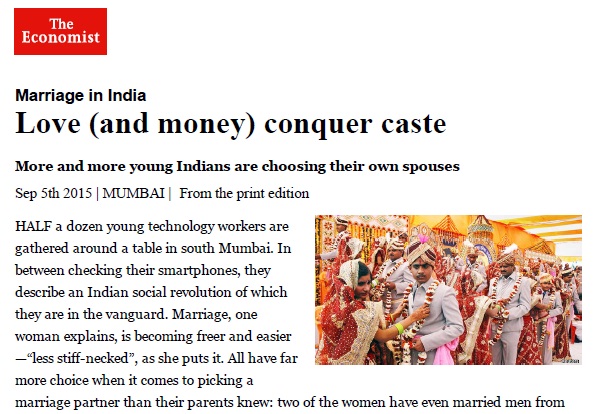 More and more young Indians are choosing their own spouses

HALF a dozen young technology workers are gathered around a table in south Mumbai. In between checking their smartphones they describe an Indian social revolution of which they are in the vanguard. Marriage one woman explains is becoming freer and easier—“less stiff-necked” as she puts it. All have far more choice when it comes to picking a marriage partner than their parents knew: two of the women have even married men from another religion. The old-fashioned marriages that they see on television and in films seem deeply peculiar. “It’s a different world” one says.

Marriage is a central institution in all societies. In India it often seems more important than anything else. Witness the extravagant days-long weddings the lavish gifts of saris and jewellery and the columns of spouse-wanted ads in newspapers—or just watch any Bollywood romantic comedy. Yet marriage in India is also changing in ways that are liberating and exciting but also often confusing.

Nearly all Indian women marry by their late 20s and births out of wedlock are vanishingly rare. Marriages are almost always arranged. Dowry payments are widespread. About 90-95% of the time Hindus marry within their broad caste group. But if the basic rules of the game are fixed the style of play is different these days.

Gourav Rakshit the chief executive of a popular website for seeking marriage partners Shaadi.com spies a subtle but momentous change. It used to be that parents and older siblings drove the matchmaking process he says lining up potential partners whom the spouse-to-be might veto. These days the offspring tend to be in charge of finding their own partners but parents may veto them. “What has not changed is that marriage is a family decision” he explains. “What has changed is who is driving the process.”

Fully 73% of the profiles on Shaadi.com have been put there by people who are seeking partners for themselves not by their parents or brothers. These days most new users (about 12000 to 15000 people sign up each day) access the website via smartphones. Those phones which are bringing the internet to millions of new users are themselves changing the matchmaking process. Tech-savvy Indians can now find out all about potential partners by tracking their digital traces through social media or just by texting and telephoning. Parents need never know.

If small numbers of highly educated urbanites were becoming more individualistic it would be little more than an interesting wrinkle in Indian life. However the change is much more widespread than that. To begin with this group is no longer small. Fully a quarter of young Indians were in tertiary education in 2013 according to the World Bank up from 11% a decade earlier. Education and control over marriage go together (see chart).

And it is not just the wealthy who see marriage differently. The teenagers who live in Dharavi a long-established slum between two railway lines in Mumbai feel themselves to be just as culturally distinct from rural Indians as the technology workers do. Young men from Dharavi sometimes marry village women who come to live with them. Asked about this one teenage slum girl launches into a wicked impersonation of a rural bride all namastes and scraping deference to her husband. (A Muslim boy is more equivocal: Mumbai girls know how to handle technology he says but rural girls know how to handle mothers-in-law.)

Although caste is still powerful in Dharavi it is gradually giving way to the money god. Teenage boys insist that good jobs—government jobs especially—are now more important both for snagging good partners and for asserting control over marriage decisions. One of the boys an orphan has a girlfriend and wants to marry her. Her parents object to his caste but he reckons he can wear down their objections by finishing his education and getting a better job.

Dipankar Gupta a sociologist at Shiv Nadar University says that caste is crumbling as India urbanises. Nearly a third of Indians now live in cities or towns while villages are tied increasingly to urban economies. The village bosses who enforce caste rules have less power than they did. Some north Indian village elders have chosen to relax the rules anyway because so many single men are in search of wives—a consequence of sex-selective abortions. Caste is now less an institution than a mess of prejudices about the superiority of one’s own group.

Popular culture is driving change too. In parts of Dharavi the greatest hazard for a pedestrian is not the open sewer beneath your feet but the tangle of wires around your head. Many of these wires carry cable-television signals. They transmit soap operas and movies which often depict the struggle between love and tradition. Though these seem stuffy to the upper middle classes they can be a revelation to the poor. Nayreen Daruwalla of SNEHA a Mumbai charity has heard women complain that their husbands do not sing to them as men do in Bollywood films.

One big thing stands in the way of further change says Sonal Desai another academic. Indian parents still assume they will live with their sons. That explains why they exert so much control over marriage: they are in effect choosing a cook and a future carer. Yet this too is beginning to weaken. Ms Desai conducted a huge survey of Indians in 2011-12 which found that 77% of women over 60 lived with their married children—still a big proportion but lower than the 83% who did so in 2004-05. Small houses and high-rise flats are shooting up in Indian suburbs suggesting the share is going to fall further.

Indian marriage still looks very different from the Western kind (which is changing too). Yet prosperity and technology are eroding tradition. People Group which owns Shaadi.com even invested in a dating app earlier this year. Such apps which were unimaginable in India until recently have not taken off yet. “The guys are all keen” says Mr Rakshit “but the girls aren’t there yet.”

Dr Sonalde Desai quoted in this article is a Senior Fellow at NCAER.

Indian Human Development Survey (IHDS) is a collaborative research programme between researchers from NCAER and the University of Maryland.
Published in: The Economist, September 5, 2015
Download