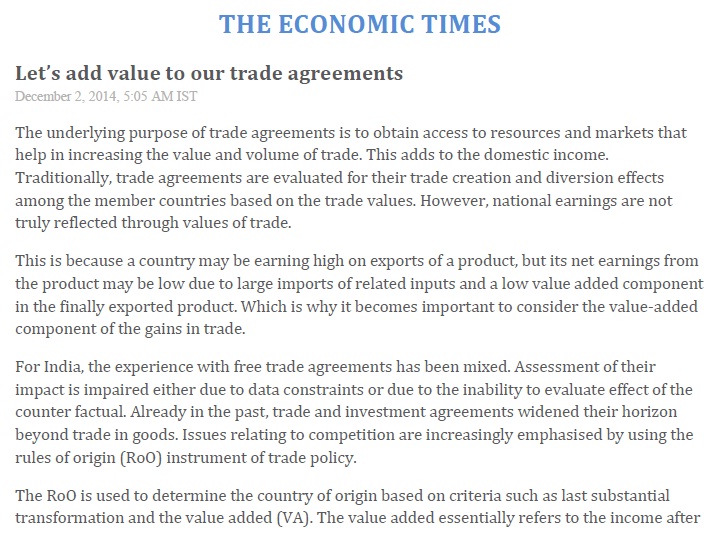 The underlying purpose of trade agreements is to obtain access to resources and markets that help in increasing the value and volume of trade. This adds to the domestic income. Traditionally trade agreements are evaluated for their trade creation and diversion effects among the member countries based on the trade values. However national earnings are not truly reflected through values of trade.

This is because a country may be earning high on exports of a product but its net earnings from the product may be low due to large imports of related inputs and a low value added component in the finally exported product. Which is why it becomes important to consider the value-added component of the gains in trade.

For India the experience with free trade agreements has been mixed. Assessment of their impact is impaired either due to data constraints or due to the inability to evaluate effect of the counter factual. Already in the past trade and investment agreements widened their horizon beyond trade in goods. Issues relating to competition are increasingly emphasised by using the rules of origin (RoO) instrument of trade policy.
The RoO is used to determine the country of origin based on criteria such as last substantial transformation and the value added (VA). The value added essentially refers to the income after reducing the cost of inputs from the value of output. The RoO is required to handle issues related to anti-dumping completion and quotas besides the data necessary to compile trade statistics.
Importance of the RoO has increased as global supply chains are increasingly spliced and a specific product can travel transit and transform substantially before reaching the point of ultimate consumption. For instance the automobile supply chain consists of design raw material (steel glass) components (tyres air bags and windshields) assembly marketing and distribution. Each of these has various levels of value added and can be dispersed across countries. And yet trade agreements do not consider these consequences while assessing the prospects. This despite the RoO concept being in place for a while now.
The value-addition structure of Indian exports is aligned with the world exports with 24% of the value due to foreign inputs and 76% due to domestic production. Further 42% of the domestic value added is consumed at the first export destination while another 34% is consumed at the second destination.
By comparison for China foreign inputs account for 33% of total exports. Of the 67% domestically-produced component only 25% is consumed at the immediate export destination while 41% is consumed after the first transit. This underscores China’s presence in processing and assembly trade. So a country’s export competitiveness could be on the comparative strength of its intermediate imports and the net national earnings may not be as large despite high value of exports. Under such circumstances exports tend to misrepresent the net gains and incomes.
Expanding global supply chains increasingly challenge the traditional income measures based on export values. The value-added assessment of trade potential is imperative if India plans to effectively generate income through trade expansion by engagement in trade agreements.
Published in: The Economic Times, December 2, 2014
Download