Kerala state development might soon have to deal with Dutch Disease 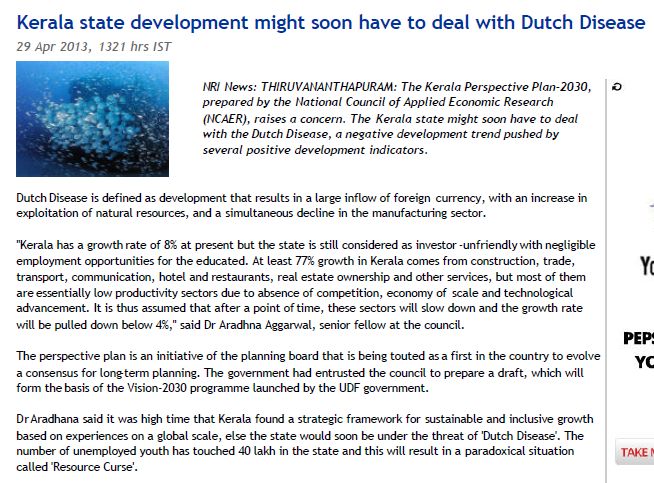 THIRUVANANTHAPURAM: The Kerala Perspective Plan-2030 prepared by the National Council of Applied Economic Research (NCAER) raises a concern. The Kerala state might soon have to deal with the Dutch Disease a negative development trend pushed by several positive development indicators.

Dutch Disease is defined as development that results in a large inflow of foreign currency with an increase in exploitation of natural resources and a simultaneous decline in the manufacturing sector.

“Kerala has a growthrate of 8% at present but the state is still considered as investor-unfriendlywith negligible employment opportunities for the educated. At least 77% growth in Kerala comes from construction trade transport communication hotel and restaurants real estate ownership and other services but most of them are essentially low productivity sectors due to absence of competition economy of scale and technological advancement. It is thus assumed that after a point oftime these sectors will slow down and the growth rate will be pulled down below 4%” said Dr Aradhna Aggarwal senior fellow at the council.

The perspective plan is an initiative of the planning board that is being touted asa first in the country to evolve a consensus for long-term planning. The government had entrusted the council to prepare a draft which will form thebasis of the Vision-2030 programme launched by the UDF government.

DrAradhana said it was high time that Kerala found a strategic framework for sustainable and inclusive growth based on experiences on a global scale else the state would soon be under the threat of ‘Dutch Disease’. The number of unemployed youth has touched 40 lakh in the state and this will result in a paradoxical situation called ‘Resource Curse’.

The draft Kerala PerspectivePlan 2030 says the stateâ€™s current rate of high economic growth in the range of about 10 percent cannot be sustained if it continues to depend solely onremittances from abroad and tourism.

The Perspective Plan which seeks to transform Kerala into a high income state by 2030 wants the state to opt for a course correction and adopt health and education as the new engines of growth.The draft said that the state had crossed the threshold of a lower middleclass income economy. So the livelihood approach should (now) be replaced by anentrepreneurial approach.

Prepared by the New Delhi-based think tank National Council of Applied Economic Research the plan was presented to MLAs at the Old Assembly hall here on Wednesday.

It says the main forces of consumption-driven Kerala’s growth are: remittances tourism and constructionactivities which are highly vulnerable to internal and external factors.

If these growth drivers slow down the state’s economic growth couldslow down to below 4 percent in the next 10 years. The social gains achieved by the state in the health and education sectors it noted have not translated into an economic growth for the state.

In this context the plan calls for transformation of the social sectors into productive sectors. For this the state should do global marketing of its social gains and create education and health hubs in each district.