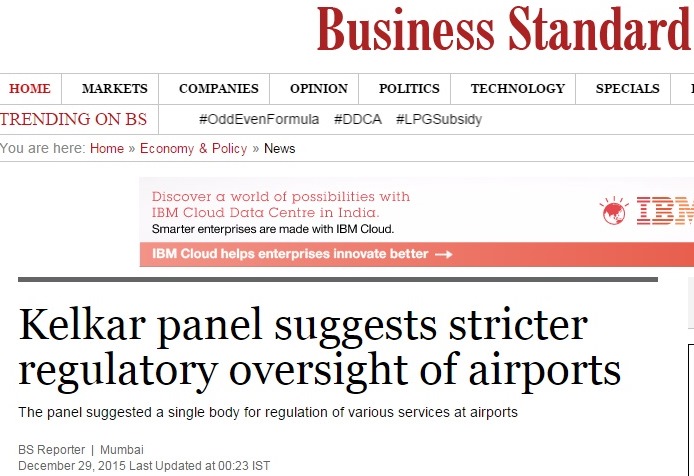 The Vijay Kelkar Committee has recommended stricter regulatory oversight of airports and cooperation amongst customs immigration and other government agencies with a view to improving service delivery.

Airports at Mumbai Delhi Bengaluru and Hyderabad have been developed under the public-private partnership (PPP) route. In its draft civil aviation policy too the government had said it would encourage further development of airports through the PPP mode.

However the development has led to an increase in user charges for airlines and passengers and there has been a call for stricter regulation.

The Kelkar Committee has said regulatory supervision of all airports should be strengthened. It has suggested a single body for regulation of various services at airports.

It has said government agencies such as the Bureau of Immigration Customs and the security services must work together. “A provision may be made to ensure all agencies work towards a unified objective of service delivery” it said.

In what will cheer project developers the committee has said airport concession agreement could be drafted to include commercial parameters related to the airport such as return on equity treatment of land for non airport activities etc. These would help in reducing regulatory uncertainties and disputes in tariff calculation.

Currently airports and airlines are litigating against tariff orders passed by the Airports Economic Regulatory Authority over the methodology and approved charges. For example there are differences on how to treat deposits earned from leasing airport land while calculating tariff. While the airports feel this should be included toward project equity the same has been disallowed by the regulator. Also the airports are demanding a higher return on equity than the one allowed by the regulator.

The panel has said the PPP framework should be selectively utilised in airport development.