Keep calm and carry on MGNREGA 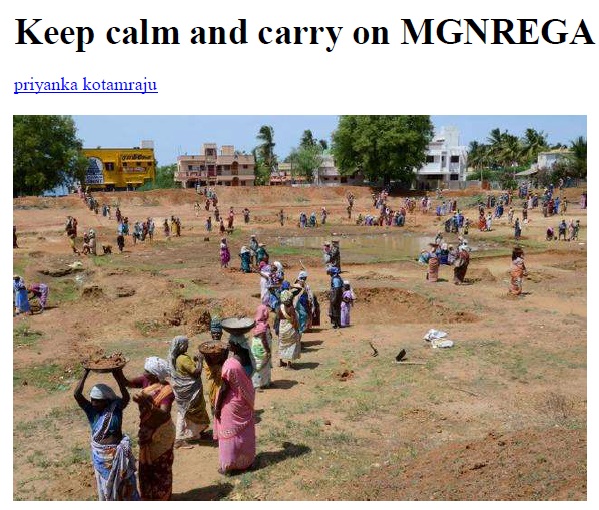 Despite severe criticism — Prime Minister Narendra Modi called it a “living monument of your [the Congress] failure to tackle poverty in 60 years” — the Act first rolled out in 2004-05 has provided employment to more than 27 crore people in 2.5 lakh gram panchayats in 658 districts. Earlier this month two reports on the programme were released. One was an anthology of research called Sameeksha put together by the UNDP; and the other was a survey — titled ‘MGNREGA: A Catalyst for Rural Transformation’ — led by the Indian Human Development Survey (IHDS) National Council for Applied Economic Research (NCAER) and University of Maryland.

A Catalyst… is a unique study because it was first held across 26000 rural households in 1503 villages and 971 urban blocks in 2004-05 when the Act was not implemented and then again in 2011-12 with a 90 per cent “recontact rate”. This exercise took 15 months for data collection an army of 450 interviewers and 50 researchers and nearly 12000 phone calls. “If you’re ever going to look at the effect of a programme or programme participation you’d want a ‘before’ and ‘after’ picture on the same households as far as possible” says the principal author of the study Sonalde Desai.

BLink met with the IHDS survey authors Sonalde Desai Prem Vashishtha and Omkar Joshi to discuss where the scheme has worked and where it hasn’t. Excerpts from the interview:

More than half of the total rural households don’t even seek job cards. Participation numbers are also declining. Why?

Sonalde Desai (SD): We are talking of two things here. One is that you are not in the income category where you want to do manual labour like the households of schoolteachers. Or take Punjab where daily wages are anywhere between â‚¹250 and â‚¹400 people decided to not work in MGNREGA which is fine. So here things are available but the person is not interested. We are happy about that. It’s not a cause for worry. The second is where they could actually be helped by it either they don’t see much work happening or they are not aware. They don’t realise it’s their right to get work which is a problem of awareness.

I think some of the decline was just due to the central government. Rajasthan which is the poster child really shrunk down the work they were doing. Political whims do influence how much emphasis MGNREGA gets.

Omkar Joshi (OJ): But participation rates for women SCs/STs are rising. The administration itself has gone on record and stated that the perception last year was that this [scheme] will be scrapped that the ministry is not serious about it. The scheme may be working on the ground but it’s the uncertainty that affects work allocation. The ministry admitted last year that there was a sharp drop in the works allotted and number of days. But that is no longer there MGNREGA is here to stay.

Sixty per cent of the participating rural households want to work more but are unable to find work. There are gaps in wage payments and unemployment allowances. What are the gaps in work rationing?

SD: There are many ways in which work-rationing gaps arise. For example in order to get work you have to go to the gram sabha to express interest. Gram sabhas may be held only twice a year. Somewhere along the line you’re not able to register your interest. Then even if people have registered the gram panchayat has to prepare a work plan and send it to the block. It takes a long time. One of the things that Jugal Kishore Mohapatra Secretary in the Ministry of Rural Development said is that at some level you don’t always have the money when the work is needed. So money may be there for the whole year but it is not quite available when you need it.

OJ: That was one of the stories we found. For a statutory wage of X workers are getting less than that in reality. The money should be available to the gram panchayat if not then he [the pradhan] tries to arrange the money through informal sources of credit like moneylenders. He charges interest on that and passes it to workers. So the issues of timing and liquidity are very crucial for wage payments and unemployment allowances. Currently just four per cent people get unemployment allowances.

One of the major findings of the survey was that poverty has declined by about 32 per cent since MGNREGA was implemented that is an estimated 14 million people didn’t fall into poverty. How effective has the scheme been?

Prem Vashishtha (PV): We have been able to identify those households which have participated in MGNREGA so the 14 million people figure is from that. If you take away their MGNREGA income they would go below the poverty line. It is in this sense that we are saying that the scheme could prevent them from falling into poverty.

SD: Participant households would have been poorer by 25-32 per cent depending on the method if MGNREGA was not there. We have used two different assumptions. The first is when we assume that MGNREGA workers are drawn from a cadre of under-employed people. So MGNREGA work is not replacing something else it is adding income. A certain percentage of it would be devoted to consumption; the poorest would use 90 per cent. We subtract that expenditure from what they are actually making and say that their expenditure has increased. That difference gives us about 32 per cent reduction in poverty rate.

The report also talks about poverty and vulnerability. What is the difference and why is vulnerability a better measure?

SD: Vulnerability is very interesting. The country started out [post Independence] with a 50 per cent poverty rate which has gone down to 21 per cent. So there’s been an overall decline. When poverty rates were high you were born in circumstances that kept you poor. As poverty falls factors of birth become less important and factors of life — drought illness widowhood — become more important.

And what you have to recognise is that these are people who have a potential vulnerability to fall into poverty. Right now it’s fine they have been pushed up the poverty line because of growth but they are only one illness away from falling back into poverty. That becomes very difficult to identify a priori. You can’t give people a BPL card three years in advance.

Poverty is no longer a static factor. Forty per cent of the households that currently work in MGNREGA were not poor in our survey seven years ago. We called them transient poor. If we think of poverty as a dynamic phenomenon then our safety net programmes can’t rely on our ability to identify the poor. MGNREGA is a scheme that is not targeted at people holding a BPL card but rather at people who are potentially poor.

According to the survey wages have improved so has financial inclusion. Formal credit is also on the rise. However these indicators have improved for non-MGNREGA households as well. To what extent is MGNREGA responsible?

SD: There is a general improvement as far as financial inclusion is concerned. What MGNREGA seems to have done is hastened it for participants. It led to bank accounts so individuals don’t have to rely on moneylenders. Overall improvement is happening. That is why we have carefully called it a ‘catalyst’.

One of the success stories of MGNREGA has been the participation of women. How much credit does the scheme deserve for this?

SD: Here I would give MGNREGA a causal role. Forty five per cent of participating women were not in wage employment in the previous round 24 per cent worked on their farms 21 per cent were not working at all. For these women MGNREGA might very well be the first cash income opportunity.

In 2004-05 only nine per cent women had bank accounts now 49 per cent have them 93 per cent women now seek health services. Despite increase in participation the report says that women still barely make one out of four decisions that indicate empowerment — whether to buy an expensive item how many children to have what to do when children fall ill and whom the child should marry.

SD: Are we saying that Indian rural women have become super-empowered? No. Actually in a sea of disempowerment these are marginal improvements. But in the feminist advocacy for equal wages this is one example where it just happened!

Looking at administrative data there is an exogenous change in wages and employment impact. The question now is if the employment has any other positive impact on their households. We see some indications of it but as sceptical empiricists we will have to wait and see.

The survey reports improvement in children’s education. On the other hand ASER has reported a decline in learning levels over the last decade…

SD: Enrolment has been rising across the country but it is also bringing in a lot of first-generation learners. This has had an impact on ASER’s report. We see reading and writing skills declining marginally.

That is the big story with which we have no complaints. However we were surprised to see kids from MGNREGA households were doing better. With first-generation learners learning levels ought to drop even for MGNREGA kids. But this is where we see a slight improvement.

At first we thought it might be because the parents now have money they are able to give their kids books tuitions. The route for improvements we thought was higher expenditure. But we don’t see that. MGNREGA families are spending more on their children but non-MGNREGA families are spending even more. What is really happening is that MGNREGA children are spending more time in school-related activities — more hours in school on homework. Part of it is declining child labour [marginal improvement] but part of it is because households are now able to substitute certain services which children were forced to provide with the MGNREGA income. So now you can buy fuel wood rather than get children to gather it.