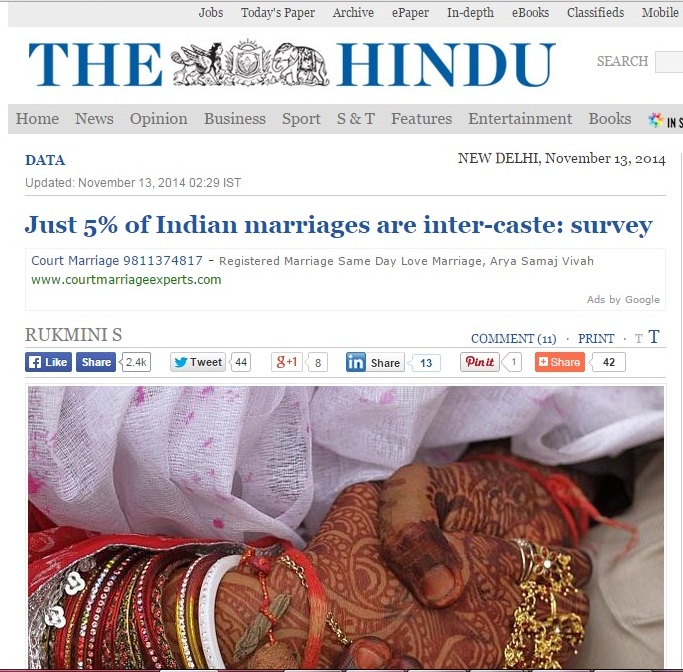 Just five per cent of Indians said they had married a person from a different caste says the first direct estimate of inter-caste marriages in India.

The India Human Development Survey (IHDS) conducted by the National Council for Applied Economic Research (NCAER) and the University of Maryland also reported that 30 per cent of rural and 20 per cent of urban households said they practised untouchability. The IHDS is the largest non-government pan-Indian household survey. It covers over 42000 households representative by class and social group. Its findings yet to be made public were shared exclusively with The Hindu. When married women aged between 15 and 49 were asked if theirs was an inter-caste marriage just 5.4 per cent said yes the proportion being marginally higher for urban over rural India.

There was no change in this proportion from the previous round of the IHDS (2004-05). Inter-caste marriages were rarest in Madhya Pradesh (under 1 per cent) and most common in Gujarat and Bihar (over 11 per cent).

The India Human Development Survey said what female respondents interpreted as a “different caste” is likely to have been subjective but ultimately closer to the lived reality of an inter-caste marriage.

“Questions on caste are some of the most complex questions Indian surveys can ask. The same person will say ‘I am Baniya’ today and say ‘I am Modh Banik’ tomorrow; both would be correct” Sonalde Desai a demographer who is Senior Fellow at NCAER and Professor of Sociology at the University of Maryland who led the IHDS-II told The Hindu.

“So the IHDS took a simple approach and asked women whether their natal family belongs to the same caste as their husband’s family allowing us to bypass the complex issue of defining what caste means and get subjective percept-ions from our respondents” Dr. Desai said.

The NCAER survey also asked respondents if they practised untouchability following it up with a question on whether the respondent would allow a lower caste person to enter their kitchen or use their utensils.

A third of rural respondents and a fifth of urban respondents admitted to practising untouchability. The practice was most common among Brahmins (62 per cent in rural India 39 per cent in urban) followed by Other Backward Classes (OBCs) and then non-Brahmin forward castes.

The only other estimate on the extent of inter-caste marriage came from an indirect method. Comparing the answers that the husbands and wives of the same household gave to the National Family Health Survey researchers Kumudini Das K.C. Das T.K. Roy and P.K. Tripathy found that 11 per cent of couples in the 2005-06 NFHS stated different caste groups.