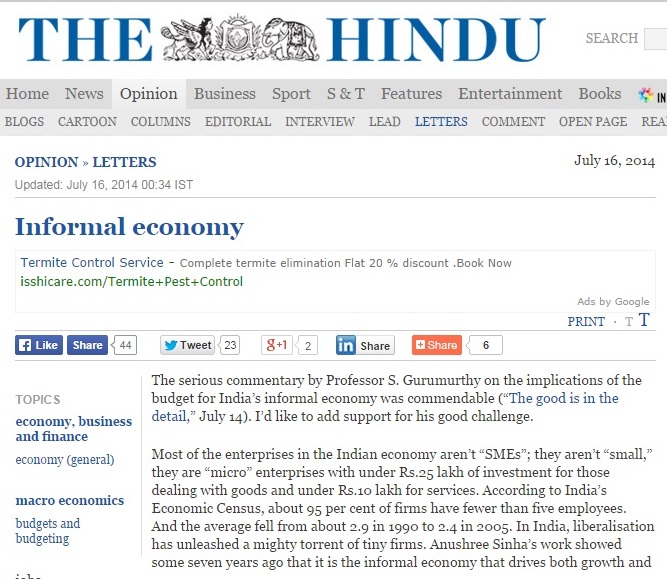 The serious commentary by Professor S. Gurumurthy on the implications of the budget for India’s informal economy was commendable (“The good is in the detail” July 14). I’d like to add support for his good challenge.

Most of the enterprises in the Indian economy aren’t “SMEs”; they aren’t “small” they are “micro” enterprises with under Rs.25 lakh of investment for those dealing with goods and under Rs.10 lakh for services. According to India’s Economic Census about 95 per cent of firms have fewer than five employees. And the average fell from about 2.9 in 1990 to 2.4 in 2005. In India liberalisation has unleashed a mighty torrent of tiny firms. Anushree Sinha’s work showed some seven years ago that it is the informal economy that drives both growth and jobs.

Very few of these tiny firms grow from rags to riches — we read about the exceptions. The vast majority are unable to save or to grow by reinvesting: the economy expands through the multiplication of these tiny units. They don’t accumulate because of adverse terms and conditions in the marketplace. It isn’t just a matter of prices they often face delays in payment for their output while being required to pay promptly for inputs. Some — it isn’t known what proportion — are not really independent units at all but are called “disguised wage-workers.” Others don’t maximise profit they toil to maximise production on what funds they have.
For sure credit is important — the NCEUS stressed this way back in 2007 and the Reserve Bank says that as of today micro and small industries can get loans up to Rs.5 crore. But without collateral and legal registration you won’t be eligible. You are left with the problems of either the savings groups or of being on the end of onward lending at ever higher interest by webs of credit spun by collateralised businesses with access to multiple bank accounts.

Over and above credit tiny businesses need safe sites and infrastructure: not just roads transport and communications but reliable power water drainage and sewerage. That means attending to local municipal governments their revenues and their politics.

It is also known that “informal” unregistered unregulated activity has become complex. A typical firm will be registered with a municipality but will flout labour and environmental laws and pay tax with great reluctance and as late as possible in the tax-year. The informal economy isn’t confined to small enterprise: big corporations and government departments are not above employing labour on verbal contracts and illegal terms and conditions.

Returning to small self-employed firms over and above the economic and infrastructural support they need it’s important to understand that economic agents are not free to invest wherever they might like — there are powerful social obstacles. Although the founding fathers reckoned that the animal spirits of markets or the rationalities of planning would dissolve archaic forms of exchange this hasn’t happened. Something more complicated is developing in India’s informal economy. For sure markets are opening up opportunities to some people but at the same time and sometimes in the same place they also discriminate against others and prevent entry.

There is overwhelming evidence from rural and small-town India that it isn’t just caste that structures the informal economy as Prof. Gurumurthy has shown. It is also gender ethnicity religion and language that persist in shaping the opportunities that are available. And thousands of small business associations keep tight order in the so-called unorganised sector. Any interventions in this day and age will have to negotiate with what is on the ground. I wish the Finance Ministry good luck in sorting this out in the three months they have given themselves in Paragraph 102 of the Budget. Some of us have struggled through our working lives to understand it!