India's Modi appeals for calm after night of rioting: 'Violence will not benefit anyone' 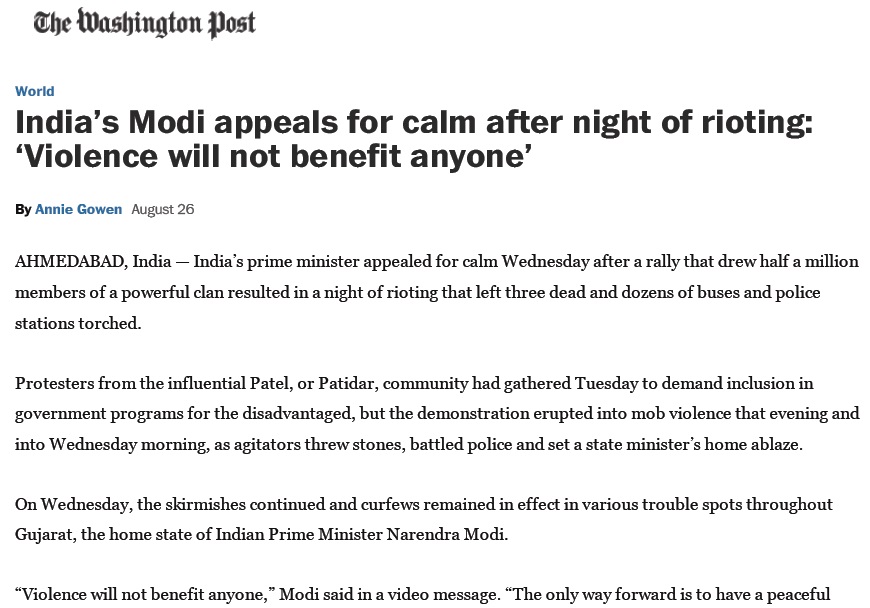 AHMEDABAD India — India’s prime minister appealed for calm Wednesday after a rally that drew half a million members of a powerful clan resulted in a night of rioting that left three dead and dozens of buses and police stations torched.

Protesters from the influential Patel or Patidar community had gathered Tuesday to demand inclusion in government programs for the disadvantaged but the demonstration erupted into mob violence that evening and into Wednesday morning as agitators threw stones battled police and set a state minister’s home ablaze.

On Wednesday the skirmishes continued and curfews remained in effect in various trouble spots throughout Gujarat the home state of Indian Prime Minister Narendra Modi.

“Violence will not benefit anyone” Modi said in a video message. “The only way forward is to have a peaceful dialogue.”

“Our movement is nonviolent” Patel told the television channel NDTV on Wednesday. “We have not triggered any violence.” He promised that his campaign would “intensify” in the coming days.

Members of his clan historically have been politically powerful landowners businessmen and diamond polishers in India and they been a driving force in the country’s diaspora. More than 40 percent of motels in the United States are owned by Indians for example many with the last name Patel.

But long-held resentment of what the Patels see as the government’s preferential treatment of the underprivileged twinned with economic woes came to a boil this summer in a series of rallies and protests.

“We are angry. We are frustrated. We want the system changed” said Ankit Patel 25 who said he was passed over for admission to a master’s program at a state university in favor of three classmates from tribal communities who had lower marks.

Hardik Patel rocketed to prominence in recent weeks when he appeared at dozens of rallies throughout the state asking that Patels be included in a system — known as reservation — that provides quotas for seats in state universities and for government jobs. The baby-faced activist has been hailed as a hero by his followers who have spread photos of him posing with guns on social media.

“He has shaken Gujarat in the last 50 days” said Manoj Patel 29 the owner of a textile-export firm who attended Tuesday’s rally.

At the rally hundreds of thousands gathered in an exhibition ground at a university in the state’s commercial capital to cheer as Hardik Patel stood in the heat and spoke before long rows of mostly young men in white Gandhi caps. Patel vowed that they would “snatch” their protections from the government if they had to called for a general strike and said he would stay at the venue on a hunger strike until his concerns were heard.

Since its independence from Britain in 1947 India has sought to protect its Dalit and tribal communities by reserving special seats in universities as well as some government jobs.

Those set-asides were later expanded to include some socially disadvantaged castes a designation called “Other Backward Classes” according to Sonalde Desai an expert on caste and a professor of sociology at the University of Maryland. Modi who rose from humble origins as the son of a tea seller to become prime minister is from a caste that falls into this category.

In contrast the Patel clan counts among its ranks numerous politicians including Vallabhbhai Patel one of the revered founders of the country. On Tuesday his image was everywhere — on masks on T-shirts — in Gujarat.

Such a background will make the Patel demand for inclusion into the OBC category a difficult sell analysts say although some Patels argue that the caste-based system should be scrapped altogether in favor of distribution of government assistance by economic need. Gujarat’s chief minister Anandiben Patel has said that expanding the state’s existing quota system would violate a Supreme Court ruling on the matter.

“These are very very politically powerful extremely well-off people” said newspaper columnist Aakar Patel whose family lives in the Gujarati city of Surat India’s diamond-polishing center. “It is incredible to me that they should even be making this demand.”

Some analysts wonder how Hardik Patel’s Patidar Anamat Andolan Samiti movement coalesced so rapidly this summer. Social scientist and author Achyut Yagnik suggested that many of the state’s youths have a “sense of deprivation” and feel left out of progress in Gujarat the home state of Modi who rode to national victory last year showcasing his state’s economic success.

“He hasn’t done anything for us. We start sweating at the mention of his name” said one protester Keyur Patel 25. In the past the Patels have been strong supporters of Modi and his political party.

Gujarat like the rest of India has high numbers of unemployed young workers. The state government said in November that 900000 “educated but unemployed youths” including 30000 with postgraduate degrees had registered with various state employment exchanges between 2011 and 2014.

Yet many at the rally on Tuesday voiced typical middle-class concerns over salaries the cost of student tuition and the desire for better more stable jobs.

“We need a reservation for university admissions” said Kalavatiben Patel 43 a homemaker in Ahmedabad. “Our children get good marks good percentages and they don’t get admissions. It would be a level playing field.”

She said her daughter Shraddha 25 was not accepted into a government college so the family paid for her to go to a private university. She’s now attending Northeastern University in Boston on a scholarship.

But Pradeep Patel 56 a farmer social worker and organizer said it was a mistake to think of all Patels as affluent and not in need of government help.

“Many of us have had to sell land in distress and open grocery stores and paan [betel leaf and tobacco] shops” he said. “Not everyone is a businessman. That is just a myth. There is a Gujarati saying ‘All Patels are happy.’ That’s just a saying. It’s not the truth.”

Dr Sonalde Desai quoted in this article is a Senior Fellow at NCAER.