Indian economy likely to grow at 7.4 pc in FY16: NCAER 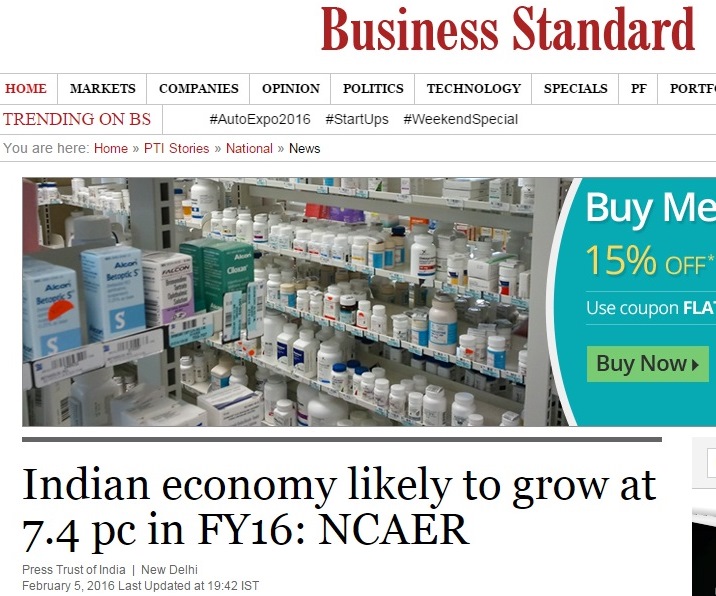 Indian Economy is expected to grow at 7.4 per cent in the current fiscal despite weak performance of agriculture sector due to poor monsoon NCAER said.

According to the National Council of Applied Economic Research (NCAER) report prospects for agriculture sector in 2015-16 remain weak owing to poor monsoon rainfall for the second year in a row.

However rabi output may be comparable to the previous year and the overall foodgrain output for this year may be marginally higher by approximately 1-2 per cent it said.

With regard to factory output it said the Index of Industrial Production (IIP) contracted sharply in November 2015 with the index declining 3.2 per cent down from a five-year high of 9.8 per cent in October 2015 and a growth of 3.8 per cent in the comparable period last year.

Manufacturing sector accounting for 75 per cent of the total industry was the biggest contributor to the fall in industrial growth with manufacturing IIP witnessing a steep fall of (-) 4.4 per cent in November 2015.

Nonetheless the cumulative industrial growth during April-November period in fiscal year 2015-16 stood at a decent 3.8 per cent comfortably outpacing the growth seen during the same period for the last three years it said.

As far as services sector is concerned the report said leading indicators present mixed signals in the first three quarters of current fiscal.

The growth of banking indicators have been mixed with lower growth in aggregate deposits and higher growth in bank credit to the commercial sector.