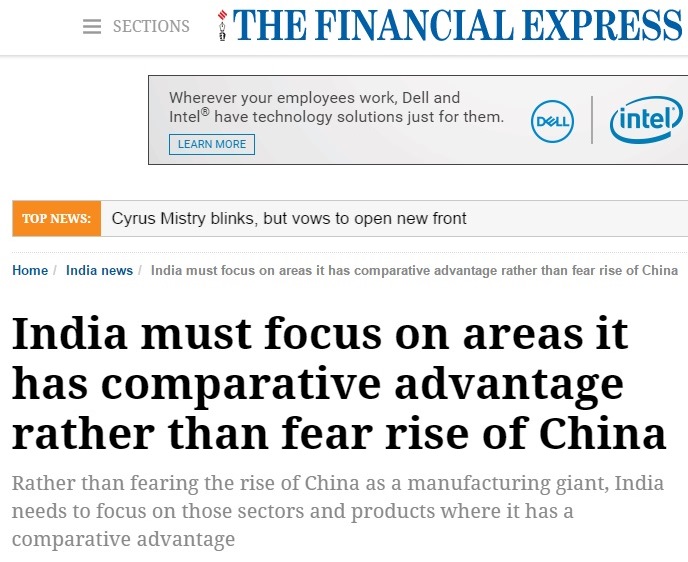 Ironically this sharp divergence in their respective export performance has come despite the fact that while India was a founding member of WTO in 1995 China became a member only in 2001. Theory tells us that trade competitiveness in world markets is a function of comparative advantage; hence this wide divergence in export performance is a bit puzzling. True China’s economy is more than five times larger than Inve a little deeper? After all India has some of the world’s largest reserves of iron ore bauxite and manganese.
dia’s and its manufacturing sector is ten times India’s but do these factors alone explain China’s success in exports? Or does one need to del

China’s growing comparative advantage in export of manufacturing products is well-documented. But what is less well-known is that in many other commodities such as food items agricultural raw materials fuels and ores metals and precious stone India has comparative advantage in the world market. Consequently even as India and China compete fiercely in world markets our export baskets are complementary rather than competitive.

So rather than fear the rise of China as a manufacturing giant India needs to focus on those sectors and products where it has a comparativ
advantage vis-a-vis China. The key therefore is to identify these sectors properly.

Thus when it comes to commodities like food agricultural raw materials ores metals precious stones and fuels Indian exports enjoy a distinct advantage vis-à-vis China. It is only in respect of manufactured goods that China has an edge over India. While this is perhaps only to be expected and gels with the widely-accepted view that China is a far more industrially advanced country compared to India what it suggests is that India could beneficially focus.

The analysis reveals that India has a significant comparative advantage over China as the RCA indexes are well above one in the case of ‘all food items’ in all the years under consideration. In 1990 the RCA index for China was 1.37; however it declined to 0.34 in 2014; likewise the RCA index for India too declined but from 1.67 in 1990 to 1.43 in 2014.

The RCA index for India in the case of ‘Ores Metals and precious stones’ is well above 1 in all the years under the study period. India performed much better during the period 2005-2010. China’s RCA index was 0.58 in 1990 and declined to 0.22 in 2014. The RCA index for India is considerably higher than unity indicating that this is a competitive export item for India in the world market. This is not surprising as India has world’s largest reserves of iron ore bauxite etc.

Thus even as India and China compete fiercely for global markets by focusing on the sectors/products where each one has comparative advantage both countries could simultaneously grow their exports without fearing each other.