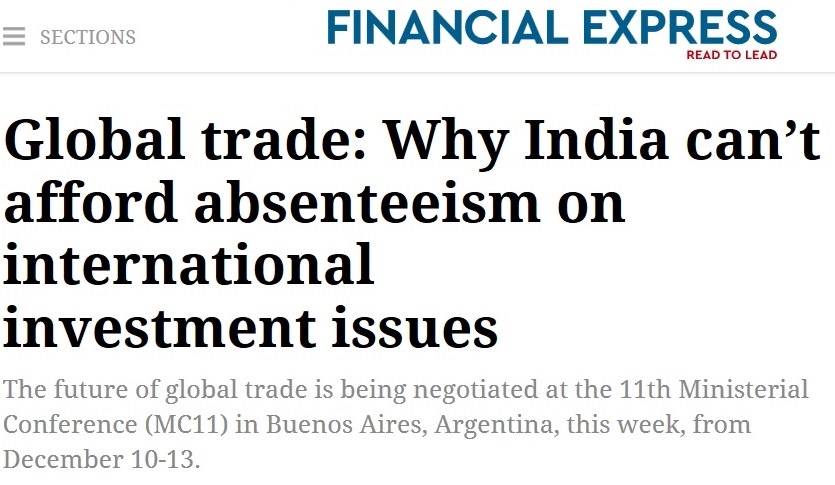 The future of global trade is being negotiated at the 11th Ministerial Conference (MC11) in Buenos Aires Argentina this week from December 10-13.The Indian representation on the multilateral forum is taking up issues of public stock-holding for food security special safeguard mechanism and domestic support and subsidies to fisheries to promote the interests of its .5 trillion economy.

The future of global trade is being negotiated at the 11th Ministerial Conference (MC11) in Buenos Aires Argentina this week from December 10-13. The Indian representation on the multilateral forum is taking up issues of public stock-holding for food security special safeguard mechanism and domestic support and subsidies to fisheries to promote the interests of its $2.5 trillion economy. However the government is likely to stay at arm’s length from any discussion on newer issues such as investment due to the premature framework of the investment policies in a multilateral framework. The key question is: Can India afford to miss boarding the investment cart?

India believes that investment is a bilateral issue to be decided by the country’s government and that new issues such as investment are outside the purview of the WTO and MC11. India also believes that the focus should remain on solving the crucial issues of finding a permanent settlement to public stock-holding for food security purposes and continued focus on agricultural reforms.

But in recent weeks India has managed to garner support of nearly 100 countries on this issue whereas China and Argentina which have been pushing for investment facilitation to be included in the agenda of MC11 have the support of 45 countries. Even the US is opposed to the idea of inclusion of investment regulations at the multilateral forum. Although South Africa is supporting India on this front India is in direct conflict with its major BRICS partner countries namely Brazil Russia and China on this issue. This is also a reflection of the shallow cooperation that exists in the groupwhose main objective was to stand as a united front on all issues at the multilateral forum.

An ideal multilateral negotiation is about ‘give and take’. It becomes easy to protect our own interests by promoting the interest of the partners even though sometimes in disjoint areas. Therefore to achieve a new outcome one should have an offer to make. This involves strategic position over a long time which can of course change with time as the regime evolves further. The investment regime is currently among the most hotly-debated policy areas in multilateral regional and bilateral partnerships.

Recently India demonstrated its muscle by announcing a new investment treaty for its bilateral investment negotiations. This is particularly impressive given the fact that India’s bilateral investment engagement dates not too back beyond two-and-half decades only. The new Bilateral Investment Treaty (BIT) introduced some significant changes effective through expansions amendments or clarifications; inclusions and omissions. It is a major departure from earlier models as it incorporates substantial changes in its attempt to safeguard the host state’s interests. Subsequently bilateral investment partners have been served notices for treaty termination or renegotiation. Interestingly some treaty partners have agreed for a renegotiation underscoring India’s potential to attract foreign investment.

The revised model BIT certainly makes it clear that India wishes to be the rulemaker rather than rule-taker in rewriting the rules of the investment architecture. It remains to be seen which of the new features of India’s revised BIT actually find a place in the BITs that India seeks to negotiate though it is apparent that several countries are likely to resist many of the proposed changes. To the extent that the model BIT text is adopted between India and certain states investors are to be expected to negotiate a specific investment agreement suited to their interests rather than rely on the limited protections contained in the model BIT.

While committing highly dedicated efforts to regulate the bilateral investment regime it is hard to accept India’s directionally opposite position in multilateral negotiations. Maintaining the government approach to negotiate investment bilaterally a completely alienated position in the multilateral forum is uncalled for. Instead of staying away in isolation to engage would be a better strategy. This is more important in the case of investment issues where even definitional clarities are yet to be reached and expected to evolve continuously in a dynamic manner. Staying involved rather than a complete disengagement will not only help India to understand the regime but also have a say in the issues from the initial stage.

Apart from early-mover advantage from engagement on the multilateral platform this will provide India the implicit opportunity to understand the nuances of bilateral issues. Multilateral discussions can be a stage setting for casting amicable solutions to regional and bilateral issues. Time has taught these lessons—negotiations on trade-related issues have witnessed an experience where multilateralism as the starting point paved the way for deeper regionalism and bilateralism. Adopting the ‘learning while doing’ approach on investment issues will furthermore be helpful for the organic evolution of India’s BIT through successive revisions.

Developed countries will continue to push for investment facilitation rules to be a part of the WTO agenda at Buenos Aires and have called for plurilateral negotiations to discuss investment facilitation and regulation which goes against what India has been propagating. But it is becoming increasingly clear that India cannot afford absenteeism on international investment issues. This is a polarised position when viewed against the enthusiastic and authoritative approach on a bilateral front. In complete acknowledgement of the preliminary and unclear nature of the current international investment discipline any commitments from India are far from being justified. However engagement would be an offer to make. An early involvement without an obligation will pay in the long run in terms of wisdom and experience which will help a strong footing in negotiating at the bilateral levels and later at the multilateral level. India must therefore act in time and ride the cart before it gets crowded.