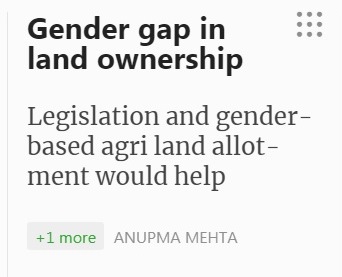 Women comprise over 42 per cent of the agricultural labour force in the country signifying increasing feminisation of agriculture and yet they own less than 2 per cent of its farm land. According to the India Human Development Survey (IHDS) notwithstanding laws ensuring women’s rights to agricultural land most such land is owned by either men or undivided families. The IHDS a nationwide panel survey covering 41554 households in 1503 villages and 971urban neighbourhoods across India in two waves (2004- 05 and 2011-12) is jointly organised by the University of Maryland and the National Council of Applied Economic Research (NCAER).

It is also the first large-scale survey administering questions on acquisition and ownership of agricultural land.

TheIHDSfindsthat57percentofrural and 9 per cent of urban households own any agricultural land. What is of greater concern is that 83 per cent of the agricultural land is reportedly inherited by male members of the family and less than 2 per cent by their female counterparts with the remainder being acquired through other means. A region-wise disaggregation of the data shows persistently low female ownership of farmland in all the regions ranging from 28 per cent in the hills to only around 8per cent each in the east and west.

The IHDS findings are substantiated by the World Economic Forum’s Annual Meeting at Davos in January 2018 which reported that India is one of15 countries in the world mostly located in South Asia Latin America and sub-Saharan Africa where the prevalence of patriarchal traditions prevents women from enjoying equal ownership rights to property. Ironically most of these nations subscribe to the UN’s post-2015 Sustainable Development Goals (SDGs) especially Indicator SDG 5.a.1 which seeks to augment women’s share as rights-bearers of agricultural land by types of tenure.

The numerous barriers in land ownership that Indian women face include lack of legal awareness about their inheritance rights their reluctance to claim property from hostile family members and the skewed implementation of laws fuelling gendered social discrimination. One of the primary reasons for this is the mediation of women’s land rights in India through various personal laws and customary practices rather than through legal discourse. “The property rights of the Indian woman depend on which religion she follows if she is married or unmarried which part of the country she comes from if she is a tribal or nontribal and so on” argues Shruti Pandey PIL lawyer in the Supreme Court and Delhi High Court and former National Director of the Women’s Justice Initiative of Human Rights Law Network India. Pandey contends that the property rights of Indian women are not only immune from Constitutional protection but also vastly discriminatory and arbitrary with women being assigned much lower shares in family property than men. A notable exception is the Civil Code in the state of Goa derived from Portuguese laws which has unique provisions ensuring joint ownership and equal share in each other’s property for married couples and a stipulation that daughters cannot be given a lesser share than sons. Although the Goanese code is often touted as a model for a potential Uniform Civil Code across the country it too does not translate into action on the ground.

Activists argue that the conundrum of gender-based land ownership can be tackled through simple solutions. One instance is an ongoing partnership between the West Bengal Government and the Landesa Rural Development Institute working to secure legal land rights for poorest families. They found that merely ensuring sufficient space in land certificates to enable listing of both husbands and wives as owners had a huge impact leading to the inclusion of women in a majority of the land titles in the state. Such schemes could lead to a ripple of positive developments for women such as enhanced decision-making power better child nutrition and household food security improved educational attainment for girls and even the confidence to counter domestic violence and abuse. Political tools such as legislation and gendered allotment of agricultural land would certainly help. But the real change will come only when the women themselves stand up to claim their rightful ownership of property and the wide-ranging empowerment it brings.

(The writer is editor at the National Council of Applied Economic Research. Views expressed in this article are personal)