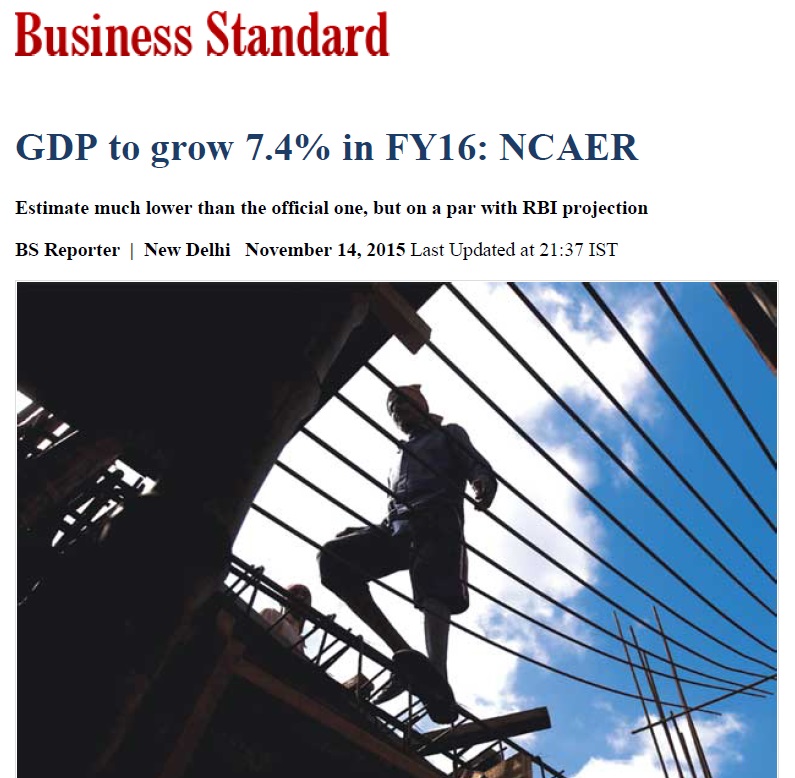 India’s gross domestic product (GDP) would grow 7.4 per cent in 2015-16 much lower than current official estimates of 8.1-8.5 per cent the National Council of Applied Economic Research said in its mid-year review of the economy on Saturday. The think-tank said: “Industrial growth continues to gather strength while the outlook for services remains mixed. Overall demand remains sluggish because of weak external demand and dampened rural demand. Investment shows weak signs of revival.” In August NCAER had forecast GDP growth for the current fiscal at 7.5 per cent.

NCAER’s projections are at par with the Reserve Bank of India (RBI)’s GDP growth estimates of 7.4% in the September monetary policy and within the range of 7.3-7.6 per cent estimated by the International Monetary Fund World Bank Moody’s Analytics and Asian Development Bank.

The official estimates of 8.1-8.5 per cent projected in the last economic survey are expected to be revised when the July-September economic growth data is available. On Saturday NCAER said while the industrial sector performed better year-over-year in the first half of the financial year the services sector was sluggish. “The services sector excluding construction shows signs of waning growth; slowing down in the first quarter of the current fiscal (on a year-on-year basis) to 8.9 per cent compared to 9.2 per cent in the quarter 4 of 2014-15” it said adding the outlook for the rest of the year looked ‘mixed’.

“For the second year in a row the actual rainfall received during June-September period of 2015-16 was below normal… Despite deficit rainfall NCAER estimates the overall food grain output during this year’s kharif season may be marginally higher compared to last year due to better rainfall conditions in areas where coarse cereals and pulses are grown” it said.

The report noted that while inflation had moderated expectations continue to be high and inflation volatility showed signs of increasing. “The RBI front-loaded a rate cut with a 50 basis point reduction in the repo rate. The rate cut is intended to create an environment conducive for boosting investment expenditure. However monetary transmission has remained weak” it added.

“Nominal demand for credit witnessed some sluggishness in growth for the first half of 2015-16. Public sector banks continue to be plagued by non-performing assets” the report stated.

The report credited the government for doing ‘largely commendable’ work on the fiscal front compared to the same period last year. On the external front however the first half of the year was not that good for merchandise exports with dull prospects for the rest of the financial year.