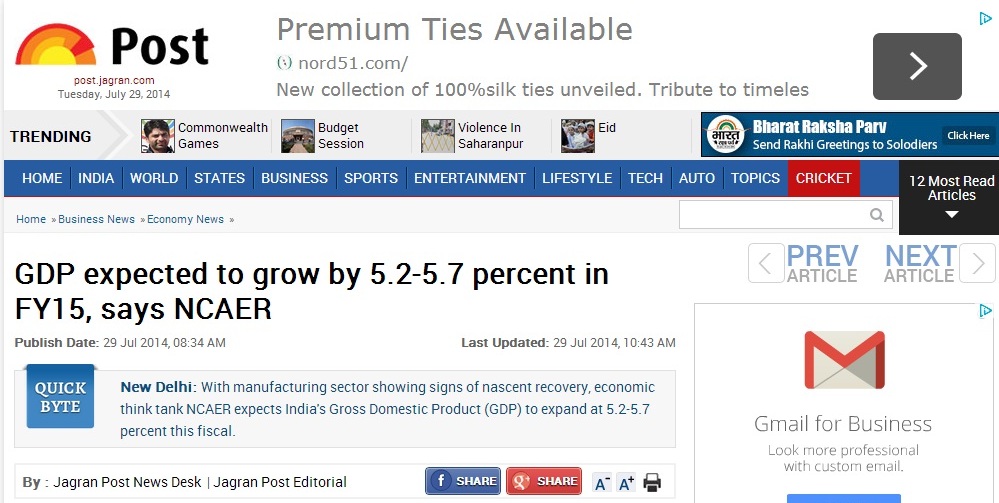 “GDP growth rate for 2014-15 is projected at 5.2-5.7 percent. The higher growth of 5.7 per cent is conditional on pick up of investment spending” National Council of Applied Economic Research (NCAER) said in a statement.

India recorded sub-five percent in 2012-13 and 2013-14 due to general global slowdown and domestic factors like high interest rate and stubborn inflation.

The Economic Survey expects the country’s economy to expand by 5.4-5.9 percent this fiscal.

The index of industrial production (IIP) the principal indicator for industrial activity grew by 3.4 percent and 4.7 percent in the months of April and May 2014 respectively.

Manufacturing which accounts for 75 percent of the index showed signs of nascent recovery clocking a growth of 2.5 percent and 4.8 percent in April and May respectively as against negative growth in the earlier months.

NCAER further said that growth in agriculture sector is likely to be lower in 2014-15 year-on-year due to poor monsoon.

Finance Minister Arun Jaitley while presenting the Budget had said government will retain the fiscal deficit target for 2014-15 at 4.1 percent of GDP.

NCAER has projected the wholesale price based average inflation rate at 6.4 percent in the fiscal