For clean air, use market-based tools 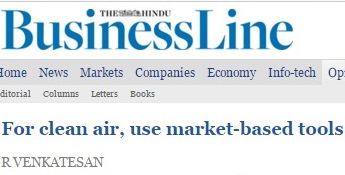 During the late 1990s the United Nations Environment Programme (UNEP) worked with six countries in comprehensive projects to identify the impact of liberalisation on environmental resources and the use of economic instruments to sustainably manage these impacts.

The India-specific project focused on motor vehicle emissions and air pollution in Delhi and the relationship with the SAP.

The UNEP believed that any negative impact of the structural adjustment programme (SAP) on the environment could be minimised by integrating environmental considerations. The agenda of economic reforms in many developing countries during the 1980s and 1990s was aided by structural adjustment loans from the World Bank; there was a great deal of uniformity in SAP which set the course of economic reforms in developing economics.

The study published in 1999 focused on market-based instruments (MBIs) in abating vehicular pollution rather than the conventional command and control (CAC) approach. How can this study carried out in 1999 be relevant today?

At that time Delhi had an acute air pollution problem associated with the use of energy in the transport sector.

It was among the 12 cities mentioned in the 1992 WHO/UNEP report on urban air pollution in the world’s megacities.

Remember Delhi did not have CNG buses then the first leg of metro rail (55-60 km) that was expected to reduce vehicular pollution by about 200 metric tonnes per day was yet to be operational and the sub-optimal mix of petrol and lubricating oil for two-wheelers had further aggravated the problem.

The UNEP report had identified that the use of CNG reduces CO and NOX emissions by 20 per cent and particulate emissions by about 90 per cent. The research agency that carried out the study for the UNEP was NCAER. In 1998 vehicular emissions in Delhi in tonnes per day was estimated at around 2300; the report mentioned that buses were responsible for 9.5 per cent of total emissions two-wheelers 14.3 per cent three-wheelers 7.9 per cent cars 21.8 per cent commercial vehicles 44.9 per cent and taxis around 1.4 per cent.

The then Delhi government rightly estimated that asking all buses and three-wheelers to switch to CNG was the solution.

We do not have a clear picture of the current situation: the emission factor by vehicle type (gram per km) the average distance travelled per day by vehicle type number of vehicles by types and so on. These are basic inputs to arrive at the proportion of total emissions caused by vehicle types.

Without such computations and assuming that cars and trucks are the major culprits various CAC measures are being suggested:

2. Allow diesel commercial vehicles to enter city only at night.

3. Provide exemption for cars beyond 8 pm and before 8 am.

Market-based instruments (MBIs) that could achieve the objective of mitigating air pollution without inconveniencing the public. Some of these measures could include

1. Restriction of new diesel vehicles through price disincentives such as levy of Environmental Excise Duty (EED)

2. Incentive to scrap old diesel vehicles such as exemption from levy of EED if the new vehicle replaces an old one.

3. Instead of the odd-numbered number plates on odd dates why not levy “permits” for a fee for plying on all days of the month with a higher “permit fee” for luxury cars vis-à-vis standard cars.

4. MBI revenues could be used to construct bypasses so that commercial vehicles don’t need to drive through the city.

Instead of restricting the plying of commercial vehicles at during nights (that would not diminish air pollution) such MBIs can mitigate air pollution without inconveniencing the public.

The writer is a senior consultant with NCAER. The views are personal