Five-Year Plan: The difference between five and eight per cent: Shashanka Bhide and Purna Chandra Parida 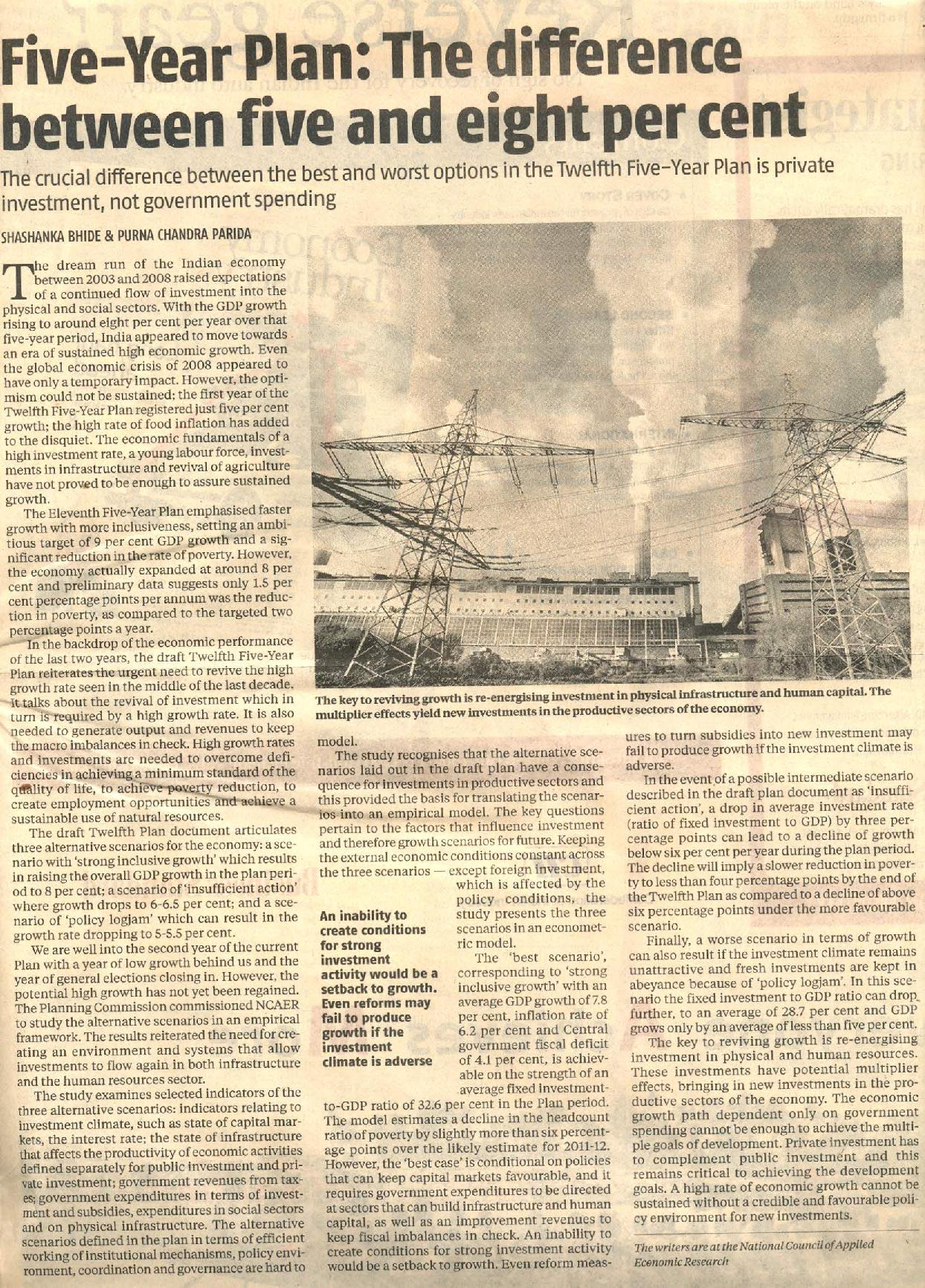 The dream run of the Indian economy between 2003 and 2008 raised expectations of a continued flow of investment into the physical and social sectors. With the GDP growth rising to around eight per cent per year over that five-year period India appeared to move towards an era of sustained high economic growth. Even the global economic crisis of 2008 appeared to have only a temporary impact. However the optimism could not be sustained; the first year of the Twelfth Five-Year Plan registered just five per cent growth; the high rate of food inflation has added to the disquiet. The economic fundamentals of a high investment rate a young labour force investments in infrastructure and revival of agriculture have not proved to be enough to assure sustained growth.

The Eleventh Five-Year Plan emphasised faster growth with more inclusiveness setting an ambitious target of 9 per cent GDP growth and a significant reduction in the rate of poverty. However the economy actually expanded at around 8 per cent and preliminary data suggests only 1.5 per cent percentage points per annum was the reduction in poverty as compared to the targeted two percentage points a year.

In the backdrop of the economic performance of the last two years the draft Twelfth Five-Year Plan reiterates the urgent need to revive the high growth rate seen in the middle of the last decade. It talks about the revival of investment which in turn is required by a high growth rate. It is also needed to generate output and revenues to keep the macro imbalances in check. High growth rates and investments are needed to overcome deficiencies in achieving a minimum standard of the quality of life to achieve poverty reduction to create employment opportunities and achieve a sustainable use of natural resources.

The draft Twelfth Plan document articulates three alternative scenarios for the economy: a scenario with ‘strong inclusive growth’ which results in raising the overall GDP growth in the plan period to 8 per cent; a scenario of ‘insufficient action’ where growth drops to 6-6.5 per cent; and a scenario of ‘policy logjam’ which can result in the growth rate dropping to 5-5.5 per cent.

We are well into the second year of the current Plan with a year of low growth behind us and the year of general elections closing in. However the potential high growth has not yet been regained. The Planning Commission commissioned NCAER to study the alternative scenarios in an empirical framework. The results reiterated the need for creating an environment and systems that allow investments to flow again in both infrastructure and the human resources sector.

The study examines selected indicators of the three alternative scenarios: indicators relating to investment climate such as state of capital markets the interest rate; the state of infrastructure that affects the productivity of economic activities defined separately for public investment and private investment; government revenues from taxes; government expenditures in terms of investment and subsidies expenditures in social sectors and on physical infrastructure. The alternative scenarios defined in the plan in terms of efficient working of institutional mechanisms policy environment coordination and governance are hard to model.

The study recognises that the alternative scenarios laid out in the draft plan have a consequence for investments in productive sectors and this provided the basis for translating the scenarios into an empirical model. The key questions pertain to the factors that influence investment and therefore growth scenarios for future. Keeping the external economic conditions constant across the three scenarios – except foreign investment which is affected by the policy conditions the study presents the three scenarios in an econometric model.

The ‘best scenario’ corresponding to ‘strong inclusive growth’ with an average GDP growth of 7.8 per cent inflation rate of 6.2 per cent and Central government fiscal deficit of 4.1 per cent is achievable on the strength of an average fixed investment-to-GDP ratio of 32.6 per cent in the Plan period. The model estimates a decline in the headcount ratio of poverty by slightly more than six percentage points over the likely estimate for 2011-12. However the ‘best case’ is conditional on policies that can keep capital markets favourable and it requires government expenditures to be directed at sectors that can build infrastructure and human capital as well as an improvement revenues to keep fiscal imbalances in check. An inability to create conditions for strong investment activity would be a setback to growth. Even reform measures to turn subsidies into new investment may fail to produce growth if the investment climate is adverse.

Finally a worse scenario in terms of growth can also result if the investment climate remains unattractive and fresh investments are kept in abeyance because of ‘policy logjam’. In this scenario the fixed investment to GDP ratio can drop further to an average of 28.7 per cent and GDP grows only by an average of less than five per cent.

The key to reviving growth is re-energising investment in physical and human resources. These investments have potential multiplier effects bringing in new investments in the productive sectors of the economy. The economic growth path dependent only on government spending cannot be enough to achieve the multiple goals of development. Private investment has to complement public investment and this remains critical to achieving the development goals. A high rate of economic growth cannot be sustained without a credible and favourable policy environment for new investments.

The writers are at the National Council of Applied Economic Research
Published in: Business Standard, July 14, 2013
Download