The 2020 Union Budget has failed to provide any fiscal stimulus based upon the assumption that there is no fiscal space for providing growth stimulus. In doing so it missed out on the opportunity of leveraging an additional fiscal space of around 10% of the gross domestic product that could have been tapped through revenue and expenditure rationalisation measures.

The 2020–21 Union Budget was expected to provide a strong fiscal stimulus to revive faltering economic growth. Those expectations have been belied. The revenue projections though still overly optimistic are more realistic than the revenue projections of the past two years. But in aligning expenditure plans to these revenue projections without any effort to mobilise additional revenues this budget has failed to provide the required fiscal stimulus. In the sections that follow we discuss in sequence the fiscal stance of the budget its revenue measures expenditure allocations and missed opportunities that the budget could have addressed to revive growth.

Taking advantage of the low inflation environment the Reserve Bank of India (RBI) repeatedly lowered the repo rate since February 2019 in an effort to bring down the structure of lending rates and finally announced a pause in December 2019 as inflation rose. It also undertook open market operations and other monetary measures to stimulate investment and growth. However these monetary policy measures have proved to be ineffective. Transmission has been weak with little decline in the weighted average lending rate on fresh loans and the spread between the policy rate and the benchmark 10-year g-sec rate remaining elevated at 171 basis points. Credit growth has declined in all categories except personal loans. Meanwhile the growth in investment expenditure has declined sharply and so has growth.

That monetary policy has failed to revive the investment and growth cycle is not really surprising given the strong fiscal dominance of the financial sector. Large-scale sovereign borrowings by the central and state governments at relatively high riskless rates set a high threshold for lending rates for the private sector. Fiscal dominance in fact extends well beyond the government’s market borrowing to include high rates on National Small Savings Fund government provident fund deposits etc. Further government-owned banks and non-bank financial institutions dominate the financial market. In this fiscally dominated environment outcomes even in the financial sector the core domain of monetary policy are driven by fiscal policy. Hence it is fiscal policy that has to do most of the heavy lifting for reviving growth. The macroeconomic stance of the 2020–21 budget has to be assessed against this background.

There is a wide consensus that the sharp decline in growth is largely attributable to weak aggregate demand. Hence growth revival requires a strong public expenditure push. However an expenditure push does not necessarily have to be financed by a larger deficit. It can be financed through additional revenue mobilisation tax policy measures as well as additional non-tax revenues through asset sales to finance capital expenditure. The expansionary impact of increased central government expenditure can vary depending on how it is financed and also on how the expenditure is structured. This is because the multiplier effect of tax-financed spending is weaker than the expenditure financed by non-tax revenues asset sales or a larger deficit. Similarly the expansionary impact of capital expenditure is higher than that of revenue expenditure (Mundle et al 2011). Mundle and Sikdar (2020) have also argued that the multiplier effect of income support for the poor is stronger than that of other forms of revenue expenditure.

However it turns out that the sources of financing central government expenditures have been fairly stable. Total expenditure amounting to about 15% of the gross domestic product (GDP) has been more or less evenly financed by tax revenue and the other sources taken together (Table 1).1 The structure of spending has also been fairly stable. Hence the growth impact of central government expenditure has primarily depended on how it has increased and not so much on its financing or its composition. 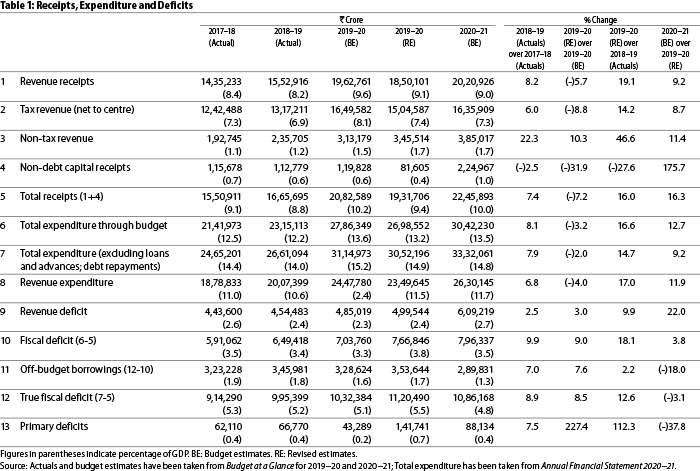 Total expenditure in 2020–21 (budget estimate or BE) is expected to grow by 9.2% compared to 14.7% in 2019–20. This deceleration of expenditure growth entails a weakening of the fiscal impulse. Even the 14.7% growth in central expenditure in 2019–20 failed to arrest declining growth. Hence the weaker fiscal impulse this year is unlikely to revive growth. In the absence of a strong fiscal stimulus we can expect to see yet another year of low GDP growth unless there is strong growth in other components of aggregate demand.

A comment is needed here on the issue of reforms versus fiscal stimulus. Reforms are important for sustaining high growth but it takes time for their growth effects to play out. A fiscal stimulus can revive growth in the short term thereby buying the time required for reforms to take effect over the medium to long term. Fiscal stimulation and reforms therefore are complementary policies and not competing alternatives.

On the revenue side of the budget one of the two most significant developments in direct taxes is the conditional reduction in the corporate tax rate. While in December 2019 the corporate tax rate was reduced from 30% to 22% for existing companies and 25% to 20% for new manufacturing companies the current budget has now extended the reduction to new service companies. The other is the introduction of a similar conditional graded reduction in income tax rates for taxable income up to `15 lakh. The condition to become eligible for these lower rates is that the tax payee must forgo all exemptions and concessions. 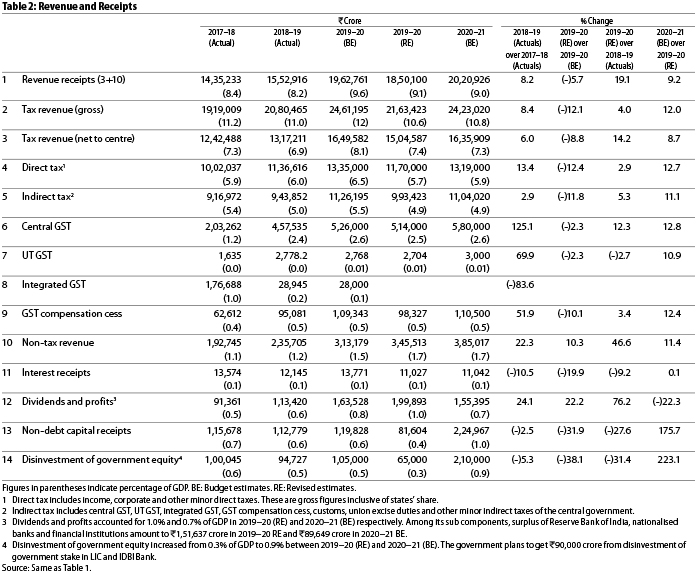 Indirect taxes are also projected to grow by 11.1% as compared to only 5.3% last year. This optimism is presumably on account of the goods and services tax (GST) which grew by 12.3% last year despite all its implementation problems. It is projected to grow by 12.8% in 2020–21. There is also the growing share of cess and surcharges which are not shared with the states.

In contrast total central tax revenue net of states share is projected to grow at a conservative rate of 8.7% though it grew by over 14% in 2019–20. This is presumably attributable to the large shortfall in the GST compensation cess compared to the mandated volume of compensation to be transferred to the states. In sum though some projections are unduly optimistic the overall projection of tax revenue (net to centre) is more realistic than the fairy-tale tax revenue projections of the last two years.

Non-tax revenue growth is projected to decelerate sharply to 11.4% in 2020–21 (BE) down from 46.6% in 2019–20 (RE) (Table 2). This is mainly on account of the projected decline in dividends and profits by over 22% after having grown by a massive 76.2% in 2019–20 (RE). The flip-flop derives mainly from the huge transfer of RBI surpluses last year based on the recommendations of the Jalan Committee.

Non-debt capital receipts which declined by 2.5% in 2018–19 and a further 27.6% in 2019–20 (RE) are now projected to increase by nearly 176% in 2020–21 (BE). This reflects the planned disinvestment of government equity amounting to `210 lakh crore in public enterprises like the Life Insurance Corporation of India the Industrial Development Bank of India etc. Such large divestment will be a challenge of considering that the government managed to divest only `65000 crore in 2019–20 against a target of `105 lakh crore (Table 2). More important is the question of whether the proceeds will be spent on capital formation or on revenue expenditure. That would be akin to a distressed household selling off family assets to meet consumption expenses.

From the perspective of demand generation and equity the allocation of expenditure is mixed. Among the broad categories of expenditure expenditure on social services has grown the fastest at 11.8% while expenditure on economic services has grown at 5.7% (Table 3 p 22). However this is mainly a small base effect. Total social services expenditure accounts for less than 5% of the total expenditure compared to about 34% for economic services. The maximum share goes to general services at 43.6% with interest payments—the largest component—eating up as much as 22%. This is a large leakage from the demand-generating expenditure stream. The second largest component defence is projected to grow by only 2% in this budget. Between 2017–18 and 2020–21 (BE) its share has declined from 11.5% to 10% that is a 15% drop. This is surprising in view of the emphasis given to national security by this government. 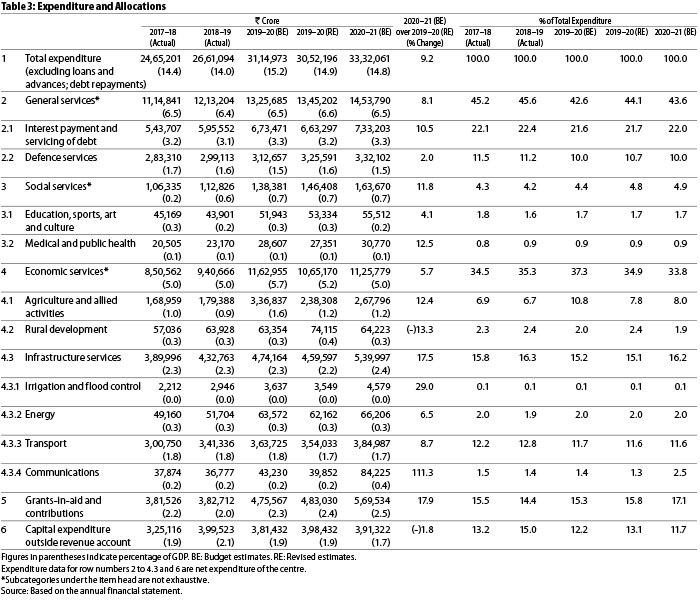 Within social services the high increase is mainly on account of health services at 12.5% with expenditure on education budgeted to grow by only 4.1%. Among economic services the maximum increase is in infrastructure services (17.5%) a priority for the present government. This will have a strong demand-generating impact. Expenditure on agriculture and allied activities will also grow rapidly at 12.4% its largest components being crop production mainly the Pradhan Mantri Kisan Samman Nidhi (PM-Kisan) scheme and warehousing and storage. But the increase in agriculture and allied services has come at the cost of a reduction of over 13% in expenditure on rural development including the Mahatma Gandhi National Rural Employment Guarantee Act (MgNREGA) an adverse move both for equity as well as demand stimulation. Especially so because a large part of expenditure on warehousing and storage—constructed under MgNREGA—is interest payments again a leakage from demand.

The budget has failed to provide a fiscal stimulus mainly because it is based on the assumption that there is no fiscal space to provide such a stimulus. This is true if increasing the deficit is considered the only means of financing a fiscal stimulus since the true fiscal deficit or more appropriately the total public sector borrowing requirement is already very large. But there are other ways of financing a stimulus.

An estimate from the Accountability Initiative project of the Centre for Policy Research revealed that appropriated funds for various schemes amounting to 1.7% of the GDP have actually not been spent. A large part of this could be released by rationalising fund flows. Further revenue forgone on account of various tax concessions and exemptions amount to another 3% of the GDP2 much of which could have been recovered if the withdrawal of such exemptions and concessions had been made compulsory without linking them to an optional lower tax regime. Finally it has been estimated that unwarranted non-merit subsidies amount to another 5% of GDP (Mundle and Sikdar 2020).

Thus there is a potential additional fiscal space amounting to a massive 10% of the GDP. Mobilising even half of this through the rationalisation of revenue and expenditure could give a huge fiscal stimulus to revive faltering growth. Mundle and Sikdar (2020) cited above had proposed such a stimulus package consisting of (i) an income support programme of Rs12000 per household per year preferably without targeting amounting to 2% of the GDP3 (ii) an additional 1% of the GDP investment in labour-intensive infrastructure projects like the Pradhan Mantri Gram Sadak Yojana and (iii) an additional outcome-linked expenditure of 1% of the GDP each on education and health. All this could be done without any increase in either tax rates or the fiscal deficit. In fact the balance fiscal space could be used to actually reduce the fiscal deficit.

3 The Mundle and Sikdar (2020) paper had inadvertently implied that the `12000 income support would be per person rather than per household. We are grateful to Rahul Khullar for pointing out this error.

Sudipto Mundle (Distinguished Fellow) and Ajaya Sahu (Senior Research Analyst) are with the National Council for Applied Economic Research Delhi. These are the author’s personal views.