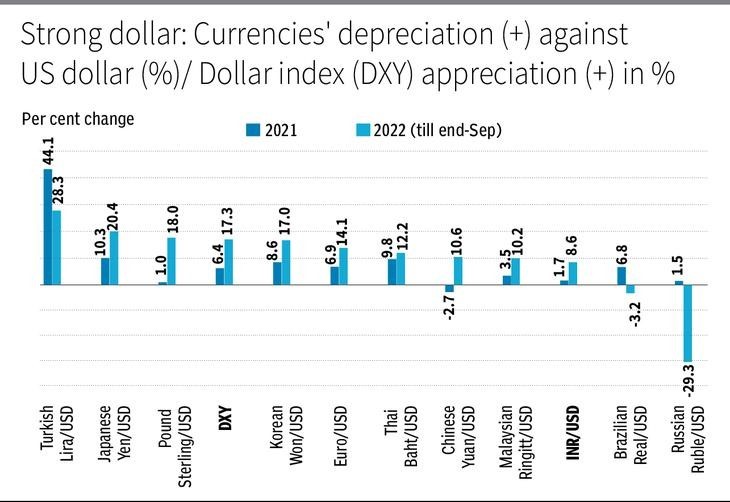 Open economy challenges may haunt policies ahead as spillovers intensify

A common economic sophism is that fiscal policy can prop up growth even when monetary policy is assigned to bringing inflation under control. In the short run, lifting demand amid supply constraints will only fuel inflation and the twin deficits, with a wider fiscal gap feeding into a wider current account deficit (CAD).

The pandemic has already made debt dynamics unsustainable in several economies. IMF research shows that a one percentage point unanticipated contraction fiscal balance reduces the CAD, on average, by 0.8 percentage point of GDP.

With the four large central banks expanding their balance sheets by about 8x since 2007, demand and inflation have returned with a vengeance. Private wealth and inequities have increased on the back of fiscal support and large central bank liquidity. This has accentuated CAD to unsustainable levels in some countries. Careful countervailing policy action is required. Open economy considerations will rule monetary and fiscal policies, going forward.

Fiscal policy, and not monetary policy, will determine long-term interest rates in the Indian economy. More of fiscal restraint will be needed to avert interest rate shock.

It is time to move back to the 15th Finance Commission’s fiscal consolidation path envisaged under its baseline macroeconomic assessment. It envisages GFD/GDP ratio at 4 per cent by 2025-26. Union Budget 2021-22 had announced the government’s intention to reduce the GFD (gross fiscal deficit) below 4.5 per cent by 2025-26. In this year’s Budget, the government reiterated the resolve to meet this target. However, this target is consistent with the 15th Finance Commissions’ worse-case scenario of slower than assessed recovery path from the pandemic.

Macroeconomic conditions are evolving better than anticipated. The key metric of nominal GDP growth was 19.5 per cent in 2021-22 against the base case projection of 13.5 per cent by the Finance Commission. This year too it will easily exceed the 9.5 per cent growth assumed by the Commission.

The government, however, will not be able to meet even the slow post-pandemic recovery scenario targets unless it packages next year’s Budget with a clear strategy to downsize government. This seems an uphill task given that not even two state-owned banks have been privatised this year. Opposition should support the needed reforms, but if political consensus is elusive, the government that has a clear mandate, must push reforms that are never painless.

Next year’s Budget will set the course for the economy. Given the impending slowdown, the 15th Finance Commission’s base case GFD/GDP ratio of 5 per cent for 2023-24 looks difficult but the government must make sincere efforts to bring the ratio down to 5.5 per cent.Those who think this is big adjustment, may be reminded of how successfully the Euro area did the same. The region ran a general government deficit (net borrowing) of 6 per cent of GDP for two years after the global financial crisis but even with some improvement in growth, it went on massive fiscal consolidation and ran primary surpluses for five years from 2015 onward. This enabled them to expand the fiscal deficit by 6.4 percentage points in 2020 after the pandemic struck. Such is the power of counter-cyclical fiscal consolidation.

The impossible trinity will increasingly haunt macroeconomic policies in the near future. It is just not possible to maintain independent monetary policy, fixed exchange rate and an open capital account. The trilemma needs to be handled with less than corner solutions. Exchange rate can be managed but not pegged to a level. Markets can enter very choppy waters once financial conditions tighten and target Fed Funds rate peaks at about 5 per cent  next year. Fed had last month hiked by 80 basis points (bps) its guidance on its terminal rate. Dot plots could rise further by another 50 bps if inflation remains intransigent.

We have witnessed substantial global equity and bond market corrections in the first half this year, but the tightening cycle is far from over and very much likely to continue into next year. This could result in substantial tightening of global financial conditions into the next year. House price bubbles may burst in parts of the world soon with correction already underway in the US, China, the UK, Australia, Korea and many other parts of the world. The end of free money can do a lot to deepen fissures in the world of finance. The rising pressures on Credit Suisse are just tips of the iceberg.

We are already witnessing a clustering of volatility in the exchange rate market. While a section of the market has taken the call that the dollar has peaked, from the rate cycle perspective that looks rather hasty. The JPY-USD rate, which had dipped to as low as 131 in the first half of August on expectations of looser Fed policy, fell to almost 145 on Powell’s Jackson Hole speech later that month and is holding there. Japan intervened in the foreign exchange markets for the first time since 1998 but could not do much. Dollar strength can remain the bugbear for EM (emerging market) currencies till the middle of next calendar year and we must bulwark against such outcomes.

Our buffers have come very handy, but we have used a fair chunk of our ammunition early on, whereas exchange rate should best be treated as an automatic stabiliser while leaning against strong volatile movements. The RBI’s early July capital flow measures have done little to stem the tide.

In this milieu, the RBI will do well to encourage corporates to maintain a good hedge ratio. If the going gets worse, one cannot rule out radical measures, like quasi fiscal dollar borrowing (such as Resurgent India Bonds issued by SBI) or taking the oil companies’ demand out of the market.

Meanwhile, the open economy considerations call for continuing with rate hikes for the rest of the fiscal year and then holding them till the expected severe global slowdown starts biting Indian growth. It is best to stay focused on maintaining macro-financial stability and not overly worry about growth at this stage. Such is the nature of policy trade-offs.

The writer is IEPF Chair Professor at NCAER. He was formerly RBI’s Executive Director and an MPC member. Views are personal.