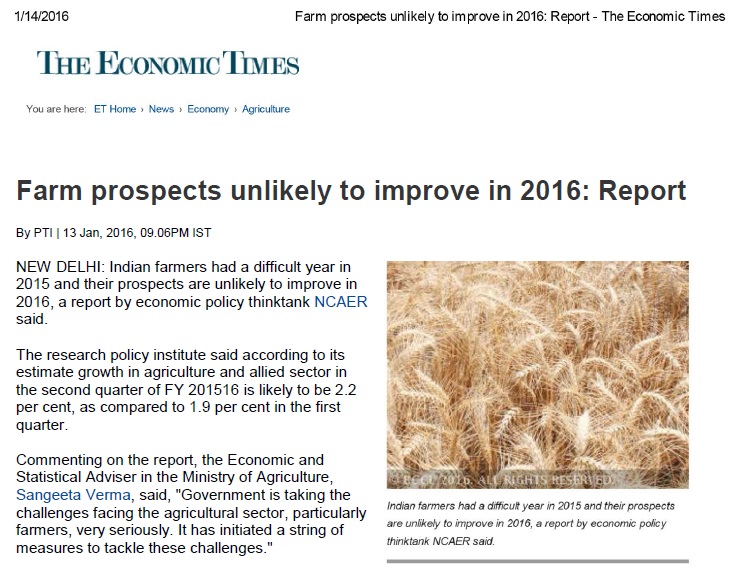 NEW DELHI: Indian farmers had a difficult year in 2015 and their prospects are unlikely to improve in 2016 a report by economic policy thinktank NCAER said.

The research policy institute said according to its estimate growth in agriculture and allied sector in the second quarter of FY 201516 is likely to be 2.2 per cent as compared to 1.9 per cent in the first quarter.

Commenting on the report the Economic and Statistical Adviser in the Ministry of Agriculture Sangeeta Verma said "Government is taking the challenges facing the agricultural sector particularly farmers very seriously. It has initiated a string of measures to tackle these challenges."

According to the NCAER report wheat production in marketing year 201617 is expected to be lower at 85 million tons as compared to the already poor 2015 production of 88.9 million tons due to poor weather and wheat exports are likely to remain negligible.

"The 201516 rabi rice production is expected to be somewhat lower than the 201415 production due to poor postmonsoon rains and lower water levels in reservoirs" the report said.

Rabi rice exports are forecast to decline to 9.0 million tonnes from 11.8 million tons in marketing year 201415
it added.

The report noted that external factors continue to remain less conducive to Indian agricultural exports this year as was the case last year.

Published in: The Economic Times January 13 2016