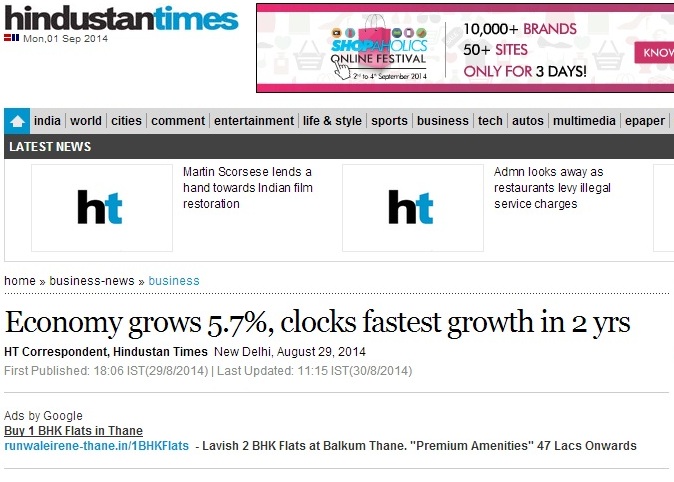 The Indian economy expanded at its fastest pace in two-and-a-half years in the quarter ending June on the back of a turnaround in manufacturing as sentiment was boosted by the Narendra Modi government’s measures to help recover from the longest slump in a quarter of a century.

Data released on Friday showed gross domestic product (GDP) grew by a better-than-expected 5.7% in April-June sharply higher than 4.6% in the previous quarter signalling a revival in the economy.

Asia’s third-largest economy expanded by less than 5% for two straight years because of policy logjams project delays and a string of corruption scandals. But the government said the economy had turned the corner.

“With improvement witnessed in some important sectors including manufacturing as well as in the performance of exports along with the measures taken by the government the economy can be expected to show further improvement in the remaining part of the year” a finance ministry statement said.A slew of other data also pointed to better times for the country’s financial health.

Domestic passenger vehicles sales grew for the third month in a row in July signalling a revival in demand that began when excise duties were lowered during the interim budget last February.

Data released by the Central Statistics Office (CSO) showed that the manufacturing sector which accounts for about 15% of the economy grew by 3.5% in April-June — the fastest in nine quarters— compared with a contraction of 1.4% in the previous quarter and a decline of 1.2% in the year-ago period.

Farm output grew 3.8% compared with 4% in the same quarter last year but patchy monsoon rains could affect agricultural income hurting sales of consumer goods such as refrigerators and vehicles. Importantly low farm output could push up food inflation which is hovering around 10%.

Capital goods output a broad gauge of investment activity grew 13.9% in April-June compared to a contraction of 3.7% in the same period of the previous year in what could be a sign that companies are adding new capacities.

The slide in the services sector which accounts for more than two-thirds of the economy appears to have been arrested. The sector including construction grew by 6.8% in the April-June quarter higher than 5.8% in 2013-14.

All the major components of the services economy — hotels communication trade and hotels — have recorded growth rates higher than the previous year although they are still far lower than the decadal average.

Between 2004-05 and 2009-10 the services sector which accounts for more than two-third of the Indian economy grew at an average of more than 10%. This pulled the broader economy’s growth to more than 8% for all years except 2008-09 when a financial crisis roiled the world economy.

The Congress however said it was not impressed.

“For those who have consistently got over 8% growth of Indian economy year after year and whose lowest average is the highest than the NDA’s highest average rate of growth we are not impressed” party spokesman Abhishek Singhvi said.