Drawing up a diet plan 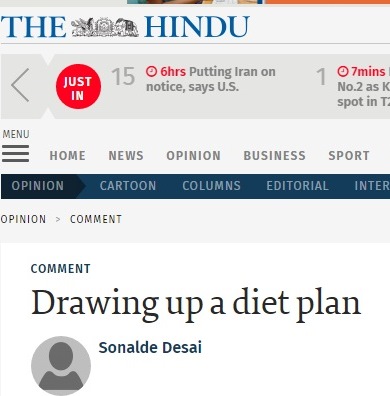 With the Kerala government’s decision to implement the National Food Security Act (NFSA) from April the whole country will be covered by the legislation. However if we expect the NFSA to improve India’s malnutrition statistics we may well be disappointed. According to a study by Himanshu and Abhijit Sen even before the NFSA is fully implemented use of the public distribution system (PDS) expanded sharply with proportion of households getting PDS subsidy rising from about 25% in 2004-05 to 50% in 2011-12. However decline in child malnutrition has been far more modest.

Why do we see this disconnect? Critiques of the PDS may point to leakages and suggest that perhaps these subsidies are not reaching the target beneficiaries. However a large number of studies have recorded improving performance of the PDS and suggest this may be an overly cynical assumption. Other critiques may argue that with rising incomes poverty has fallen in India and regardless of the PDS individuals may get sufficient calories making changes in PDS use irrelevant to caloric intake. This also seems somewhat of an overreach given the entrenched poverty in some sections of the country and society.

A recently released report based on India Human Development Survey of 2004-05 and 2011-12 suggests that the relationship between the PDS and nutrition may be more complex. Jointly organised by researchers from National Council of Applied Economic Research and University of Maryland this is the first nationwide survey to interview the same households at two points in time. By matching households with similar income family size land ownership and place of residence but one group with Below Poverty Line (BPL) or Antyodaya Anna Yojana (AAY) card and the other without these cards this study is able to compare apples to apples and examine the role of the PDS in a quasi-experimental design.

The results suggest that access to PDS subsidies changes the way people allocate their household resources. When rice wheat and other cereals are available cheaply households try to get more of their required calories from cereals and less from milk fruits and vegetables. Results show that households with BPL/AAY cards consume a monthly per capita average of 11.87 kg of cereals but only 2.77 litres of milk. In contrast households without BPL/AAY cards but at the same income level consume somewhat less cereals (11.22 kg) but more milk (3.21 litres). One would normally expect that the savings from cereal purchase due to price subsidies would be used to buy milk fruit and nuts but in an era where school and medical costs are rising and households face many other demands on their purse these savings seem to be spent on non-food items. Food consumption forms 56% of household budget in BPL/AAY households compared to a slightly higher level (58%) in matched households without access to PDS subsidies.

A prior study using the same data and a similar matching procedure published in a joint NCAER/Brookings journal India Policy Forum found that households with a BPL/AAY card were no better than households without PDS subsidies when it came to child nutrition. This may well be because access to cheap calories reduces consumption of different foods and dietary diversity is very important for balanced nutrition.

This does not mean that we should do away with food subsidies. The NCAER report mentioned earlier also found that for very poor households or households that experience income declines of 20% or more between the two surveys access to the PDS is very important for preserving food intake and dietary diversity. When faced with a sharp income decline households with BPL/AAY cards reduce their cereal intake by 770 g per capita per month and maintain their milk intake. In contrast households who can’t avail of food subsidies reduced their monthly per capita cereal intake by 930 g and milk intake by 280 milliliters.

The challenge lies in providing assistance to needy households to ensure adequate diets without creating conditions in which they opt for inferior diets that are heavy on cereals. This is a particular challenge for modern India where rates of diabetes high blood pressure and heart conditions are on the rise. Indian immigrants in the U.S. and U.K. also suffer from higher prevalence of these conditions than the native-born. So it may be that Indians have greater genetic predisposition for these so-called “lifestyle” diseases but it is also well recognised that these diseases are exacerbated by excessive consumption of carbohydrates amply available in cereals.

Cash transfers may be one way of dealing with this challenge. They would allow households to invest in better diets without circumscribing what they consume. However their success would depend on the ability to effectively administer transfers and reduce leakages. Moreover how this may affect grain markets remains unknown. International research on cash versus in-kind food subsidies presents mixed results with the effectiveness of cash transfers depending on the institutional framework. Current debates on Universal Basic Income tend to see it as an additional component of social safety nets. But if the mechanisms for effective administration of the UBI are in place it is possible to make a case for replacing PDS by cash transfers on nutritional grounds and this is well within the framework laid down by the NFSA.

Sonalde Desai is Professor of Sociology at University of Maryland and Senior Fellow at National Council of Applied Economic Research. Views are personal.