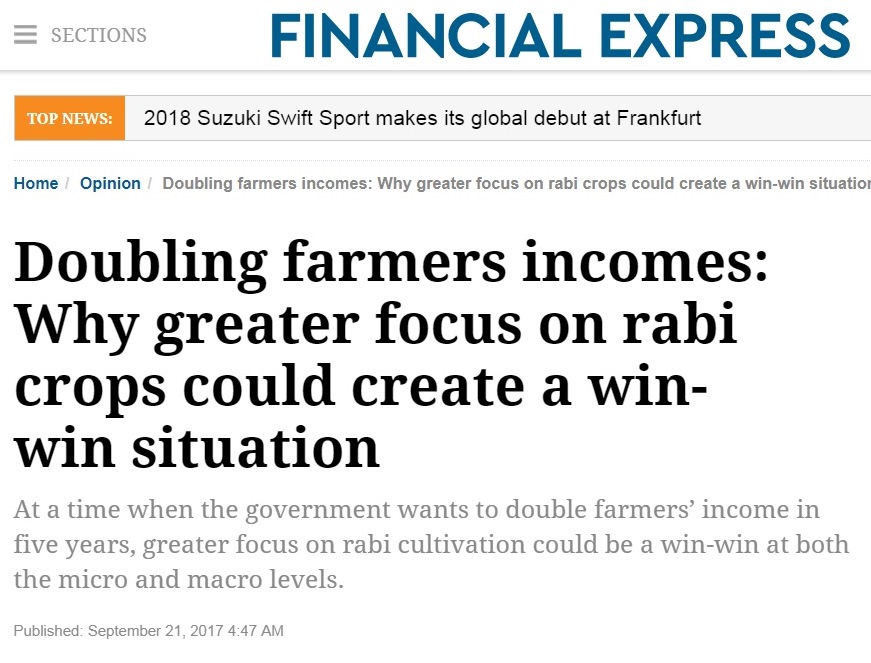 The total foodgrain production in India has more than doubled from 108.42 million tonnes in 1970-71 to 252.22 million tonnes in 2015-16. More importantly India is now the largest producer in the world of a host of farm products be it jute or dairy or total pulses buffalo meat and chicken products.

This is nothing short of a revolution for a country that not so long ago had to approach the global market cap in hand to feed its millions and it is widely acknowledged not only in India but globally as well. What is less known however is the shift in the seasonal cropping pattern that has accompanied this dramatic change viz. the growing contribution of rabi crop vis-à-vis kharif. Despite the fact that the area under rabi crops is 22.4% less than under kharif the share of rabi foodgrain production in total foodgrain production of the country has increased from 36.4% in 1970-71 to 50.83% in 2015-16. In contrast the share of kharif foodgrain production has declined from 63.6% to 49.16% during the same period (see table).

This is borne out by the 70th round of the National Sample Survey Organisation (NSSO) that collected information on the area under each crop quantity produced value of production and yield rates for both seasons (rabi was January-June 2013 and kharif was July-December 2012) for 10 common crops cultivated in both seasons—paddy potato jowar maize arhar (tur) moong sugarcane groundnut coconut and cotton. Except for two crops viz. jowar and cotton the productivity in terms of kg per hectare is much higher in the rabi season than in the kharif season. Specifically it is estimated that 57.85% of paddy 68.35% of maize 51% each of arhar (tur) moong and sugarcane 65% of groundnut and 51% of coconut output comes from crops grown during the rabi season.

Income of farmers by seasons

As per NSSO’s 70th round of the 90.2 million estimated agricultural households in the country 86.5% households were engaged in crop production during the kharif season whereas only 71.1% of agricultural households in the country were engaged in cultivation in the rabi season. Despite the higher share of households engaged in kharif cultivation the average gross cropped area was higher at 0.937 hectare per agricultural household during the kharif season as compared to 0.782 hectare per household during the rabi season. The average value of production of 10 common crops (which included value of harvested crop pre-harvested sale and value of by-products) per household during the kharif period was marginally higher at Rs 26258 as against Rs 25491 during rabi crops. However the income received from five products viz. paddy jowar maize potato and coconut is higher for the rabi season than the income received from these same crops grown in the kharif season because of seasonal price variations.

Using unit level data of NSSO’s 70th round—Situation Assessment Survey of Agricultural Households—to assess the efficiency of inputs used in agricultural production by the farmers with varying holdings in terms of land size both in rabi and kharif seasons it is clear that there are decreasing returns to scale on investment on agricultural inputs among all categories of farmers in both rabi and kharif cultivation. However here too data suggests the return on investment is higher for investment in rabi than in kharif crops. One rupee worth of investment in agriculture gives a return of 51 and 43 paise for large land holding categories of farmers in rabi and kharif season respectively. Clearly farmers benefit more from rabi than from kharif crops. In a nutshell the rabi foodgrain production contributes more to total foodgrain production despite lower land use and lower participation by agricultural households. At the same time individual farmers benefit more from rabi than from kharif crops. At a time when the government is seized with the issue of how to double farmers’ income in five years greater focus on rabi cultivation could be a win-win at both the micro and macro levels.