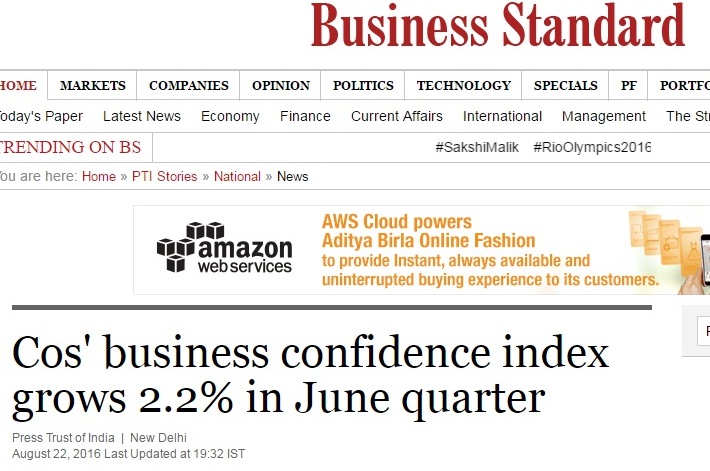 Economic think-tank NCAER’s business confidence index (BCI) registered a sequential increase of 2.2 per cent in June quarter of 2016-17 mainly driven by improvement in perception about economic conditions and financial position of firms in the next six months.

The increase in BCI was helped by improvement in sentiment in two out of its four components the National Council of Applied Economic Research (NCAER) said while sharing details of its 97th round of its Business Expectations Survey (BES).

BES tracks the business sentiment of over 500 Indian companies to compute the composite BCI.

The think-tank said BCI is developed on the basis of responses to four questions. Two of these are devoted to macro factors and the other two to micro.

Sentiment about the component — present investment climate is positive — remained largely unchanged. However perceptions on the metrics — capacity utilisation is close to or above optimal level — showed a decline.

“It was seen that firms were more optimistic about future economic conditions than about the present economic situation” NCAER said.

It further said all enterprise groups barring those with an annual turnover of less than Rs 1 crore show an increase or no change in BCI between April and July 2016.

The maximum growth of 8.1 per cent was witnessed in the case of firms with an annual turnover of Rs 100-500 crore.

(This story has not been edited by Business Standard staff and is auto-generated from a syndicated feed.)