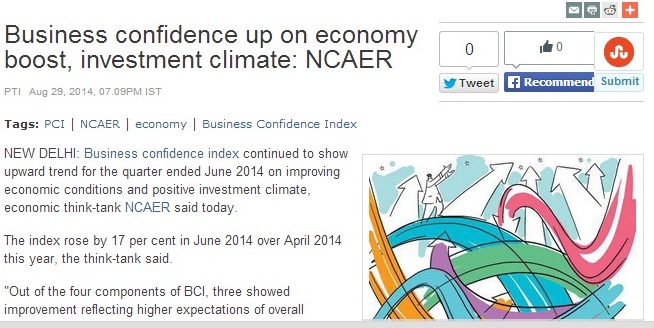 NEW DELHI: Business confidence index continued to show upward trend for the quarter ended June 2014 on improving economic conditions and positive investment climate economic think-tank NCAER said today. The index rose by 17 per cent in June 2014 over April 2014 this year the think-tank said. “Out of the four components of BCI three showed improvement reflecting higher expectations of overall economic growth financial position of the firms and investment climate for the overall economy improved” the National Council of Applied Economic Research (NCAER) said in a release. However as per the Business Expectations Survey conducted by NCAER the marginally lower ratings on capacity utilisation remain an area of concern. Also the Political Confidence Index (PCI) for June quarter surged by 20 per cent over April 2014. All eight components of PCI reflect higher optimism in this round it said. NCAER said the regional distribution of responses reflects mixed perceptions and except the South the other three regions registered higher level of optimism. It said firms with an annual turnover between Rs 100-500 crore showed the highest percentage increase in confidence over the last round of survey. The distribution of firms by ownership type reveals improvement in both public and private sector firms in the present round of the survey. “Increases in production domestic sales exports and pre-tax profits are expected. There is also a positive outlook with respect to employment and wages. The prices of inputs as well as the ex-factory prices of outputs are slated to rise” it said. About PCI public sector firms registered falling confidence levels as against the positive outlook shown by private sector firms in terms of political management of economic policies. “Business plans for capacity expansion expanding into new lines of business and improvement of quality and efficiency depend heavily on favourable budget. There is anticipation of an increased tax rate in the budget of the new government” said the NCAER survey.