Business confidence up as companies bet on turnaround: Survey 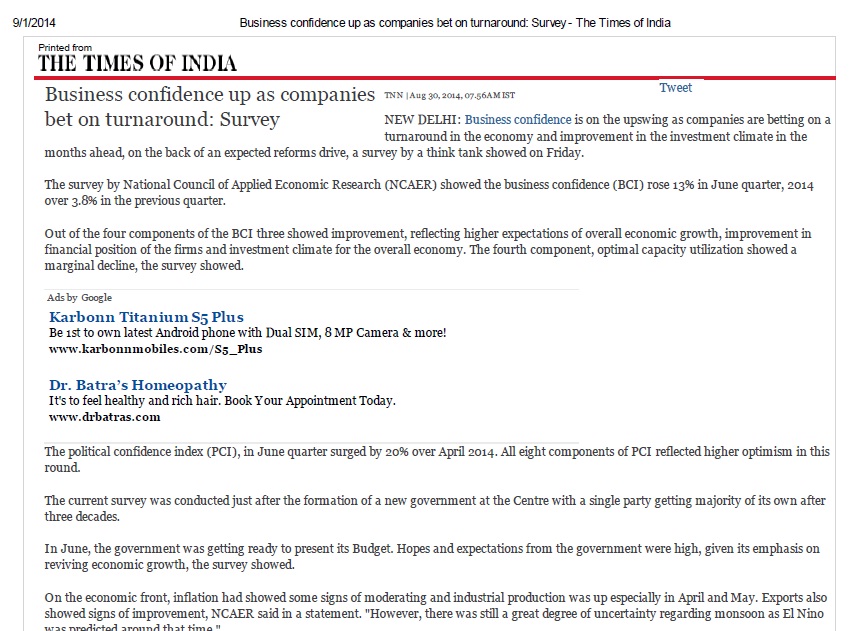 NEW DELHI: Business confidence is on the upswing as companies are betting on a turnaround in the economy and improvement in the investment climate in the months ahead on the back of an expected reforms drive a survey by a think tank showed on Friday.

The survey by National Council of Applied Economic Research (NCAER) showed the business confidence (BCI) rose 13% in June quarter 2014 over 3.8% in the previous quarter.

Out of the four components of the BCI three showed improvement reflecting higher expectations of overall economic growth improvement in financial position of the firms and investment climate for the overall economy. The fourth component optimal capacity utilization showed a marginal decline the survey showed.

The political confidence index (PCI) in June quarter surged by 20% over April 2014. All eight components of PCI reflected higher optimism in this round.

The current survey was conducted just after the formation of a new government at the Centre with a single party getting majority of its own after three decades.
In June the government was getting ready to present its Budget. Hopes and expectations from the government were high given its emphasis on reviving economic growth the survey showed.

On the economic front inflation had showed some signs of moderating and industrial production was up especially in April and May. Exports also showed signs of improvement NCAER said in a statement. “However there was still a great degree of uncertainty regarding monsoon as El Nino was predicted around that time.”
The survey is based on a sample of 629 respondents. NCAER is the country’s oldest and largest independent economic think-tank set up in 1956.

All five major sectors of the economy show an improvement in business sentiments in the present survey over the last round. Although service sector firms have registered the highest BCI in terms of percentage change the manufacturing sector reflects higher optimism than service sector firms in the current survey.

It said the regional distribution of responses reflects mixed perceptions. Except the South the other three regions registered higher level of optimis