An opportunity India must not miss 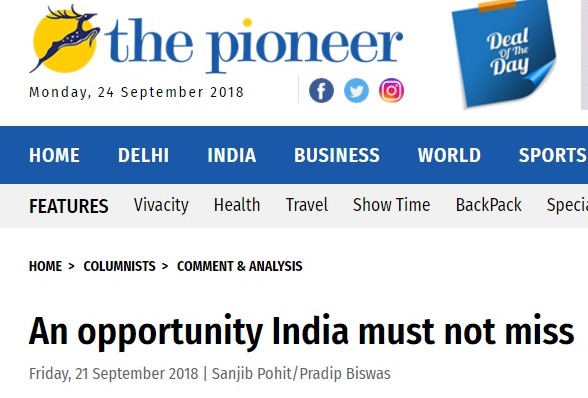 The Government’s launch of a biodiesel programme represents a unique case for the development of numerous sustainable entrepreneurs employment generation empowerment of the subaltern masses by providing them ownership/occupational rights to wasteland and degraded forest land and reduction of carbon footprints without compromising on food security.  In other countries land rights particularly to occupy or use are taken away from traditional users like marginal farmers and cattle grazers and instead transferred to large companies for Jatropha plantation.

Of course local people find jobs in plantation-related activities which in any way will be created irrespective of whether the local people are planters or large corporates. This process of land-grabbing and depeasantisation not only disempowers the local people but also shrinks their traditional sources of livelihood.

In Mexico for example farmers were given subsidies so that they could switch land use from growing traditional crops to Jatropha. In some areas large estates cleared secondary forest land for Jatropha plantation which would have adverse environmental consequences and could also become a cause for concern.

Even in Brazil where the ethanol project for running vehicle was the most successful business the military Government over there played a major role in coercing the farmers to transfer their lands at nominal prices to the corporates for farming sugar cane. State coercion  thus helped the corporates in acquiring and consolidating millions of hectares of land for growing sugarcane.

The Government’s push for the biodiesel programme must be treated as a major innovation and deserves to be implemented more vigorously. The success of this programme will not only help meet energy targets but also help the country fulfill the global commitment to reduce greenhouse gas (GHG) emissions. Besides it will also help save foreign exchange reserves and create employment and entrepreneurial opportunities for millions of poor thereby bringing equity and social justice.

By fixing the biodiesel blending target the State will create a demand for biodiesel which will in turn create demand for entrepreneurs. Similarly by making available land and technology including higher yielding plant varieties and low cost transesterification machineries it will facilitate the supply of entrepreneurs.

The entire biodiesel supply chain has tremendous job potential. To be specific biodiesel production involves four distinct stages namely (i) cultivation of oilseeds bearing plants from which seeds would be harvested; (ii) trading of seeds which involve procurement of seeds from the individual farmers and selling the seeds to the processing factories; (iii) oil extraction from the seeds and transforming the extracted oil to biodiesel through the process of transesterification; and (iv) blending this biodiesel with the petrodiesel and its disposal to individual consumer through retail outlet.

This however does not include people engaged in research and development in various laboratories for the development of appropriate plant varieties as well as those involved in extension work. In the Indian context the nature of entrepreneurship differs at various stages. As a result job creation varies across different stages.

At the feedstock cultivation stage feedstock would be grown in wasteland forestland and surplus land. Marginal small farmers and landless labourers who have wastelands in possession would be  planters and thus the size of plantation would also be small.

In the next stage namely seed  trading) landless people who fail to get access to a wasteland for plantation would be involved in trading seeds. They would purchase seeds from the planters in villages and sell them to the oil extraction plant in the neighbouring urban areas. Like the planters seed traders would also operate at a small scale. Their number would depend on the required frequency of visits to a planter per year — capacity of a trader to visit number of different planters for collecting seeds and their disposal to oil extracting plant usually located in the nearby urban areas.

In oil extraction and biodiesel production which is basically a manufacturing activity a minimum scale of operation is essential for financial viability. Available plant size data indicates wide variation in size — ranging from 100 litre per day in Kochi (Kochi Refineries Ltd) to 5000-10000 tonne per day in Chiplun Pune (Mint Biofuels Ltd). It is obvious that large plants would be suitable where farming is more concentrated as it would enable economies scale up.

On the other hand where farming is scattered which is the case in most of the feedstock growing areas relatively smaller plants would be appropriate.

Thus the manufacturing of biodiesel from seeds also creates substantial opportunities for the development of sustainable entrepreneurship.

What is the possible realm of job creation in this sector? Of course it will depend on several factors such as target level of blending (five per cent 10 per cent or 20 per cent); oil content of seed; average size of land at the cultivation stage; average number of entrepreneur at seed marketing stage and their marketing area and average size of processing plant.

Thus it is clear that back-of-the-envelope calculation also depends on various factors. We have attempted to estimate the same based on our previous estimates from field surveys. Our back-of-the-envelope calculation suggests that a very conservative estimate of meeting only five per cent blending of biodiesel would generate 1.59 million sustainable entrepreneurs of which 1.58 million would be engaged in plantation 8.46 thousand would be in trading and another 2.49 thousand as small and medium-sized manufacturers in biodiesel manufacturing.

Overall fulfilling this conservative target would generate as much as 46.29 million man-days. It can hence be concluded that the biodiesel programme has enormous potential of sustainable entrepreneurship development meeting all the three objectives of economic growth social equity and environmental sustainability.

The Government must therefore put wholehearted efforts to achieve 20 per cent biodiesel blending targets by 2020 if not before.