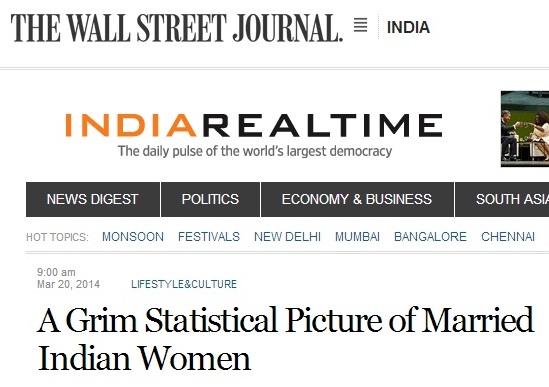 Two in five Indian women didn’t choose their spouse and about one in two was married before the legal age of 18 according to a new study that paints a grim statistical picture of married women across the country.

The National Council for Applied Economic Research a New Delhi-based think tank based their findings on interviews with more than 30000 married Indian women in 2011 and 2012. Women surveyed were between ages 16 and 49 living in over 1500 Indian villages and 971 urban neighborhoods.

Researchers spoke with women about their experience of domestic violence and the situations in which they thought they would be subject to a beating. Just over half — 54% — said women in their community would be beaten up for going out of the house without permission. Some 35% said that not cooking properly would leave them likely to be physically abused and 36% said that inadequate dowry payments would likely lead to a beating. Separately 46% believed that neglecting household duties would result in domestic violence.

“Some steps have been taken to empower women” Sonalde Desai a senior fellow at NCAER who headed the study said. “But this report shows just how grim their situation still is.”

An alarming large chunk of those surveyed – 48%  – said they were married before turning 18 the legal age for women to marry in India. States where women reported the highest underage marriages were Bihar and Rajasthan. About 73% women surveyed in Bihar where three quarters of the population lives in rural areas said they had married underage. In Rajasthan another largely-rural state the figure stood at 70%.

Punjab and Kerala among the richest states in the country have the lowest child marriage rates. In Punjab the figure stood at 13% and in Kerala 14% had married before the legal age.

NCAER also found that even though the dowry system was outlawed in 1961 the practice of giving a groom’s family items such as cash and heavy appliances among other things is still widespread in India. Indian women on average pay more than 30000 rupees or $491 as cash in dowry. The survey also said that about 40% reported their families purchased items such as a television motorbike or car for dowry. India does not maintain official statistics of dowry payments.