A demographic window of opportunity: on population and policy 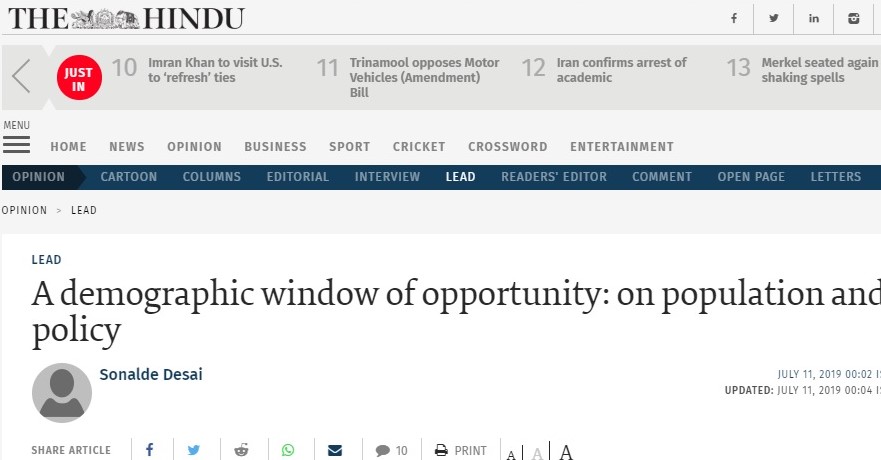 Last month the United Nations released the 26th revision of World Population Prospects and forecast that India will overtake China as the most populous country by 2027. The only surprise associated with this forecast is the way it was covered by the media. Is this good news or bad news? Is it news at all?

Is this news? Not really. We have known for a long time that India is destined to be the most populous country in the world. Population projections are developed using existing population and by adjusting for expected births deaths and migration. For short-term projections the biggest impact comes from an existing population particularly women in childbearing ages. Having instituted a one-child policy in 1979 China’s female population in peak reproductive ages (between 15 and 39 years) is estimated at 235 million (2019) compared to 253 million for India. Thus even if India could institute a policy that reduces its fertility rate to the Chinese level India will overtake China as the most populous country.

The element of surprise comes from the date by which this momentous event is expected. The UN revises its population projections every two years. In 2015 it was predicted that India would overtake China in 2022 but in the 2019 projections it is 2027. The UN has revised India’s expected population size in 2050 downward from 1705 million in 2015 projections to 1639 million in 2019 projections. This is due to faster than expected fertility decline which is good news by all counts.

Like it or not India will reign as the most populous country throughout most of the 21st century. Whether we adjust to this demographic destiny in a way that contributes to the long-term welfare of the nation or not depends on how we deal with three critical issues.

First do we need to adopt stringent population control policies? History tells us that unless the Indian state can and chooses to act with the ruthlessness of China the government has few weapons in its arsenal. Almost all weapons that can be used in a democratic nation have already been deployed. These include restriction of maternity leave and other maternity benefits for first two births only and disqualification from panchayat elections for people with more than two children in some States along with minor incentives for sterilisation.

As demographer Judith Blake noted people have children not birth rates and few incentives or disincentives are powerful enough to overcome the desire for children. Ground-level research by former Chief Secretary of Madhya Pradesh Nirmala Buch found that individuals who wanted larger families either circumvented the restrictions or went ahead regardless of the consequences. As one of her informants noted “The sarpanch’s post is not going to support me during my old age but my son will. It does not really matter if I lose the post of sarpanch.”

Second if punitive actions won’t work we must encourage people to have smaller families voluntarily. There are sharp differences in fertility among different socio-economic groups. Total Fertility Rate (TFR) for the poorest women was 3.2 compared to only 1.5 for the richest quintile in 2015-16. To get to TFR of 1.5 a substantial proportion of the population among the top 40% must stop at one child.

In western societies low fertility is associated with the conflict that working women face between work and child rearing and the individual’s desire to enjoy a child-free life. Not so for Indian couples. In India couples with one child do not consume more nor are women in these families more likely to work. My research with demographer Alaka Basu from Cornell University shows that it is a desire to invest in their children’s education and future prospects that seems to drive people to stop at one child. Richer individuals see greater potential for ensuring admission to good colleges and better jobs for their children inspiring them to limit their family size. Thus improving education and ensuring that access to good jobs is open to all may also spur even poorer households into having fewer children and investing their hopes in the success of their only daughter or son. Provision of safe and easily accessible contraceptive services will complete this virtuous cycle.

Third we must change our mindset about how population is incorporated in broader development policies.

Population growth in the north and central parts of India is far greater than that in south India. What should we do about the old policies aimed at not rewarding States that fail to control population growth? These policies include using the 1971 population to allocate seats for the Lok Sabha and for Centre-State allocation under various Finance Commissions. In a departure from this practice the 15th Finance Commission is expected to use the 2011 Census for making its recommendations. This has led to vociferous protests from the southern States as the feeling is that they are being penalised for better performance in reducing fertility.

There is reason for their concern. Between the 1971 and 2011 Censuses the population of Kerala grew by 56% compared to about 140% growth for Bihar Uttar Pradesh and Madhya Pradesh. A move to use the 2011 Census for funds allocation will favour the north-central States compared to Kerala and Tamil Nadu.

However continuing to stay with a 1971 Census-based allocation would be a mistake. Cross-State subsidies come in many forms; Centre-State transfers is but one. Incomes generated by workers in one State may also provide the tax revenues that support residents in another State. The varying pace of onset and end of demographic transition creates intricate links between workers in Haryana today and retirees in Kerala and between future workers in Uttar Pradesh and children in Tamil Nadu.

Demographic dividend provided by the increasing share of working age adults is a temporary phase during which child dependency ratio is falling and old-age dependency ratio is still low. But this opportunity only lasts for 20 to 30 years. For States such as Kerala and Tamil Nadu which experienced fertility decline early this window of opportunity is already past.

As the United Nations Population Fund estimates over the next 20 years the window of opportunity will be open for moderate achievers such as Karnataka Haryana and Jammu & Kashmir. As the demographic window of opportunity closes for these States it will open for Uttar Pradesh Bihar and other States that are the last to enter fertility transition. This suggests that workers of Bihar will be supporting the ageing population of Kerala in 20 years.

In order to maximise the demographic dividend we must invest in the education and health of the workforce particularly in States whose demographic window of opportunity is still more than a decade away. Staying fixated on the notion that revising State allocation of Central resources based on current population rather than population from 1971 punishes States with successful population policies is shortsighted. This is because current laggards will be the greatest contributors of the future for everyone particularly for ageing populations of early achievers. Enhancing their productivity will benefit everyone.

It is time for India to accept the fact that being the most populous nation is its destiny. It must work towards enhancing the lives of its current and future citizens.

Sonalde Desai is Professor of Sociology University of Maryland and Professor and Centre Director NCAER-National Data Innovation Centre. The views expressed are personal