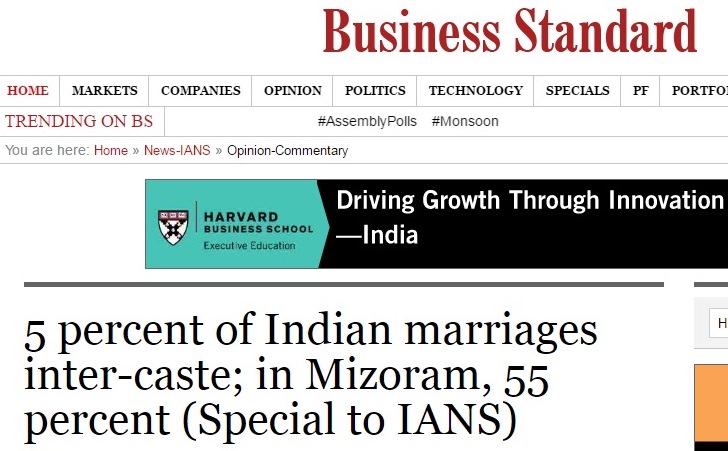 Christian-dominated Mizoram – 87 percent of the population is Christian – has the most inter-caste marriages in India a nation where 95 percent of Indians marry within their caste according to a 2016 report from the National Council of Applied Economic Research (NCAER) a New Delhi-based think-tank.

Meghalaya and Sikkim followed Mizoram with 46 percent and 38 percent of inter-caste marriages according to The Indian Human Development Survey (IHDS-II) based on nationwide surveys conducted between 2011-12. It was put together by the University of Maryland and NCAER. A representative sample of 41554 households contacted for the study was spread across 33 states and union territories in rural and urban India.

The three north-eastern states were followed by Muslim-dominated Jammu and Kashmir (35 percent) and Gujarat (13 percent).

The data belies the perception that with modernity and economic progress traditional barriers of caste have broken down.

The caste system is an ancient relic of a social hierarchy once based on division of labour. People are born into their caste. They cannot change it.

How do people marry in the states of India?

As many as 95 percent women surveyed said their husbands’ caste was the same as their’s. This was the question NCAER used to determine the proportion of inter-caste marriages: “Is your husband’s family the same caste as your native family?”

In Madhya Pradesh almost all (99 percent) people were married in their own caste followed by Himachal Pradesh and Chhattisgarh both at 98 percent.

Indians are legally allowed to marry outside their caste. A law on inter-caste marriage was passed more than 50 years ago but those who do are still threatened or attacked often by their own families.

Change is slow but it is coming

As many as 27 percent of respondents said they knew people in their communities who married outside their caste. In cities this number was 36 percent.

The IHDS-II surveyors asked respondents: “Do you know anyone in your community who has had an inter-caste marriage?”

People are more forthcoming with perception of others than information about themselves the researchers found.

“Think of a village pradhan (chief) whom everyone knows? there is only one pradhan in a village. Knowing someone particularly someone who has engaged in ‘unusual’ behavior like inter-caste marriage is always going to be higher than one doing it oneself” Sonalde Desai a demographer senior fellow at NCAER and professor of Sociology at University of Maryland told IndiaSpend. “I am surprised that only one in four individuals knows someone (in an) inter-caste marriage.”