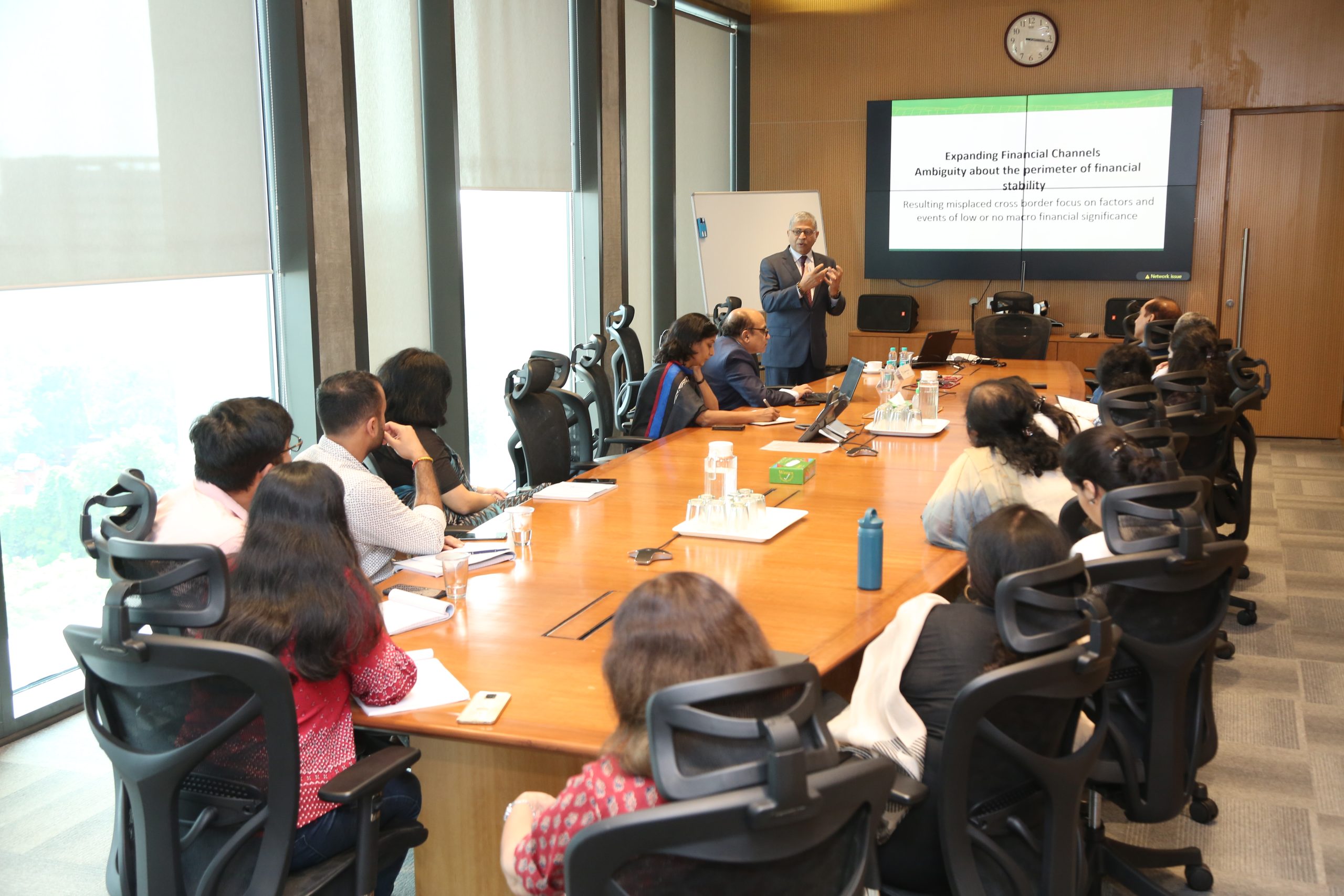 In his presentation, Mr Udaibir Das noted that economic and financial uncertainty has spiked once again and pointed to six fissures in the global financial system (GFS): (i) contagion effects that may arise from non-bank financial intermediaries, whose share in the markets and interconnectedness has increased, (ii) endogeneity of capital flow, (iii) growing importance of macro-financial channels of propagation of protuberance of shocks to financial stability, (iv) challenges for surveillance and monitoring of systemic risk amid growing ability of asset managers in transmitting global liquidity that has come about with a sharp rise in private debt, (v)  hidden leverage in market-based finance, emanating especially from digital finance and climate finance with added risks from sanctions and cyber frauds, and (vi) risks that may surface with needed ex-ante whistleblowing tools.

He also warned that the doom loop (bank-sovereign getting inseparably exposed to each other) was getting longer and thicker, and that channels of crisis were shifting in many ways. He added that financial conditions were getting tighter, reflected in rising costs of external borrowing by emerging markets. The two crucial aspects of the GFS are the ‘connectedness conundrum’ and the ‘endogeneity of finance.’ The connectedness conundrum is driven by the persuasive viewpoint of the neo-liberals to liberalise and let market forces prevail. Cross-border financial intermediation is taking place across new players and new platforms. In this backdrop, the following questions assumed importance:

Mr Das also drew focus on the critical priority for the GFS to take care of climate finance needs to build upon climate resilience. The world urgently needed to transit to low-carbon, just and sustainable development path. While this was a collective action problem, unwieldy protracted negotiations were taking place. The financing needs were large, estimated at US$4-5 trillion per year through 2050. Both physical and transitional risks were important. Unattractive risk-return profiles in unproven markets and lack of scalable quality projects, besides shortage of adaptation finance, were hindrances, but a lot of toolkits were in works.

He concluded that repair, reforms, and a ‘do whatever it takes’ approach were needed to address fractures, fissures, and fragmentation in the GFS. He called for a panoptic policy approach with an integrated policy framework and a concrete architecture.

At the end of his talk, Mr Udaibir Das engaged in a brief fire-side chat with Dr Mridul Saggar, IEPFA Chair professor, NCAER, who had earlier during his career with the central bank coordinated the India FSAP 2017 from the side of the Indian authorities. Dr Saggar pointed out that while uncertainty has risen of late, it was well below the GFC levels. Also, global financial regulatory reforms had built strong capital and liquidity buffers to cope with new shocks. He, however, outlined the risks to macro-financial stability emanating from increasing digitalisation of the economy, which while not yet acquiring systemic proportions necessitate deeper surveillance and regulation of the financial system.

The seminar ended with a Q & A session in which Mr Das took questions from the floor. In the floor discussion, the NCAER Director General, Dr Poonam Gupta flagged the issues of performance of emerging markets, the phenomenal increase in public debt, and the rise in inflation both in India and across the world.

Dr Pallavi Choudhry, Senior Fellow, NCAER, pointed out that the risk profile of the US banking system has fundamentally changed after the repeal of the Glass Stegall Act and that the Dodd-Frank Act hadn’t essentially addressed the problem.

Udaibir Saran Das is a former central banker and a senior international policy expert on the financial system and central banking policies. He has worked in different capacities at the International Monetary Fund, the World Bank, the Bank for International Settlements, the Bank of Guyana, and the Reserve Bank of India. Mr Das has been closely associated with the work of the Financial Stability Board and other international standard-setting bodies, including the Basel Committee for Banking, and was on the faculty of the Questrom School of Business at Boston University. Mr Das has managed the global Financial Sector Assessment Program (FSAP) and participated in developing internationally accepted strategies, policies, and tools for systemic risk analysis, financial stability monitoring, stress testing, debt and reserves management, and sovereign wealth funds. He has led macro-financial surveillance and capacity-building missions to advanced, emerging, and developing markets such as China, France, Indonesia, Japan, Korea, Mongolia, Tanzania, The Philippines, and the United Kingdom. Until recently, Mr Das oversaw financial and monetary sector developments in Asia, the Pacific, and Europe for the IMF. His current areas of study focus on how the ongoing demographic, climatic, and technological transformation is altering the financial policies landscape and its implications for global practices and emerging markets.