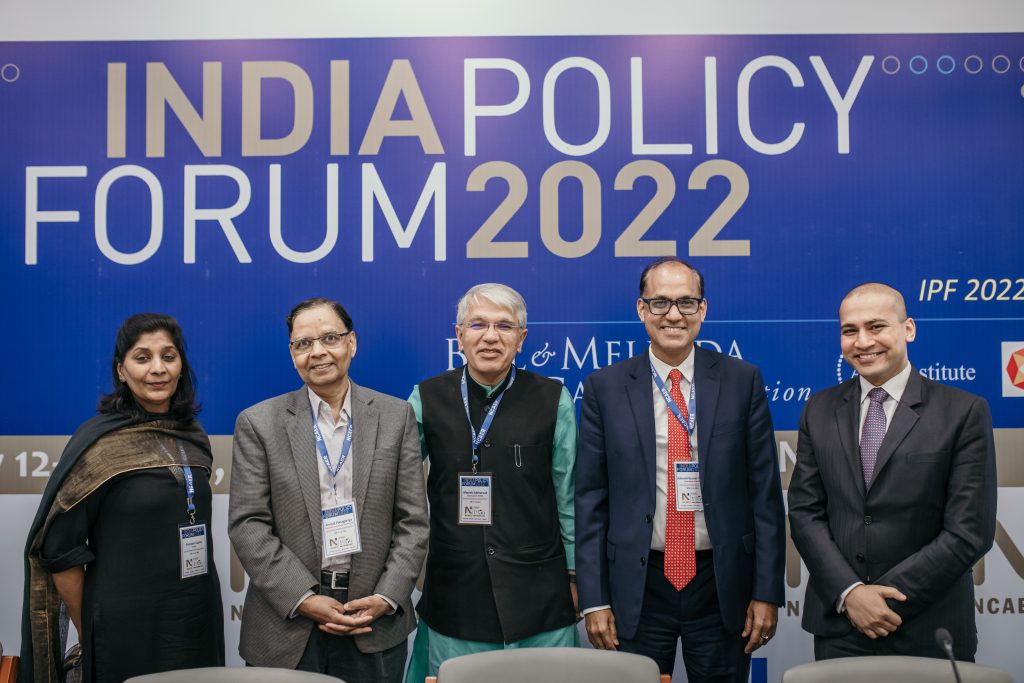 NCAER hosted its annual flagship event, the India Policy Forum (IPF) from July 12-13, 2022. The event was held in person at the India International Centre and NCAER in New Delhi.

Every summer, the NCAER IPF brings to New Delhi a unique combination of intense scholarship and policymaker engagement through this forum that aims to promote rigorous empirical economic policy research on India through commissioned papers, which are then published in the form of an annual volume. In addition, the IPF also features public lectures by eminent experts and roundtable discussions on critical issues.

The 19th edition of the IPF was attended by a galaxy of eminent policymakers, economists, academics, and researchers. The proceedings at the conference deliberated on five research papers, covering a range of diverse sectors and subjects, including entrepreneurship, banking, disease surveillance, trade, services, and ways to accelerate formal jobs and wages through larger firms.

Commenting on the 19th IPF, the NCAER Director General, Dr Poonam Gupta stated, “The IPF stands out for the vigorous review and state-of-the-art analysis of key economic issues of concern to India. It is heartening to the distinguished gathering collected here to engage with each other at the Conference in person after three years when the COVID health crisis had compelled us to switch to the digital mode.”

In a paper titled, ‘Privatization of Public Sector Banks in India: Why, How and How Far’, presented on 12 July 2022, the authors Dr Poonam Gupta and Dr Arvind Panagariya made a case for privatisation of all public sector banks (PSBs) except the State Bank of India. This is because private banks have emerged as a credible alternative to PSBs with substantial market share and the status quo will result in further erosion of the market share of PSBs toward oblivion, while impeding India’s economic growth and inflicting substantial costs onto the depositors, firms, taxpayers and the government as their majority owner.

A paper on “Lessons from Disease and Economic Surveillance during COVID in India” by Professor Anup Malani uses the lessons learned during the current pandemic to suggest ways to gather intelligence for the next pandemic in India and stresses the value of population-level surveillance; understanding the incentives and disincentives for surveillance and reporting; and, tailoring policy to the results of surveillance.

While chairing the session on ‘The US-China Trade War and India’s Exports’, on 13th of July 2022, Mr B.V.R. Subrahmanyam, Secretary, Ministry of Commerce and Industry, highlighted the gaps and pain points in the country’s trade promotion policy. He stated, “Exports do not merely represent a one-way process but this is a two-way street, as it also includes imports….Although the Government has initiated large-scale restructuring in the exports arena, it still needs to do much more to exploit the available windows of opportunity because India is currently in a sweet spot with all external stakeholders wanting India to succeed in this area.”

A Policy Roundtable at the event on  ‘Accelerating Formal Jobs, Higher Wages, and Larger Firms’, focused on a critical issue facing the country, the need for accelerating the creation of formal jobs and higher wages through larger firms for boosting economic growth. Mr Rajesh Aggarwal, Secretary, Ministry of Skill Development and Entrepreneurship, pointed out, “Data suggests that though we are skilling people in the rural areas, we find that these people migrate to the urban areas for employment….In this context, we must remember that clusters will grow, urbanisation will increase, and globalisation will continue unchecked, and any policy on skilling and job generation needs to keep these dynamics in mind.”

According to Mr Sanjeev Sanyal, Member of the Economic Advisory Council to the Prime Minister, the issue of generation of more intuitive and better-paying jobs lies in the evolution of “Agglomeration economies versus economies of scale, [as the former] are a reality.” He concluded, “This is also a political economy challenge, in view of the fact that the high-paying jobs are presently concentrated among the highly educated people in the urban areas.”

Day 1 of the Conference ended with the IPF Annual Lecture on ‘Trade Policy for the Twenty-first Century’, delivered by Professor Anne Krueger, Senior Fellow at the Johns Hopkins University, Emeritus Professor at Stanford University, and former First Deputy Managing Director of the International Monetary Fund. This session was chaired by Professor Arvind Panagariya, Columbia University and former Vice Chairman of NITI Aayog.