The FINDEX Report, 2022 and Challenges and Opportunities for Leveraging Digital Technology for Financial Inclusion in India 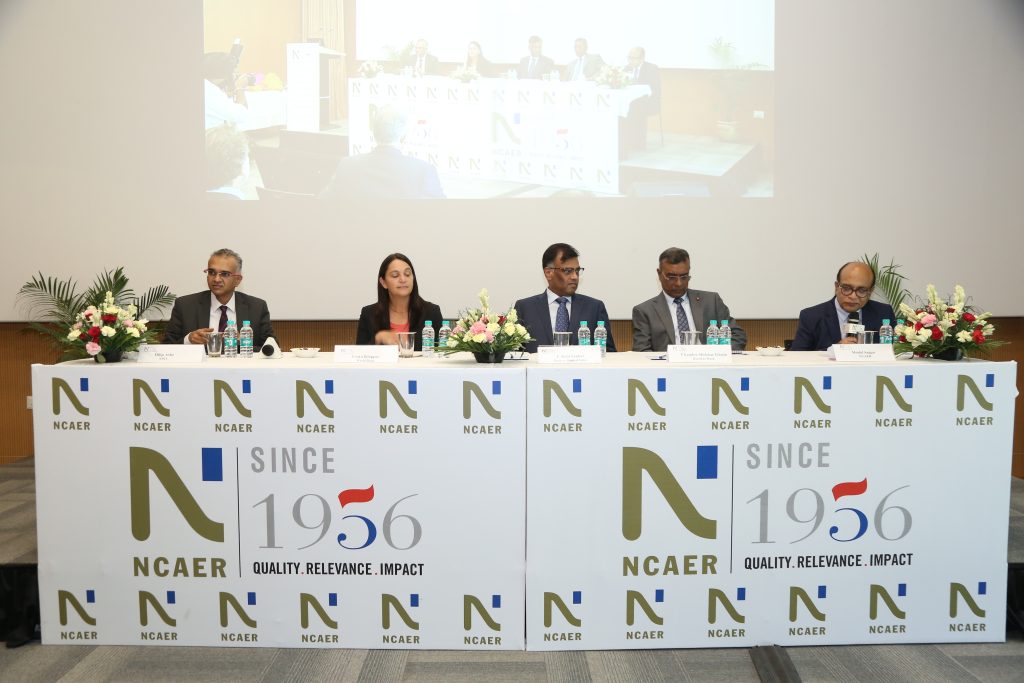 NCAER organised an in-person seminar on September 12, 2022, covering the World Bank’s FINDEX Report, 2021, released in June 2022 and in the backdrop of the Report also discussed the theme, “Challenges and Opportunities for Leveraging digital Technology for Financial Inclusion in India”. The seminar was attended by a number of eminent officials from the banking community and the World Bank, mediapersons, and other stakeholders.

Delivering a keynote address on the occasion, Mr T. Rabi Sankar complimented the recent FINDEX Report for focusing on digital financial inclusion. He noted that the FINDEX database shows that the number of bank accounts in India has gone up by a phenomenal 76 per cent over the last 10 years, which is remarkable. Of these, 61 per cent of the account holders made digital payments from their accounts, going up from 35 per cent in 2014. This is a clear indicator of the digital growth that we are making in India. He added that there was a notable rise in daily digital transactions, which have gone up from 40 million in 2011 to 290 million in August 2022. A majority of these transactions were made through the Universal Payments Interface (UPI). He also pointed out that the database shows that the gender gap in bank account ownerships has been completely bridged but expressed concern that there was a 17 per cent gender gap in the use of digital payments that still needs to be bridged. He added that the RBI was trying to address this and various other challenges as it has a vision for devising a national strategy for achieving universal financial inclusion in the country. He also said that RBI has sought to provide a regulatory framework that creates and reinforces the enablers, adding that inter-operability, security, cost efficiency and digital literacy were its building blocks.

He also said that with greater digitisation, data had become important as it could be monetised. He told the gathering that there was demand from corporates to share UPI data and such sharing could help them and FinTechs to bring out structured products targeted to specific segments of population. However, to enable this a law to protect data privacy will be needed. He explained that “we will have to primarily have laws in place followed by regulations which ensure that customer data is not only safe and privacy is not only protected, but the monetisation of customer data is done in a responsible manner with some level of customer consent.”

In a Panel Discussion on “Challenges and Opportunities for Leveraging Digital Technology for Financial Inclusion in India”. The panelists at the discussion included Dr Leora Klapper, Lead Economist in the Finance and Private Sector Research Team at the World Bank; Mr Dilip Asbe, the Managing Director and Chief Executive Officer of National Payments Corporation of India (NPCI); Mr Chandra Shekhar Ghosh, Managing Director and Chief Executive Officer of Bandhan Bank and Dr Mridul Saggar, the IEPF Chair Professor at NCAER and former Executive Director of RBI, who moderated the discussion. Dr Klapper said, “Financial inclusion initiatives must also consider the financial capability of the users, given the common feeling among unbanked people in India that they could not use an account by themselves. Effective onboarding and ongoing product education could help people benefit from an account and avoid fees, inappropriate products, or exploitation. Improved digital literacy, data security, and grievance mechanisms could increase the share of adults who use digital transactions, as well as reduce the large number of inactive accounts.”

Mr Dilip Asbe was of the view that the regulatory ecosystem had enabled the digital services to grow in an orderly fashion in India in contrast with many other emerging markets. He also clarified that though the Pradhan Mantri Jan-Dhan Yojana (PMJDY) has resulted in tremendous progress in bank account opening, it had several other components dovetailed to it, including insurance, pension, debit card transactions, and even credit. He said technology can now help in further progress on this road. On a specific question by Dr. Saggar, whether the policy thrust should be more on offering more digital products on feature phones or on making smart phones cheaper and accessible to all with the help of PLI scheme, Dilip Asbe clarified that customer experience is very important and the payment experience on a feature phone has to be better. “Unless that is done, making the customer move from assistant mode to self-sufficiency mode is very difficult,” he added. However, he added that there was need for both and products that can be on-boarded on both. Mr Chandra Shekhar Ghosh detailed the micro-story behind financial inclusion and financial literacy. He emphasised that Bandhan Bank was making considerable efforts to empower women and bridge the gender bank.

Dr Mridul Saggar concluded the discussion by suggesting that while India had made a giant leap in financial inclusion, there was scope to do more with the help of technology. Despite the proportion of the population having bank accounts more than doubling from 35 per cent in 2011 to 77 per cent in 2021, India still had the largest absolute number of unbanked population. We have not leveraged the technology enough to support financial inclusion. The opportunity provided by mobile money accounts was under-utilised as such accounts comprised just 4.6 per cent of the total number of bank deposit accounts. He also noted that a Schumpeterian creative destruction was taking place with the use of digital technology, and that it is important to regulate platform-based finance constructively to further financial access.

The Panel Discussion was followed by a presentation on the FINDEX Report, 2021, by Dr Leora Klapper. During her presentation,  Dr Klapper, who is also co-author of the Report, flagged the following salient points: (i) Digital financial services (mobile money, cards, and e-wallets) have catalysed account usage around receiving and making payments, saving, storing money, and borrowing; (ii) Mobile money in Sub-Saharan Africa and Asia has driven growth in account ownership, digital payments, and formal savings; (iii) In developing economies, the gender gap across access and usage remains – but has significantly narrowed; and (iv) In many economies, the pandemic accelerated the use of digital payment.

The World Bank has, since 2011, been producing the FINDEX Database/Report once in three years, covering financial inclusion parameters for about 130 countries worldwide. The latest Report contains data for 2021 on the theme “Financial Inclusion, Digital Payments, and Resilience in the Age of COVID-19”.