State of the Economy Seminar July 2019

NCAER presented its Quarterly Review of the Economy, covering the performance of the Indian Economy in the first quarter of 2019-20 and forecast for the year ahead at this seminar held at NCAER. Organized as an integral part of the Quarterly Review, this seminar brought together policymakers, industry leaders and researchers for a discussion.  Bornali Bhandari and Sudipto Mundle, NCAER, presented the analysis and key findings of the report. Devendra Pant from India Ratings and Research and Subhomoy Bhattacharya, Business Standard were invited as discussants. The seminar also hosted a presentation on Fintech: Prospects, Challenges and Opportunities by Mitul Thapliyal, Partner, MicroSave Consulting. 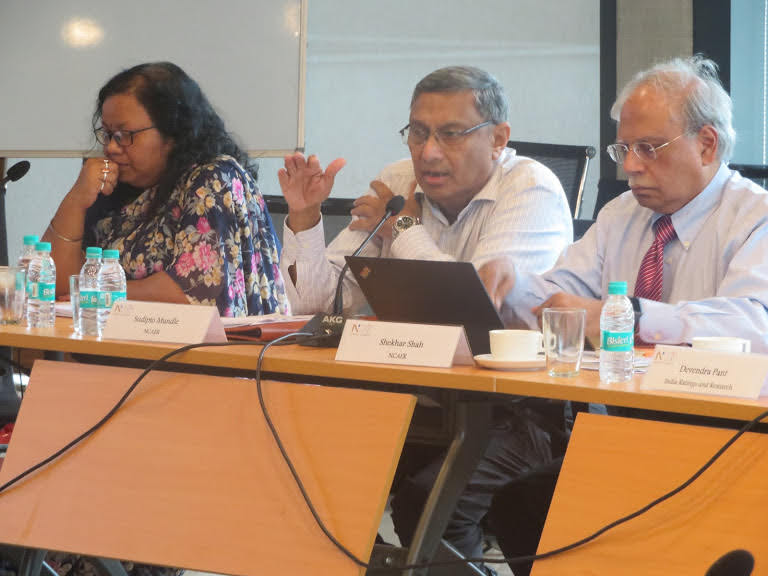 In 2019–20, the real agriculture GVA is envisaged to grow at zero per cent, real industry GVA at 6.1%, and real services GVA at 6.9%. The Wholesale Price Index (WPI) inflation is projected at 2.6%. The growth rates in exports and imports, in dollar terms, are estimated at 4.4% and 3.3%, respectively. The current account balance and central fiscal deficit, as percentages of GDP, are projected at –0.6% and 3.5%, respectively.

Agricultural growth collapsed in the last two quarters of 2018-19.  The prospects for 2019-20 for the agricultural sector, in particular, depend largely on the south-west monsoon. As of 5 August, 2019, out of a total number of 36 agro-meteorological sub-divisions in the country, three had received excess rainfall, 21 had received normal rainfall, while the remaining 12 sub-divisions had received deficient rainfall. And the country as a whole has received 7% below normal rainfall by 5th August 2019. Further, the country has experienced temporal variations in rainfall.  The mixed performance of the agricultural sector has led to a high rate of inflation for food articles, which was observed to be 6.8% during the period April to June 2019-20 as compared to 1.5% during the same period last year.

While the annual data for the services sector shows decline since 2015-16, the quarterly data shows mixed patterns.  These mixed patterns of growth continued in 2019-20:Q1. Aggregate deposits and tourist arrivals showed a marginally higher positive growth in April-May 2019-20. In contrast, the goods traffic by Indian Railways, cargo handled at major ports, and cumulative addition in the total telephone and bank credit to the commercial sector showed weaker y-o-y growth in 2019-20:Q1. Production in the commercial vehicle and aviation sectors (including in both the domestic and international segments) showed significantly slower growth in the first two months of the current fiscal.  The Nikkei India PMI services Index fell from 52.6 in 2018-19:Q4 to 51.1 in 2019-20:Q1.

In the external sector, exports and imports have also shown a sliding growth pattern. The total Indian exports (merchandise and services) for the first quarter of FY 2019-20 amount to US$ 137.3 billion, attaining a growth of 3.14% on a y-o-y basis. The total Indian imports for the same period are valued at US$ 164.5 billion, exhibiting a growth of 3.6% on a y-o-y basis. Consequently, the overall trade deficit for April–June 2019–20 stood at US$ 27.2 billion.  While the trade deficit as a ratio to GDP has declined, the rupee has shown appreciation.

In the monetary space, the Reserve Bank of India (RBI) cut the benchmark policy repo rate to 5.75% in June 2019, its third consecutive cut since February 2019. With inflation well below the mandated target, the Monetary Policy Committee (MPC) switched to an accommodative policy stance, largely seen as being an indicator that the RBI is keen to support economic growth.  The data shows that despite a reduction in interest rates, there has been a weak transmission to either deposit or lending rates. Non-food credit showed a slower y-o-y growth of 12 per cent in 2019-20:Q1 versus 12 per cent in 2018-19:Q4. However, M3 y-o-y growth has remained virtually stable at 10.1% in 2019-20:Q1 versus 10.2% in 2018-19:Q4.

The IMF projections for all major countries/groups show reduced growth in 2019 compared to 2018.  Sliding export growth is likely to persist.  Unrealistic tax revenue and expenditure proposals imply strong expenditure compression in 2018-19 likely to be followed by further expenditure compression in 2019-20.  With all autonomous demand drivers sliding i.e. exports, investment, government expenditure, growth in 2019-20 is likely to slide further.  Shift to expansionary monetary policy and further lowering of Repo rate may not be effective because transmission to interest rates is not working.  This is mainly because interest rates on alternative financial savings instruments like NSS etc. remain high.  Government may reduce NSS etc. interest rates or allow large slippage in fiscal deficit, but both are unlikely.  Therefore, growth may slip further in 2019-20 to 6% (±0.5%).

About the Quarterly Review of the Economy

The Quarterly Review of the Economy has been designed to meet the needs of policymakers, corporates, and others interested in tracking the latest developments in the Indian economy. It provides an analysis of current policies and tracks developments in both the domestic as well as the global economies. The growth forecasts of NCAER are objective and are widely quoted and referred to in both the Indian as well as international media. An integral part of the Quarterly Review are the State of the Economy seminars, organised quarterly at NCAER, which bring together policymakers, industry leaders, and researchers at one forum.