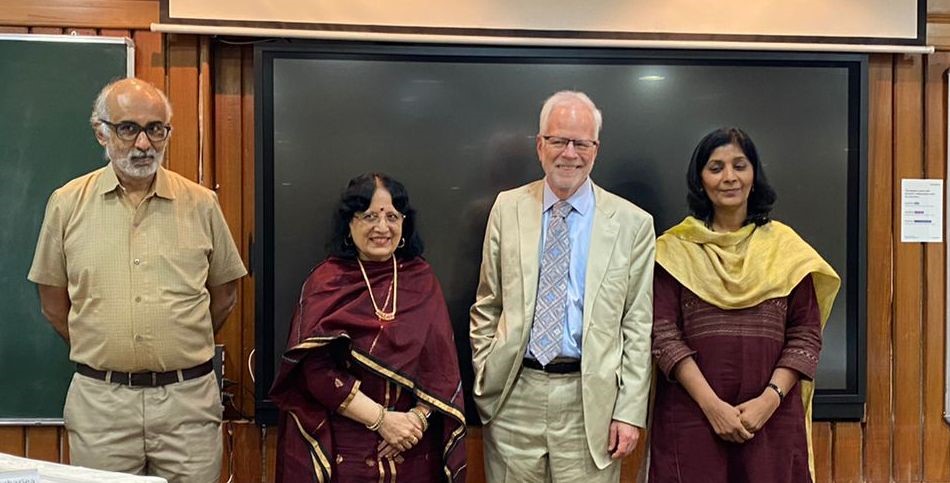 Barry Eichengreen, Distinguished Visiting Professor at NCAER, and Professor of Economics and Political Science at the University of California, Berkeley, delivered a public lecture titled, “The Stealth Erosion of Dollar Dominance”, at the Amex Hall, Delhi School of Economics, University of  Delhi, on Friday, August 5, 2022.

The lecture was organised by NCAER in collaboration with the Delhi School of Economics (DSE). The opening remarks were delivered by Dr Poonam Gupta, Director General, NCAER, and Dr Aditya Bhattacharjea, Professor of Economics, DSE. The lecture was moderated by Dr Pami Dua, Professor and Director, DSE. The focus of the lecture was the purported slow decline of the dominance of the US dollar, which is ostensibly giving way not to another major currency like the Chinese Renminbi, the Euro or the British pound, but to a swarm of midget currencies, including the Canadian dollar, Australian dollar, and Swedish Kroner, among others. He also discussed whether the dominance of the US dollar was boosting or hurting the global economy.

Professor Barry Eichengreen is George C. Pardee and Helen N. Pardee Chair and Distinguished Professor of Economics and Political Science at the University of California, Berkeley, where he has taught since 1987. He is also Distinguished Visiting Professor at NCAER. He is a Research Associate of the National Bureau of Economic Research (Cambridge, Massachusetts) and Research Fellow of the Centre for Economic Policy Research (London, England). In 1997-98 he was Senior Policy Advisor at the International Monetary Fund. He is a fellow of the American Academy of Arts and Sciences (class of 1997).

Professor Eichengreen has held Guggenheim and Fulbright Fellowships and been a fellow of the Center for Advanced Study in the Behavioral Sciences (Palo Alto) and the Institute for Advanced Study (Berlin). From 2004 to 2020, he served as convener of the Bellagio Group of academics and officials. He is a regular monthly columnist for Project Syndicate.

Professor Eichengreen was awarded the Economic History Association’s Jonathan R.T. Hughes Prize for Excellence in Teaching in 2002 and the University of California at Berkeley Social Science Division’s Distinguished Teaching Award in 2004. He is the recipient of a doctor honoris causa from the American University in Paris, and the 2010 recipient of the Schumpeter Prize from the International Schumpeter Society. He was named one of Foreign Policy Magazine’s 100 Leading Global Thinkers in 2011. He is a past president of the Economic History Association (2010-11 academic year).