‘Conversations with NCAER’ | Digital Currencies: What does the future hold? (First webinar) 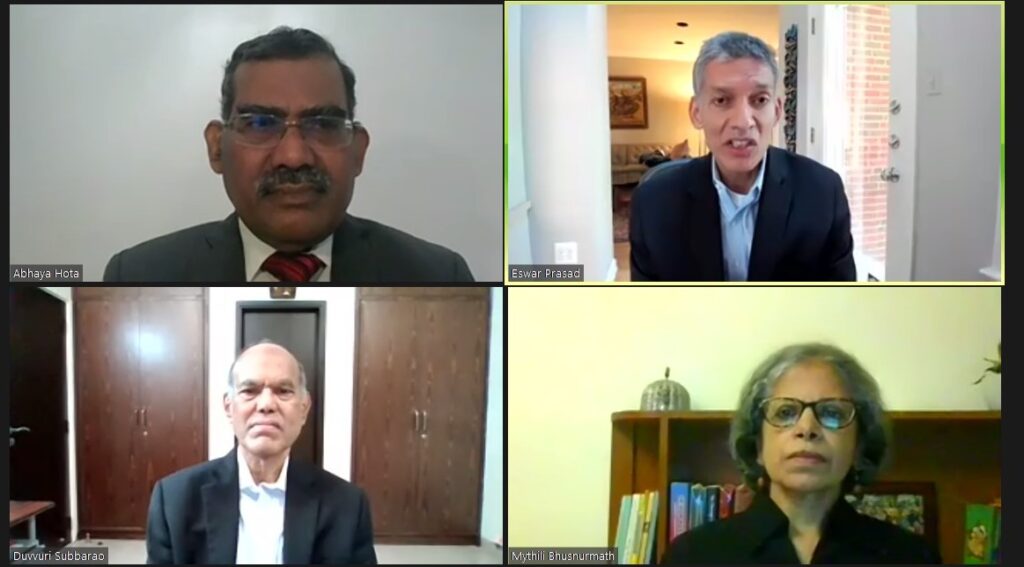 The first in a new monthly webinar series , ‘Conversations with NCAER’ instituted by NCAER was organised on October 18, 2021. This webinar series revolve around discussions with experts on topical issues in the macroeconomic arena. For the first conversation on Digital Currencies: What does the future hold, NCAER invited Professor Eswar Prasad, Tolani Senior Professor of International Trade Policy at Cornell University and Senior Fellow at the Brookings Institution, where he holds the New Century Chair in Economics, Dr D Subbarao, former Governor, Reserve Bank of India and Mr AP Hota, former MD and CEO, National Payments Corporation of India, the umbrella organisation for operating retail payments and settlement systems in India, and the main driving force behind digitisation in India as panelists. The discussion was moderated by Ms Mythili Bhusnurmath, Senior Advisor, NCAER. 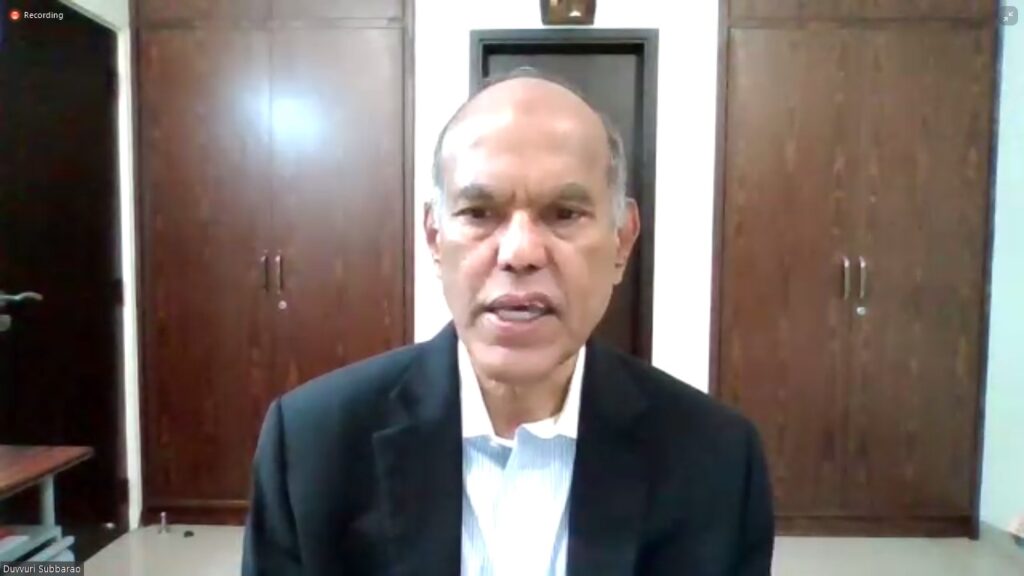 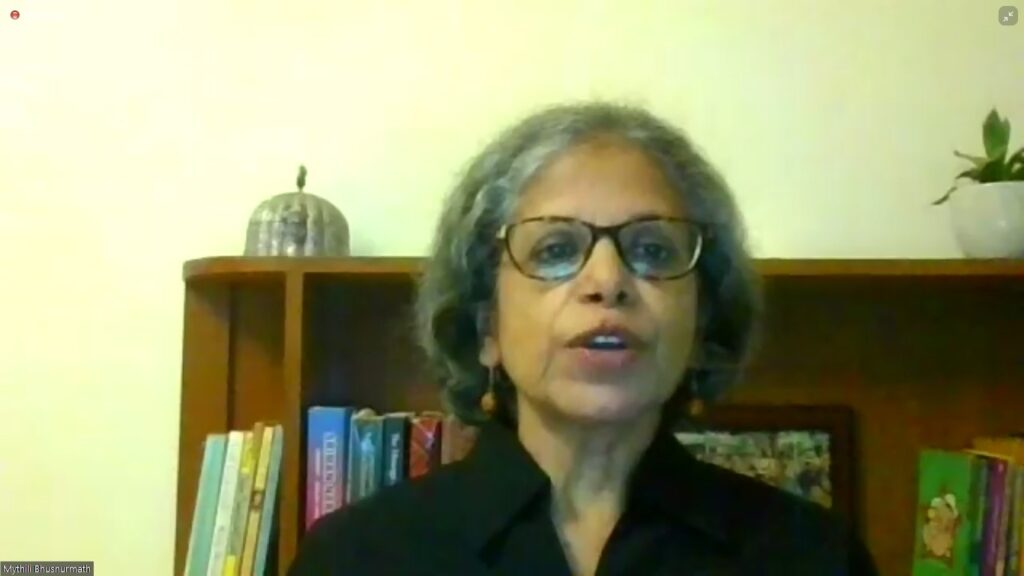 Digital currencies, that is, cryptos, stable coins and central bank digital currencies are grabbing eyeballs and headlines all over the world. As of September 2021, the total market value of all the crypto assets had surpassed $2 trillion, signifying a ten-fold increase since early 2020. The rise of virtual currencies has been accompanied by the emergence of an entire ecosystem – exchanges, wallets, miners, and issuers – posing a challenge to countries across the world.  As crypto assets become more mainstream, their importance in terms of potential implications for the wider economy is bound to increase. What are the risks, the opportunities, the merits and demerits of virtual currencies and the path-breaking block chain technology underlying these currencies? The rich discussions in this webinar and the Q&A that followed strived to de-mystify all this and more.

What are the risks, the opportunities, the merits and demerits of virtual currencies and the path-breaking block chain technology underlying these currencies? This webinar on Digital Currencies: What does the future hold? seeks to de-mystify all this and more. 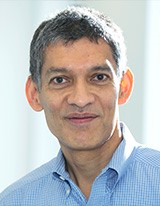 Eswar Prasad is the Tolani Senior Professor of Trade Policy and Professor of Economics at Cornell University. He is also a Senior Fellow at the Brookings Institution, where he holds the New Century Chair in International Economics, and a Research Associate at the National Bureau of Economic Research. He was previously chief of the Financial Studies Division in the IMF’s Research Department and, before that, was the head of the IMF’s China Division.

Prasad’s latest book is The Future of Money: How the Digital Revolution is Transforming Currencies and Finance (Harvard University Press, 2021). He is also the author of Gaining Currency: The Rise of the Renminbi (Oxford, 2016) and The Dollar Trap: How the U.S. Dollar Tightened Its Grip on Global Finance (Princeton, 2014). Prasad has testified before the Senate Finance Committee, the House of Representatives Committee on Financial Services, and the U.S.-China Economic and Security Review Commission. He is the creator of the Brookings-Financial Times world economy index (TIGER: Tracking Indices for the Global Economic Recovery). His op-ed articles have appeared in the Financial Times, Foreign Policy, Harvard Business Review, International Herald Tribune, New York Times, Wall Street Journal, and Washington Post. 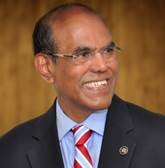 Duvvuri Subbarao was the Governor of the Reserve Bank of India for five years (2008-13). Prior to that, Subbarao served as the Finance Secretary to the Government of India, and as Secretary to the Prime Minister’s Economic Advisory Council 2005-07. He was also a Lead Economist in the World Bank 1999-2004. As a career civil servant for over 35 years, he worked in various positions in the state government of Andhra Pradesh and in the central government in New Delhi mostly in the area of public finance management. He has most recently been a Distinguished International Fellow at the University of Pennsylvania, and has served as a Distinguished Visiting Fellow at the National University of Singapore.
He has written and spoken extensively on issues in macroeconomic management, public finance and financial sector reforms. During his tenure at the Reserve Bank, he was also recognised as a leading exponent of central banking issues from an emerging market perspective. He holds a Masters in Physics from the Indian Institute of Technology, Kanpur, and an MS in Economics from Ohio State University, and studied Public Finance from MIT as a Humphrey Fellow. He earned his PhD in Economics from Andhra University in India. 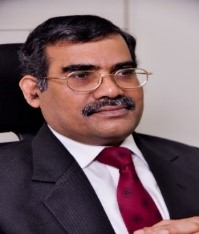 A P Hota, former Managing Director and CEO of National Payments Corporation of India (NPCI) was also the Head of Department of Payment and Settlement Systems (DPSS) at Reserve Bank of India (RBI). He combines the experience of a central banker with that of a service provider in digital payments.
During his tenure at NPCI as founder MD and CEO during the period February 2009 to August 2017, a host of game changing electronic payment products like Immediate Payment System (IMPS), RuPay Card- India’s domestic card network, Aadhar Payments Bridge (APB), Aadhar Enabled Payment System (AEPS), Electronic Toll Collection (ETC) System, Bharat Bill Pay System (BBPS) and the most talked about payment platform named Unified Payments Interface (UPI) were introduced.  All these products have transformed India’s payments landscape   during the past 5-7 years. Post retirement from RBI and NPCI, Shri Hota now serves as an Independent Director on the Boards of a few institutions and advises in the area of national strategy in payments.

Mythili  Bhusnurmath is Senior Advisor, NCAER and Consulting Editor, ET Now TV. She holds a Master’s in Economics from the Delhi School of Economics and is Certified Associate of the Indian Institute of Bankers. She also holds a law degree from Delhi University.