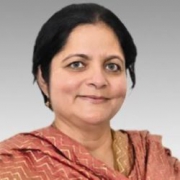 Sonalde Desai, Professor at NCAER, who holds a joint appointment at University of Maryland, USA, has recently been appointed as Distinguished University Professor (DUP) at the University. DUP status is a permanent honorific title that recognises exceptional records in research, teaching, and service. It is the highest academic honour bestowed by the University, awarded to less than 7 per cent of tenured faculty.

Professor Desai was conferred this honour on the basis of her work with the India Human Development Survey (IHDS), and research on gender and class. The IHDS is a panel survey conducted

jointly by NCAER and University of Maryland in two rounds in 2003-04 and 2011-12. The third round of the survey is on the anvil and slated to start soon. This survey is used by more than 11,000 researchers worldwide.

Lauding Professor Desai on the appointment, Professor Jeff Lucas, Chair, Department of Sociology, University of Maryland, said, “…The letters we received from external evaluators, highly esteemed sociologists and demographers, showed just how respected Sonal is in the discipline and how widely her research, training, and service have reached. They noted a remarkable breadth of research and a near unparalleled impact on the field.”

Hearty congratulations to Professor Desai on this unique achievement!